The shadow of Brexit on Belfast's 'Peace Walls' 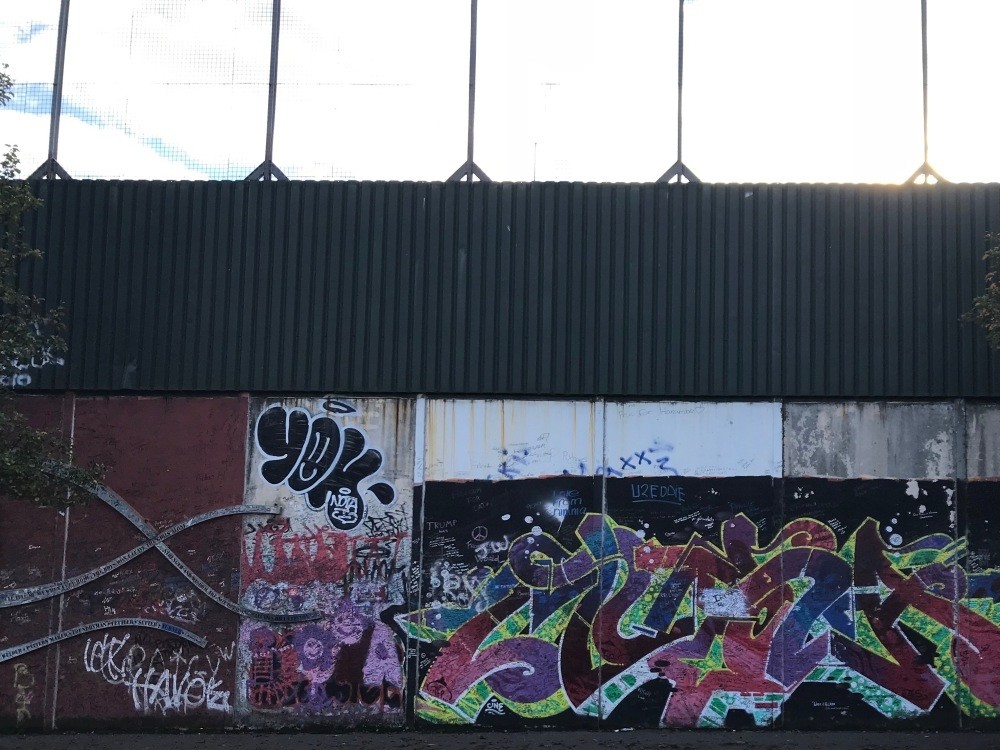 Twenty years after the Good Friday Agreement, there is peace in Northern Ireland. But is this a stable enough peace to survive Brexit with all the issues about borders that it brings?

Last week the Democratic Progress Institute held a conference for journalists in Dublin and Belfast. The purpose was for Turkish journalists to listen to experts and discuss the role that journalists can play in conflict resolution.

The role of the journalist, according to Northern Irish and Colombian journalists and experts we met with, is to report the truth. That is, a journalist should not be involved in the talks and cannot be responsible for driving the agenda; a journalist's task is simply to report what is happening to inform the public.

However, there are times in all peace negotiations when a journalist might be forced to choose between reporting facts or helping the peace negotiations continue. They may have access to information which could possibly derail the talks. What to do in this situation is something each and every journalist should decide for themselves; looking at the specific situation and progress, the journalist may have to withhold facts in order to protect the process. Or they may decide that the facts will come out eventually anyway, and it is better to put them forward for public consumption. 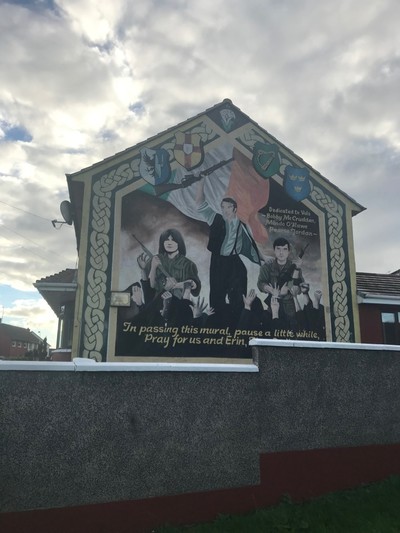 A mural in Belfast, Northern Ireland commemorates dead martyrs of the Republican cause.

The Northern Irish peace process, one brokered between a number of interested parties and two governments, Ireland and the U.K., challenged journalists. Journalists were not included in the talks, but had access to the major players. Some 20 years down the road, there are a number of lessons and learning points that one can take away from the Northern Irish experience. Listening to both sides, Republican supporters and Loyalists, some things became clear.

This year marks the 20th anniversary of the Good Friday Agreement. Driving along the so-called "Peace Walls," standing over seven meters high, the resemblance to other walls that divide, those in Palestine, or the former East German wall, or even that proposed by Donald Trump, is remarkable. The Belfast Peace Walls were also erected to keep the people apart; however, in this case the intention was not to prevent people from escaping, nor to protect one community from another, but rather to protect each community from the other community.

There are 109 peace walls. There are gates in the long walls which are firmly closed every night and opened again in the mornings, allowing people to get to work. In many places, the walls consist of 3 layers of reinforced concrete, then a layer of steel and then wire mesh. We were told that the walls had constantly been made higher and higher to keep out bombs and rockets.

With houses nestled cheek-to-jowl along the walls, the need to protect the local population during the troubles was obvious. However, today, when there is ostensible peace in Belfast, the walls are still there. It is encouraging that many houses nestling under the walls have small café tables and chairs in the garden. This is a clear sign that the fear of incoming missiles has decreased.

But the walls are still there. Not only are they still standing, 44 of the 109 Peace Walls have been erected since the Good Friday Agreement in 1998.

According to our guides from the Republican side, there are no problems among the people. They told us that sectarian differences do not exist; rather the problem is one of invasion by an imperialist force. The British came over, forced their language and customs and government on the Irish people. And the people fought back. Now peace has been restored, and young people from both communities are friends, the future is rosy. One former IRA prisoner, today a member of Sinn Fein, told us that if the long promised referendum on a united Ireland were to be held today, the result would probably be for uniting the island; this rings true. As part of the Good Friday agreement, a referendum for the residents of Northern Ireland on whether they want to be united with Ireland or not was promised. Twenty years on, no such referendum has been held.

There are probably many reasons for this. What was interesting was that we were told that according to Sinn Fein's polls, three years ago many people who voted for Sinn Fein would not have voted for a united Ireland. Today, this has changed. Sinn Fein is convinced that if there were a referendum today the result would be a "yes" for uniting Ireland. What has brought about this change? The answer is simple. It is the answer to most questions concerned with the U.K. today - Brexit. The idea that a border, even if not a hard, physical border, would exist once again between Northern Ireland and Ireland, upsets many people. The idea that Europe would make concessions that would give Northern Ireland a different status to the U.K.,ostensibly drawing a border in the North Sea and cutting off Northern Ireland from mainland Britain, upsets many others.

The problem is that the Northern Ireland problem has never been and still is not black and white. Listening to the Republican supporters, to those who want a united Ireland, everything is over, and it is time to unite Ireland. Everything is positive. We were taken on a tour of murals that proudly commemorate their dead, martyrs to the Republican cause. Walls with young men wielding rifles and cannons and walls that depict men no longer with us because they had been shot by the British or had died in hunger strikes. We were taken to a garden where a plaque states:

"As a direct result of Britain's occupation of our country, these men, women and children were murdered by British Crown Forces and pro-Unionist death-squads who were under the control of the British State."

And a list of names is given. The language is clear and incontestable. "Murdered," "occupation," "death-squads." One's heart goes out to those who had lost their loved ones.

Another such plaque reads:

"This monument is dedicated to the memory of our comrades from the greater Ballymurphy Irish Turf Lodge Areas who gave their lives for Irish freedom. It is also dedicated to the men, women and children from our community who were murdered by the British crown forces and pro-Unionist Death squads."

"The seed which on Cavehill was sown

And they who served, suffered and died,

Their blood, our cause has sanctified

Be proud of them our martyred dead

And in their footsteps let us tread

The story here is an age-old story. Oppression, colonization...

But wait. The British soldiers, the Protestant community, came to Ireland at the time of King Henry VIII that is in the 16th century. Over 500 hundred years ago. They are hardly invaders anymore. They are locals. Living five centuries in one location surely gives one the right to that status.

When you talk to these "newcomers," these "invaders" the story is different.

First of all, one point should be made clear. DUP, the party that most closely represents the concerns of the Loyalist residents of Northern Ireland, won 10 of the 18 seats in Parliament that belong to Northern Ireland constituencies. They won three more seats than Sinn Fein.

The tour guide from the pro-Unionist/Loyalist side of the walls told a very different story. We were shown only one wall with a mural, as compared to the dozens that we saw on the Republican side. As the bus idled in front of this mural of young brave handsome men holding guns, standing in a typical Belfast street, our guide raged. He spat out the words, stating categorically that this mural needed to go. He told us how it belonged to the Ulster Defense Association, a "paramilitary and vigilante" group. Our guide related how as a young man he had extricated himself from this association by joining the British army. He also told us of how he had managed to survive three attempts on his life, all attempts carried out by the IRA. The second attempt, which happened when he opened a booby trapped door, killed two of his colleagues and put him in a coma for three months. As a result he now has steel plates to hold his leg and back together. The third attempt was when he found a car bomb, housed in a child's lunch box, strapped to the bottom of his car.

He was not angry. The only time our Loyalist guide demonstrated real anger was when he talked about the Ulster Defense Association. He displayed little anger against the IRA who had nearly killed him three times. His problem with the Ulster Defense Association was that this mural and their actions, which he labelled as "terrorist actions," merely encouraged young people to use violence to settle their problems.

Despite benches in the front yards under the shade of the wall, despite the paintings on the walls, the graffiti, the mementos of visitors to the walls, the gates are still locked at 10 pm every night. These are walls that protect the people from one another. There is obviously still a desire for this, as the people are not ready for the walls to come down, despite 20 years of peace. The houses across from the gates do not have windows - this is to protect them from bomb attacks. Schools are still strictly segregated, and students on the Republican side go to Roman Catholic schools, while students on the Loyalist side go to Protestant schools. The only integrated schools are a fair distance from the walls, and it is very difficult for parents to send their children so far.

The peace brokered by the Good Friday Agreement is still in place 20 years down the road. However, this is not a positive peace - it is not a peace of love and harmony. This is a peace that consists of a lack of violence, a lack of attacks, a lack of terrorism from both communities.

The situation in Ireland is not simple. It never has been. There is a historical background that stretches back centuries. For twenty years, it has been possible for the interested parties to discuss and debate their differences in the political arena. Even with the threat posed by Brexit, there is no indication that this will change in the near future.

Yet, there are no plans to bring the walls down. No date has been set for a referendum. There is no indication that the differences will suddenly be solved. On the positive side, Sinn Fein and the DUP now enable people to debate and discuss their differences in the political arena. A viable alternative to fighting in the streets and to violence has been produced. But the differences remain, and may never actually go away. Differences that can be discussed and debated are not fatal differences. Although a negative peace is not as desirable as a positive peace, it is preferable to uncontrolled violence.

Like many other countries with a brokered peace, the most positive outlook for Northern Ireland is that its people will be able to continue to develop the ability to discuss and debate the differences in the political arena rather than in the streets with bombs and Molotov cocktails. The idea that the people will wake up one morning and put all their differences to one side to live in harmony is unrealistic. But the idea that the people can discuss their differences in the political arena and learn to live, even if uncomfortably, with their former enemies, is one that can bring a positive future to many regions in the world.