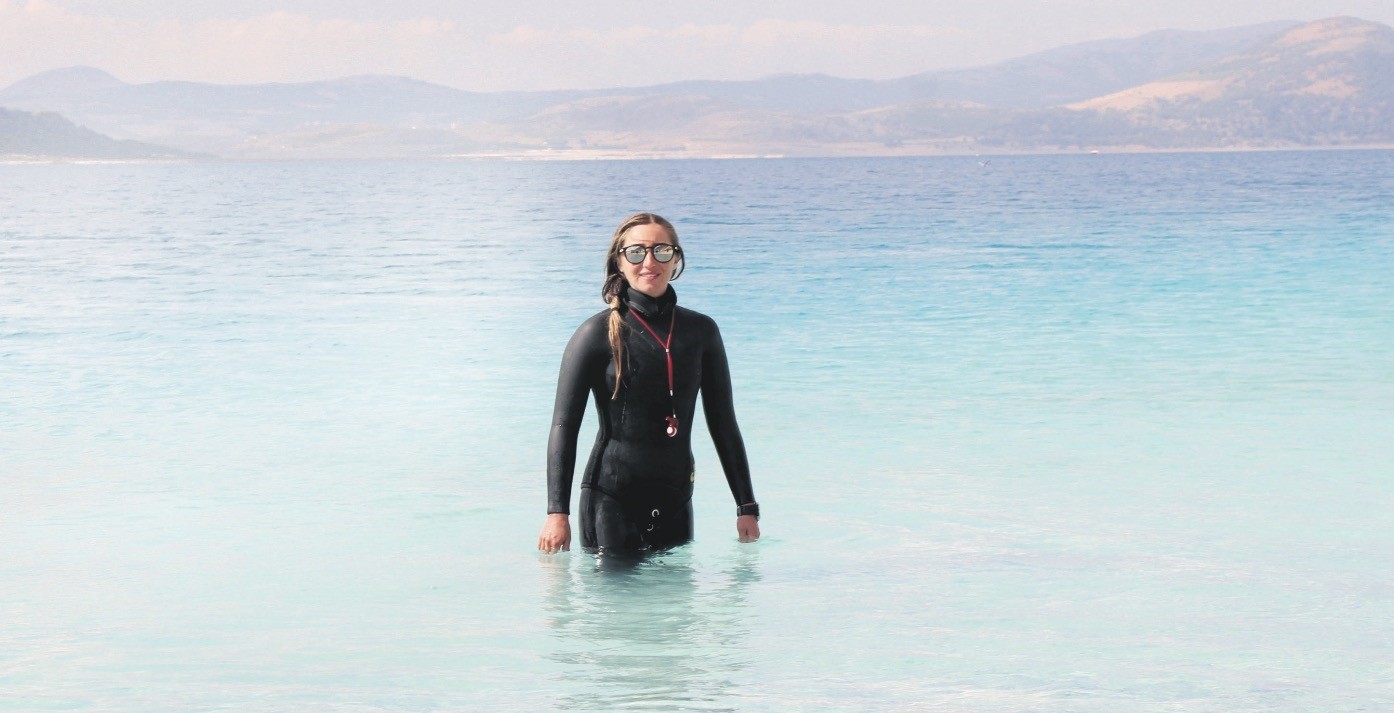 Turkish record-setting freediver Şahika Ercümen has recently set her mind on breaking the women's free-diving world record for freshwater lakes which currently stands at 55 meters. To break the record, she has found the perfect spot: Lake Salda.

At 184 meters, Salda is the deepest lake in Turkey and is likened to the Maldives thanks to its white sand beaches and clear water.

Even though Lake Salda has never been used for diving before, Ercümen picked it to draw attention to its protection with her record-breaking attempt.

Sports: A tool for overcoming obstacles

For the last 20 years, Ercümen, 33, has been diving to break records, but her childhood was not easy due to her severe asthma.

Noting, as a child, she envied those who did sports and swam when she could not, she said: "My life changed after I was introduced to water sports. The most recommended sport for people with asthma is swimming. With this sport, my immune system strengthened, and I immediately had a different life."

She shared that she fell in love with water sports after choosing an underwater sports class during a school trip at the age of 11, hiding it from her family.

She became a national sportswoman two years after she placed in a competition in Balıkesir. "After I started the sport, my family saw the improvement in my lessons and health. Then, they started to support me. We should be insistent on some issues. I told my family I wanted to be a national sportswoman. I told them the sport had led to a scholarship at a university and that I wanted their permission to pursue it. Therefore, I want to tell children and youth that if they have a dream, they should not give up on it and make a real effort to follow it."

Pleased to be the first person to attempt deep diving in Lake Salda, Ercümen said it was critical she remains calm while diving to conserve oxygen.

She highlighted that she is very nervous as no one has attempted deep diving in Lake Salda. "The only thing that scares me is the unknown. I swim with sharks, we encounter them sometimes. I'm not scared of the sharks because we are

not their natural prey. While people kill hundreds of thousands of sharks every year, sharks attack only two people annually. Once I learned that they don't normally prey on people, my fear of them went away. However, there are a lot of unknowns surrounding Lake Salda. No diving has ever been attempted here, and its underwater environment hasn't been thoroughly studied. This is why I plan on being really careful. I wouldn't say that I'm afraid, but the unknowns of the lake make me nervous," she added.

Ercümen said that she works out and exercises 350 days a year and will spends the few days before the record attempt resting. "I have been diving since the first day I arrived at Lake Salda. We have gotten very good results. I cannot announce the actual numbers, but I broke the record during my practice dives," she said.

Explaining that she got an opportunity to dive in Lake Salda for the first time last year, she said: "The water is cool in Lake Salda. It is one of the five cleanest lakes in the world. It is a special place. It has become popular, especially in recent years. As the recognition of this place increases, it should also be protected. Therefore, I decided to try the world record here. We want to draw attention to the protection of the lake. Furthermore, we want to bring a world record to our country dedicated to the 95th anniversary of Republic Day, which we will celebrate in a few days. Now, the world record in men's free diving in a freshwater lake is 75 meters and 55 meters for women. No one has been able to break these records. Mine will be the most recent attempt at breaking the world record."

Explaining that no one has really explored the depths of Lake Salda, Ercümen said: "I hope I will be the first one who goes down to those depths and is able to break the world record. We are well prepared. I trust myself. I think I will be able to pass 55 meters and add 10 meters more to it. I expect my dive to last nearly 2 minutes, 15 seconds."

She also said that diving in lakes is twice as hard because the buoyancy of fresh water is less than salt water and most lakes are colder than seas.

She likes to be the first to break records and to discover new things. "While no diving has been performed in the freshwater lake, I wanted to pioneer this. I am sure the number of dives in many lakes around the world will increase after this record. My aim is to develop myself in records, but my priority is to leave a mark with our work and to touch other's lives."