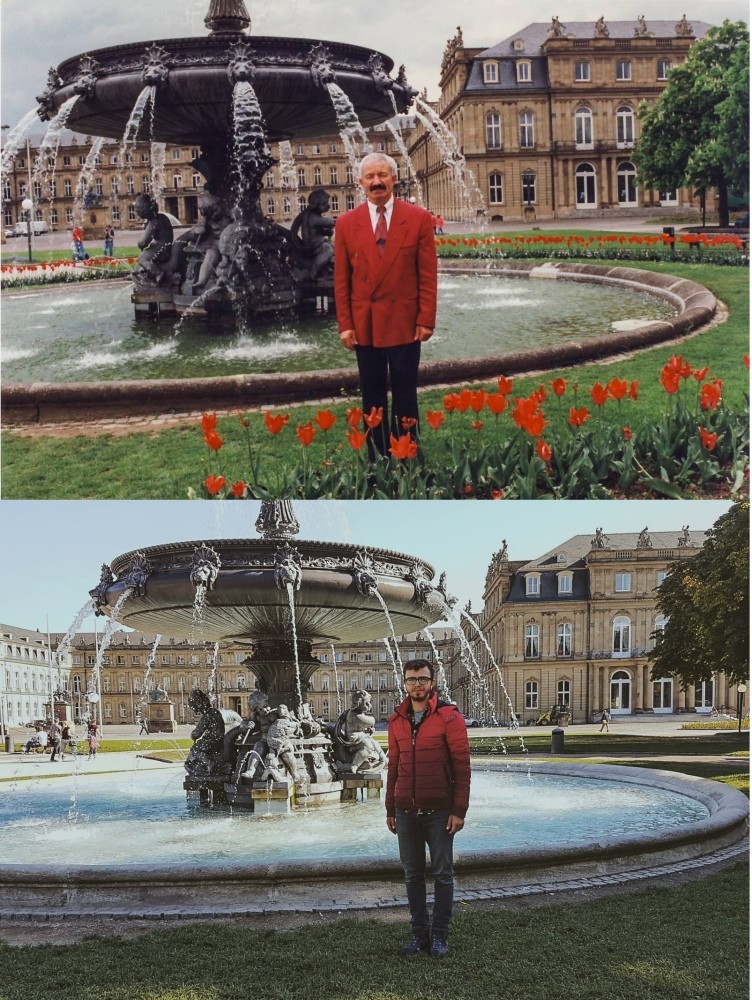 In 1961, Turkey and Germany signed a recruitment agreement, which allowed Turkish citizens to work in Germany as guest workers. Starting that year, tens of thousands of Turks migrated to Germany in hopes of a new life, a better life for their children and even families back in Turkey. Today, Germany has a 3 million-strong Turkish community, many of whom are second and third generation German-born citizens of Turkish descent whose grandparents moved to the country in the 1960s.

Dursun Ali Yıldırım, a Turkish worker, is just one of the workers who moved to Stuttgart in the '60s. His adventures in the city he had never been to before saw the light of day when his 24-year-old grandson, Zaferullah Yıldırım, discovered his grandfather's photographs on a USB drive. And after this discovery, the young Yıldırım set out for an adventure: To take the same pictures that his grandfather was once took.

Living in Istanbul, Zaferullah Yıldırım has graduated from law school this summer but besides seeking justice, his other desire is to see the world; hence he calls himself "part time student, full time traveler."

Three years ago, Yıldırım decided to see the world and traveled to Palestine by hitchhiking. After that he knew that travelling around the world was his calling. Since 2015, he has been to more than 300 cities in 45 countries.

However, his recent trip to Stuttgart has been the most special of his travels as he reanimated the memories of his grandfather.

Following the steps of his grandfather

Yıldırım found a series of photographs in his uncle's USB showing his grandfather, Dursun Ali Yıldırım, visiting the landmarks of Stuttgart, Germany, where he migrated to work.

After discovering the photos, Zaferullah Yıldırım had the idea to recreate his grandfather's photos that were taken almost 30 years ago and set off on the journey of his life with a group of friends. 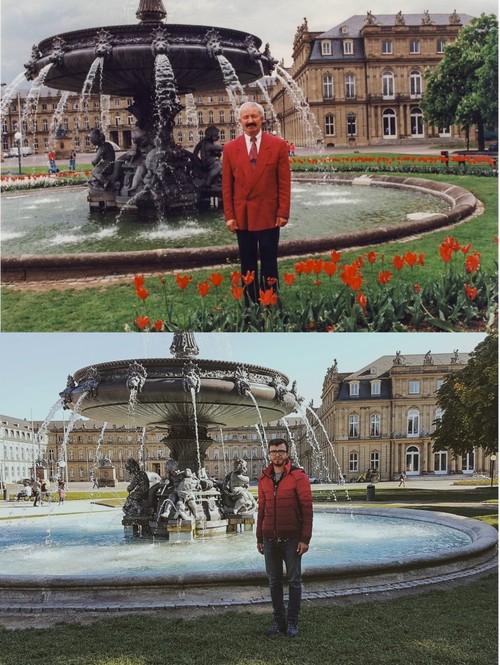 Dursun Ali Y›ld›r›m (above), who died almost 20 years ago, went to Germany decades ago to work at an automobile factory in Stuttgart.

The group began to hitchhike starting from Istanbul. After visiting eight countries - Bulgaria, Macedonia, Bosnia-Herzegovina, Serbia, Croatia, Slovenia, Austria and Kosovo - on the way, they finally arrived at Stuttgart and took out the camera to get the iconic shots grandpa Yıldırım had taken three decades ago.

"I just ran into my grandfather's photos by accident. I shared the photos with the 'Interrail Turkey' group on Facebook and asked them if anyone know where the photos were taken. They told me that they are the photos of Stuttgart's landmarks. Thus, my next destination was set," said Yıldırım talking about how he decided to start this emotional journey.

The journey to Stuttgart was emotional for young Yıldırım as grandpa Yıldırım passed away 18 years ago. Yıldırım said the photos are more than 30 years old.

"My grandfather migrated to Germany in the 60s and started to work at an automobile factory. Until I started to take the photos, I did not know how emotional I would get. It is exciting to visit the same places as my grandfather did once. I believe my grandfather would have been proud to see me following his footsteps," Yıldırım said.

Among his grandfather's photos, there are others that were taken in different European cities but the young Yıldırım has not been able to visit them yet. He will surely set his next destinations to these places.

Traveling the world on budget

Although Yıldırım made the headlines with his visit to Stuttgart, he is a hopeless traveler. He wants to see the world but on a budget which helps him to act impulsive and see whatever place he wants without even making plans.

He said he makes music on the streets during his travels to have fun and earn a couple of bucks to cover his expenses on the road. Although he visited most European countries, Yıldırım wants to travel to Kazakhstan, Sri Lanka and India.

Although Yıldırım often travels with his friends, he said he will continue his trip to Europe alone. "I do not travel according to a plan," Yıldırım said. "I want to travel to Scandinavia to see the northern lights but it is so cold that it makes me think twice before heading there."

Yıldırım said traveling alone is not something to be afraid of, adding, "All one needs is faith in themselves. If you overcome your fears, you can follow your dreams wherever they lead to."