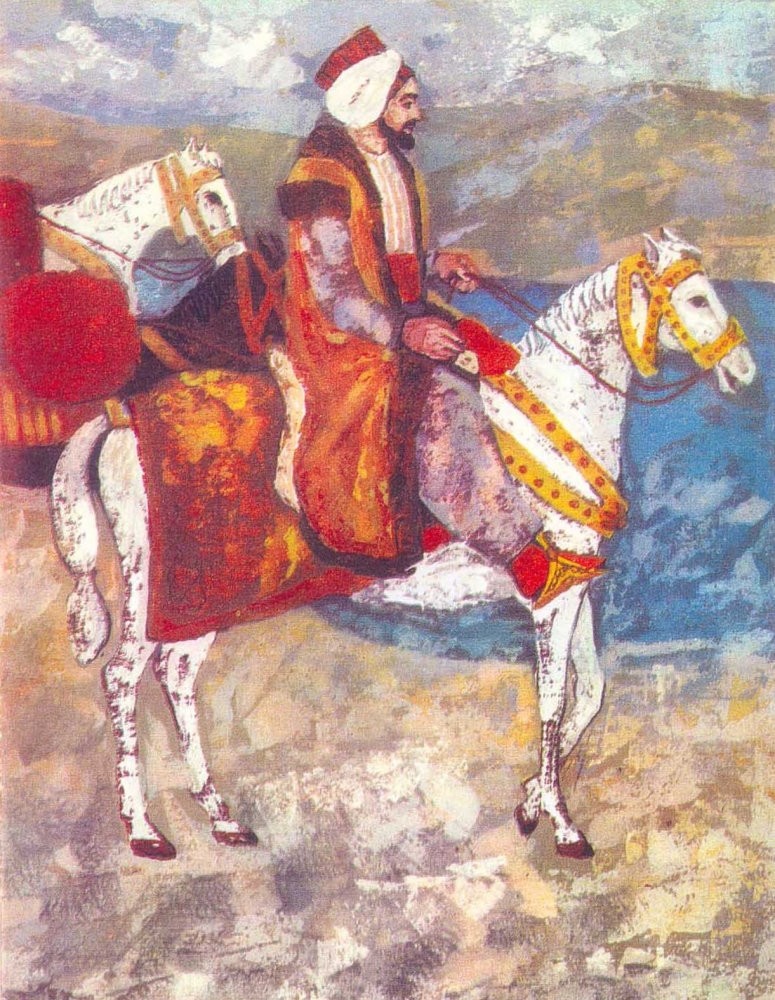 Evliya Çelebi, one of the greatest travel writers in history, journeyed across the entire Ottoman Empire and its neighboring countries; unfortunately, he was never as appreciated internationally as he should have been

Even if most people know the 17th-century Turkish writer and wanderer Evliya Çelebi, there are few who appreciate the real value of his "Seyahatname" ("Books of Travels") which is the one of greatest and most important travel books written in the history of literature.

The book is a masterpiece of Turkish prose. One can learn the history, culture, folk and architecture of a geography of 45 states from this unique work. Even the travel books of Italian Marco Polo and Moroccan Ibn Battuta, who are the most famous travelers in the world, are not as important as Evliya Çelebi's work.

Çelebi's life changes with a dream

Evliya Çelebi was born in Unkapanı, Istanbul in 1611. His father Derviş Mehmed Zilli was a jeweler of the Ottoman palace. Evliya, the Arabic word used to indicate Islamic saints, is the title which was probably given to him to refer to his mastery. With a nice story, Evliya Çelebi describes how he came to start traveling around the world. According to this story, he used to go to the Ahi Çelebi Mosque, which was close to his family house, from time to time. One night when he was at his home, he dreamt he was at the mosque, meeting the Prophet Muhammad, which is interpreted as a good omen.

He narrated this dream: "I lay down on the pillow of lamentation, in the corner of my hovel, in my birthplace Istanbul, to a sleep of wish fulfillment. It was the night of Ashura in the month of Muharram, the year 1040 (Aug. 10, 1630), in a state twixt sleep and wake, that I had a dream. This humble one saw myself in the Ahi Çelebi mosque, near the Yemiş landing - a mosque built with money lawfully acquired, an ancient mosque where prayers are accepted by God. There were soldiers bearing arms. The door was opened and the light-filled mosque was crowded with a luminous congregation, who were busy performing the dawn prayer. It seems that I stood motionless at the foot of the pulpit and gazed in astonishment at this congregation with their beaming faces.

"'Good sir,' said I, turning to the person beside me, 'please tell me who you are, and what your noble name is?' 'I am one of the 10 Promised Paradise, the patron saint of archers, Sa'd ibn Abi Waqqas," he replied. I kissed his hand and said, 'And who, good sir, are the lovely congregation immersed in light on this right side?'"

"'They are the spirits of the prophets. In the row behind them are the spirits of the saints and the pure ones. And these are the spirits of the Companions of the Prophet, the Emigrants (from Mecca), the Helpers (in Medina), the People of the Bench (Arbab-ı Suffa - a group of pietists during the lifetime of the Prophet), the martyrs of Karbala, and the friends. Those to the right of the prayer niche are Abu Bakr and Umar; those to the left, Uthman and Ali. The man in front of the prayer-niche wearing a cap is Uways al-Qarani, the Prophet's brother in this world and the next. The dark-skinned man at the left wall of the mosque is Bilal the Ethiopian, your patron saint and the caller to prayer of the Prophet. The short-statured man who groups the congregation into rows is Amr Ayyar al-Zamiri. These soldiers marching with the standard, whose garments are dyed red with blood, are Hamza and all the spirits of the martyrs.' Thus he pointed out to me the entire congregation, one by one."

"… To sum up the dream: I completed my duties according to Sa'd ibn Abi Waqqas's instructions. The Prophet recited Ya Sin (Sura 36) in the uzzal musical mode with a doleful voice, al-Nasr (Sura 110) three times, and the Mu'avvizeteyn. Bilal recited a Fatiha. As the Prophet rose to his feet in the prayer niche, Sa'd ibn Abi Waqqas at once lay hold of my hand and brought me before him, saying, 'Your loving and faithful servant, Evliya, begs your intercession.' He told me to kiss his blessed hand. As I shamelessly put my lips on that blessed hand, out of awe and dread, instead of saying 'Intercession (şefa'at), O messenger of God!' I said, 'Travel (seyehat), O prophet of God!' And since the pronunciation of 'şefa'at' and 'seyehat' are similar, I said something that I had not intended. The Prophet smiled and replied, 'My intercession and my travel and my pilgrimage, may God give you health and well-being.' He recited Fatiha, and all the noble Companions recited it after him."

"I kissed the hands of everyone present in the assembly and received each one's blessing."

From Egypt to Vienna, Çelebi wandered 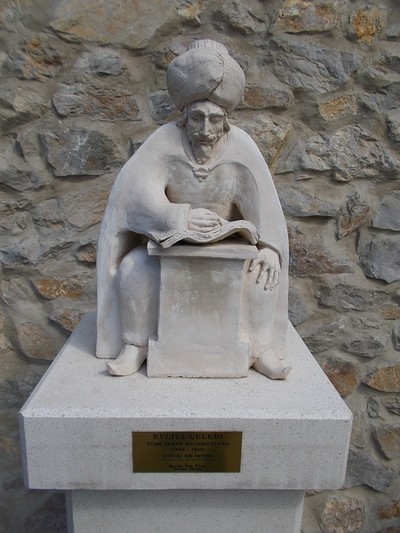 Statue of Evliya Çelebi close to the Ottoman Eger Castle in a small memorial park in Hungary.

When he woke up, Evliya Çelebi had his dream interpreted. When he heard from the interpreter of dreams, İbrahim Efendi, that he will be a globe trotter and world traveler; traveling was destined to him, he started his travels. After traveling around Istanbul, he made his first travels outside Istanbul to Bursa in 1640. Then, he traveled across the lands of the Ottoman Empire day and night in company with various statesmen and wrote what he saw.

Evliya Çelebi, who describes himself as a world traveler, wandered every inch of the 17th-century Ottoman geography without missing a single village, town, city, mountain, slope, plateau and plain. He visited Anatolia, Crimea, Caucasus, Dagestan, Azerbaijan, Iraq, Syria, Palestine, Arabia, Egypt, Greece, Albania, Bosnia-Herzegovina, Macedonia, Bulgaria, Hungary, Romania and Moldova. When he found an opportunity, he went to see the Russian countries as well as Iran, Czechoslovakia, Slovakia, Slovenia, Poland, Germany, Austria, Denmark and some parts of Italy, all neighbors of the Ottoman Empire.

He was conversational and witty. Therefore, statesmen were always around him. Devoting himself to travel without feeling an ambition for prosperity even if he had many acquaintances among the statesmen, he accepted every kind of duty in order to travel. He says with his own words that he traveled seven seasons and 18 sultanates in 51 years. In order to leave a mark at the places he visited and to make a joke, he wrote "Evliya ruhiyçün el- Fatiha," meaning to recite the Fatiha prayer for the soul of Evliya, on many places. He was alive in 1684. However, we do not exactly know when and where he died.

Great masterpiece: 'The Book of Travels'

Evliya Çelebi's 10-volume travel book, which is a memoir, is an indispensable source for the nations living under Ottoman dominance and their neighbors, as much as it is for Turkish culture. He mentions many places from Egypt to Vienna in the book. He wrote everything about the places that he visited, including history of cities, castles, neighborhoods, houses, mosques, sanctuaries, schools, dervish lodges, fountains, caravanserais, inns, epitaphs of works, shops, bazaars, poets, insane ones, clothes, local languages, seasons, water, exemplary structures, bathhouses, churches, foods, drinks, soup-kitchens, vineyards, gardens, mountains, prairies, plains and rivers. Therefore, "The Book of Travels" is a consultant work to which every science field should apply. In 1841, it was decided that an issue of the "History of Evliya Çelebi," comprising of some selections, was to be published

This issue was known as "Müntehabat-ı Evliya Çelebi," meaning "Anthology of Evliya Çelebi" later. It included some selections about Istanbul from the first volume, a wizardry story and a fortune fountain story. When the first issue was published, it was snapped up. Since 1896, whole volumes of the book started to be published with the efforts of Necip Asım Bey and Ahmed Cevdet Bey. The compilation was completed in 1938. However, in this published version, the language of Evliya Çelebi was changed; many expressions were incorrectly read; some parts were censored.

"The Book of Travels" from this source had many reading errors and deficiencies for years. A new version of the book was prepared with the effort of Yücel Dağlı and Seyit Ali Kahraman in 1996. The last volume of it was published at the end of 2007. Later, a simplified edition was published. Lastly, a selected work which features examples from the 10-volume book in every issue was published by Seyit Ali Kahraman among that by the Yeditepe Publishing House.