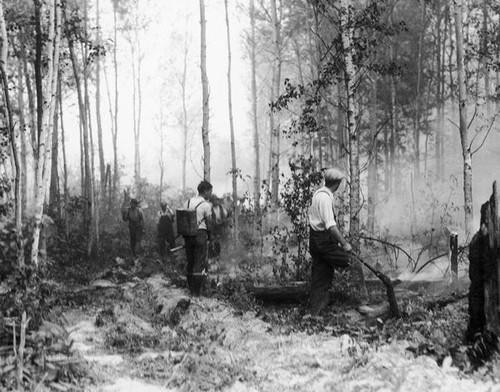 American firefighters try to put out a forest fire out on the mountains.
by Erhan Afyoncu Nov 28, 2018 12:00 am

Although the U.S. and Ottoman Empire were separated by geographical distance, the two had established diplomatic relations by the late 18th century. The relationship was at its peak when the two countries helped each other during major natural disasters

In 1889, a flood occurred in Johnstown, a settlement in southwest Pennsylvania in the U.S. After heavy rains, a dam collapsed and the city was submerged. More than 1,600 homes were destroyed and more than 5,000 people died. A fire started after the flood which also increased the impact of the disaster. This event was known as the first major disaster the American Red Cross faced. 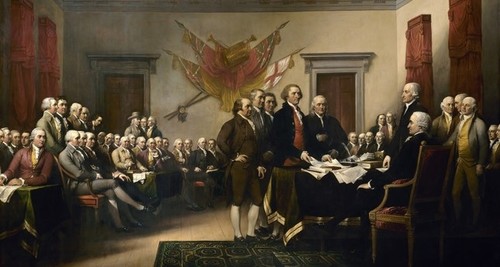 With the Treaty of Paris, signed on Sept. 3, 1783, Great Britain approved the independence of America.

Then, a major earthquake occurred in Istanbul in 1894. Many countries sent aid to help with this disaster. France gave the highest amount of aid with $34,900; the second highest was the U.S. with $9,600.

The U.S. was struggling against forest fires while collecting aid for the earthquake in Istanbul. The summer of 1894 was quite dry in the U.S. In July 1894, large forest fires around the Pierce and Phillips settlements in the state of Wisconsin started. Some 100,000-decares of forest land and 400 houses were burned. Twenty people died. The town of Phillips, where 2,500 people lived, was completely razed in the fire. The town was later rebuilt and a monument in the memory of the disaster was erected along the Duroy Lake.

In September, a large forest fire broke out in the state of Minnesota. About 200,000 decares of Pine County forests burned along with the towns of Mission Creek, Brook Park, Sandstone, Miller, Partridge, Poke Gama and Hinckley. More than 400 people died. The Ottoman ambassador to Washington sent a telegraph to Istanbul and reported that it would be taken kindly by the American public if the Ottoman Empire sent a benefit of 100 liras to the American fire victims. Meanwhile, aid campaigns in the U.S. were continuing to collect money for the earthquake in the Ottoman Empire. This proposal of our ambassador to Washington was presented to Sultan Abdülhamid II. The sultan kindly accepted the offer and raised the amount of the aid to 300 liras. The aid was delivered to the American fire victims via our ambassador. This Ottoman aid was written about in the American newspaper with the title of "Turkish sultan sends 300 liras to Minnesota and Wisconsin."

After the discovery of America in 1492, the Spanish and the Portuguese colonized South and Central America. The Spanish also dominated the territories of Mexico and the regions where some states of the U.S. are located today. They kept the English away from America for a long time.

However, during the time of Queen Elizabeth in the late 16th century, the English began to colonize America. When they defeated the Spanish Navy in 1588, a path opened for them in America. In England, groups that lost the power struggle went to the continent of America, the New World, and tried their luck. As England gained power, they also dominated the French and Spanish colonies in America. The colonies in America were governed autonomously as long as they paid their taxes and obeyed the king.

In the second half of the 18th century, taxes that the English levied successively and their pedantic perspective led to solidarity between the colonies. The colonies declared America's independence on July 4, 1776. However, England did not accept this situation. The Americans defeated the English in Yorktown in 1781 and put an end to this, winning a certain victory. With the Treaty of Paris, signed on Sept. 3, 1783, the U.K. approved the independence of America. Relations between the Ottoman Empire and America began shortly after American independence. America started to trade with its own flag in the Mediterranean, paying tax to Algeria, which was an Ottoman state in North Africa at the time.

The American administration tried to sign a treaty with the Ottoman Empire but the Ottoman sultans abstained from such a treaty because they saw it as detrimental to the country. When the Ottoman navy was burned by the U.K., Russia and France in 1827, the Ottoman administration signed a trade and navigation treaty with America in 1830 to bring different alternatives to its foreign policy. However, the Americans did not fulfill their promises for the construction of a battleship and thus the Turks experienced their first disappointment at the beginning of their relationship.

The Ottoman-American relationship, which had been going well for a while, was tense during the period of Abdülhamid II because of American missionary activities and U.S. intervention in the Armenian issue. However, the natural disasters experienced by the two countries were a cause for solidarity between the peoples. When America entered World War I in 1917, the two countries became enemies in the world war.