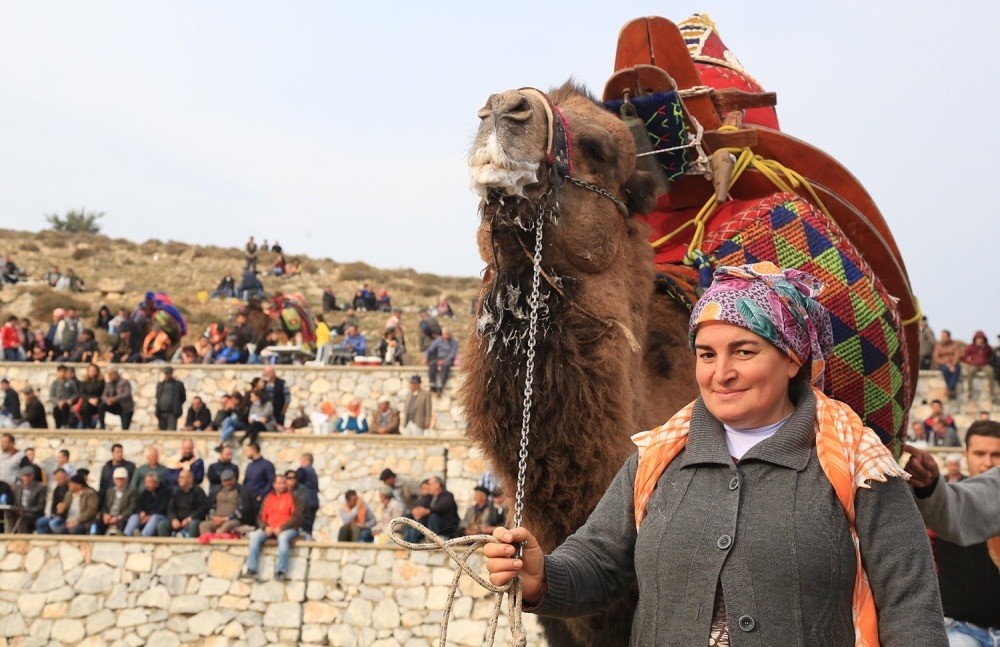 Camel wrestling is an ancient nomadic tradition observed by Turkic tribes for centuries. Today the tradition is continued by nomad women in Milas who dress the camels in beautiful garments

Breeding camels and following the wrestling matches of the season, the women of Milas are proud to preserve the nomadic tradition of camel wrestling.

Foreign tourists, as well as locals show great interest in traditional camel wrestling, which is an important part of the nomadic culture in the Aegean region.

Local people look forward to this exciting event where more than 100 camels wrestle every year. The tradition of camel breeding has been preserved by women for many years in Muğla's many neighborhoods.

Camel fighting originated among ancient Turkic tribes over 2,400 years ago. Camels also wrestle in the wild, so the practice occurred before it was first organized by nomads. People interested in camel wrestling or camel owners say that the nomads used to have their camels wrestle as part of competitions between caravan owners. Today, camel wrestling is popular mostly in Aydın. It is also seen in the cities of İzmir, Manisa, Muğla and Denizli in the Aegean region, Balıkesir and Çanakkale in the Marmara region and Burdur, and Isparta and Antalya in the Mediterranean region.

These camels are bred with a great deal of care and are trained for wrestling. The contests are held in the winter months of December, January, February and March. Every wrestling camel must have a name. Sometimes the camel's owner gives it a name, and sometimes the spectators find a name for the camel inspired by how it behaves during wrestling matches. Some camels are named after popular characters from TV shows. The name of the competing camel is written on a piece of embroidered cloth called a "peş" hung behind the saddle, which is called the "havut." Beneath the camel's name is written the word "Maşallah" (May God protect him).

Today, the most entertaining camel wrestling matches are taking place in Milas under the leadership of nomad women who continue the centuries-old tradition.

In Milas, the Governor's Office supervises the camel wrestling events to be organized for folkloric purposes without harming the wrestling animals.

Milas Deputy Mayor Zeynep Çınar defined Milas as a district that preserves the nomadic culture, saying they organize camel wrestling festivals in the winter months in many districts in order to keep the culture alive.

Noting that women who set their hearts on camel wrestling go down to the arena for training and preparation in the summer, Çınar said as a female administrator, it is a very nice feeling to see women with their camels in their head scarfs and boots.

Çınar stressed that women can also accompany their camels in their fights just like the men do and congratulated them wholeheartedly.

Women prepare for the match 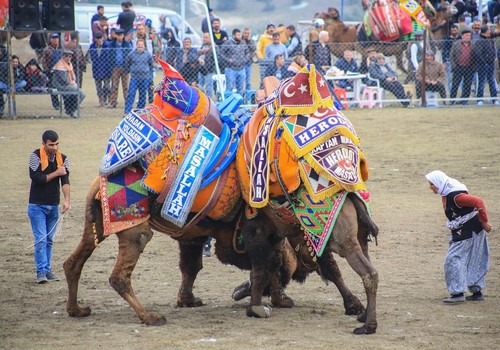 Camel wrestling a tradition since the days of nomadic Turkic tribes, takes place from November to February.

Camels can wrestle from the age of 6 to 25. In line with the previous championships of the camels, the owners are given participation money ranging from TL 1,000 to TL 20,000 ($190 to $3,800). The owner of the champion is also presented with a cup afterwards.

The women of Milas who participate in wrestling matches with their camels create colorful images in the arena.

Calming their camels down with kisses while waiting for their turn, the women are often applauded by the enthusiastic crowd in the arena.

Breeding four camels on a farm in Milas, Zeynep Odabaşı said that they prepare their animals for the matches by training each morning during the summer, adding the camels become ready for wrestling when the weather gets cold. "Camel breeding is a tradition that has been passed down to us from our ancestors. I am proud to preserve this culture. I love animals," she said.

Sayinur Aşıcı, 45, said she has been looking after camels for three years, and that she checks on her camel and feeds it first thing in the morning.

"I always look after our camel with care. I feed it with barley pulp and grass and comb its hair. When the wrestling season comes, we go down to the arena together," Aşıcı said.