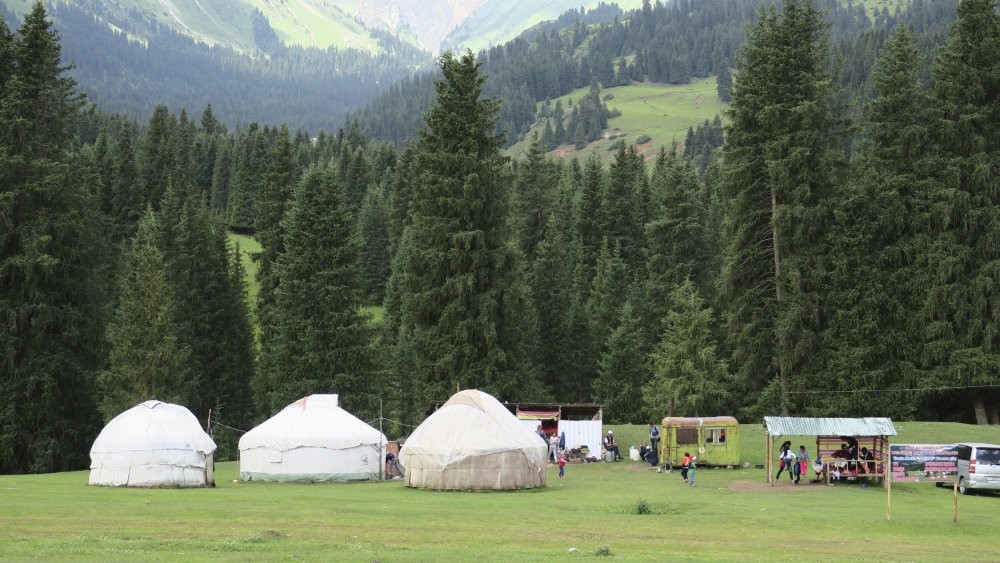 The women of Kyrgyzstan, who were denied lands when their country was reshaped after the collapse of the Soviet Union, are now backed by lawyers that have hit the road to seek justice for them

In a cold, sparsely lit Soviet-era room, sitting close to the heater, Ainura Ibraimjanova taps at her computer. In this rural district in southern Kyrgyzstan, she is the only lawyer providing free legal aid. Just back from court in the Alai district, Ibraimjanova is attending to a stream of clients in thick coats and clutching documents. They are in need of help with alimony, divorce or family land disputes.

"The laws have changed considerably since Kyrgyzstan gained its independence, because there was a real gap in legal frameworks and customs - with many people breaching laws in favor of customs," she told the Thomson Reuters Foundation.

Land, a scarce and highly-prized resource in this former communist country, is of huge social value, she said, with disputes over it particularly affecting women.

"Having or not having a piece of land decides who you are ... It's a very important matter, especially in a rural area," said Ibraimjanova.

At independence in 1991, when state property was privatised, every citizen was given an equal plot of land, but it was often registered under the name of the male household head. That meant women often missed out on claiming land rights, especially if they got married or divorced, Ibraimjanova said.

"According to Kyrgyz tradition, people treat men and women in different ways. If a girl grows up and chooses to take her share of land with her and separate from her big family, this really looks strange in accordance with local tradition and the family is usually opposed to it," she said. Although courts often rule in favor of women and in accordance with the law, executing such judgments can be arduous and take years, Ibraimjanova said. "There are still many women who need to be supported and whose rights needs to be better protected."

Yet change is coming, even to remote regions like Alai - in part thanks to the "Bus of Solidarity". The small van bounds along rural roads to bring lawyers, notaries and social workers to remote parts of the country to resolve villagers' legal quandaries - for free. It is supported by the justice ministry and the U.N. Development Programme (UNDP). On this day, it is headed for the craggy village of Kara-Kulja in southern Kyrgyzstan.

Among those waiting in the rain for the bus to arrive was Zoora Jumabaeva.

"I learned by chance that the bus was coming today," Jumabaeva, a first-time user, told the Thomson Reuters Foundation. She hoped the lawyers could resolve her complaint with the local bazaar after the new owner raised rents and forcibly removed her stall, which sells medicine for livestock, to a location outside the market.

Had the bus not come, Jumabaeva would have had to make an arduous two-hour journey on poor roads to the nearest town, Osh, to seek legal services. In previous years, she would use informal mechanisms such as a council of elders to solve her disputes. But, she said, the fact that their decisions were not legally binding was frustrating. And so, bearing the rain and cold, Jumabaeva huddled at a small desk inside a billowing blue tent to explain her dilemma.

"I'm losing my regular income and my family is suffering. I came here today to get some more legal advice on protecting my interests," she told a lawyer. "There are many other women and young families (at the market) who suffer more than me (from being evicted), as this was their only income source, so I'm trying to act on their behalf to solve a common problem."

The lawyer, Jazgul Kolmatova, who practices in Osh, is no stranger to the Bus of Solidarity having made several journeys. Jumabaeva's paperwork, she said, was scant.

"She came to us with quite a difficult and complex problem, but her case is a fairly common one," Kolmatova told the Thomson Reuters Foundation as she took down notes.

Boarding the bus provides a chance to resolve knotty legal issues that have often been building for years, she said. "I joined the bus of solidarity because I know that the rural population - and especially women - are very poorly educated in legal issues, and I want to make my contribution to changing this situation," she said.

Since the bus began running in 2016 it has visited about 193 villages and carried out more than 7,000 consultations, according to UNDP. But meetings are often brief, and complex cases require follow-up. With a luminous orange hijab wrapped around her hair and fighting back tears, Gulzina Ashimzhanova, 37, said she met Ibraimjanova when the Bus of Solidarity came to her village earlier this year. Ashimzhanova and her five children were made homeless when she left her alcoholic husband, who she said was violent. Ashimzhanova wanted to divorce him and secure her share of the property.

"When we went to the village we saw the bus and met Ainura (Ibraimjanova). She told us about this free legal assistance, she explained everything," she said. "We were consulted from there, then she said to bring the documents and she could help me. She said we could divide the house and get alimony via the court."

Ashimzhanova, who has been clinically depressed, tried to get her share of a house, 5,500 square meters of land and an apple orchard - all registered in her husband's name. "I need to get a house for my children," Ashimzhanova said. "I don't want my rights to be violated."

For Ibraimjanova, the case - though legally clear-cut - carries a heavy social stigma, because Ashimzhanova left her husband and wants an equal share of their common property.

"Gulzina (Ashimzhanova) from my point of view is very brave to act like this, and I'm sure her example can inspire many others," Ibraimjanova said. "I told her if she does fight for her rights that could set a good example for other women in Kyrgyzstan too - there could be many others who are also shy, and this step of hers could give them a push."