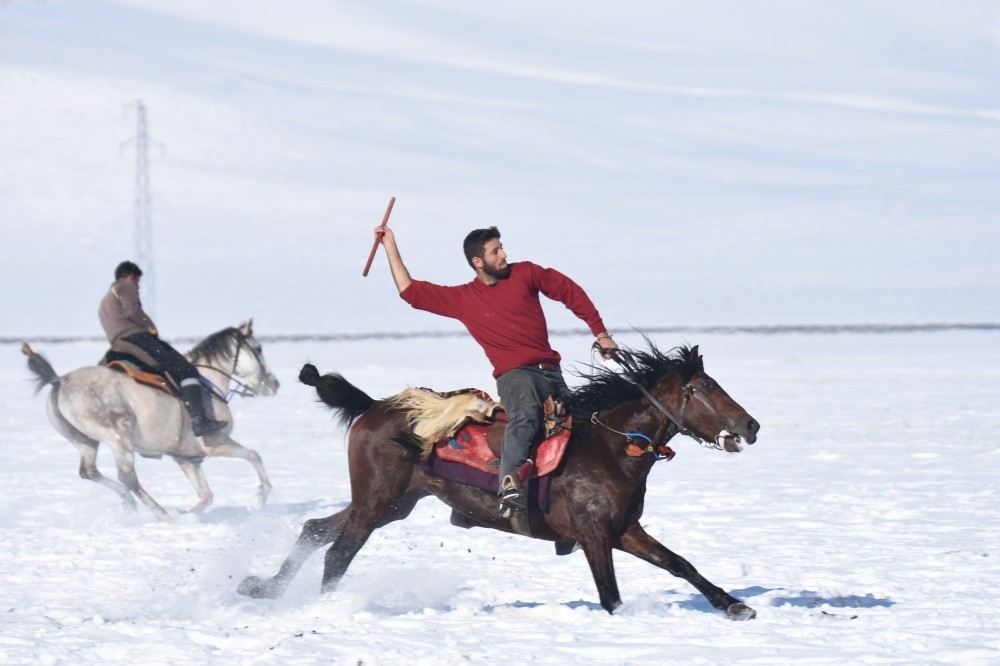 Kars locals play cirit, an ancient Turkish game that has been around for centuries.
by Anadolu Agency Dec 20, 2018 12:00 am

Cirit, the ancient Turkish sport of mounted javelin throwing, is still a popular sport in eastern Anatolian city of Kars where both men and women hop on horsebacks and recreate the sport once played by the Turks in Central Asia

The game of mounted javelin throwing, or "cirit," has been played for centuries in Central Asia and Anatolia. Dubbed the "horseback combat game," mounted javelin throwing is the only type of sport where the opponent can be "shown mercy." The game has become almost a passion for the local village folk in Kars after snowfall in the region.

This game of javelin throwing played on horseback, which has been kept alive in Anatolia for centuries, has become a fun pastime after the recent snowfall for the local village residents in Kars,and is keeping their ancestral sport alive.

After taking their horses out of their stables early in the morning and making the necessary preparations, people of all ages meet in a predetermined village and bring their horses to a field covered by snow.

The villagers, who play javelin throwing in an atmosphere of sportsmanship despite the game's nature as an equestrian combat sport, blow off steam and have fun while passing on their ancestral sport to future generations.

In the first stage of the game, which is played in two stages, young fans of cirit walk the horses within the field for a while to let them rest. The game offers picturesque displays for its viewers and at the end the winners congratulate the defeated team.

This game of javelin throwing played over snow has received widespread interest, with tourists from both Turkey and abroad coming to these villages to watch the jovial competitions.

In the village of Kekeç in the Selim district of Kars, fans of cirit met early one morning despite the minus 10 degree Celsius weather to play the game over a snow-covered field.

Mounted javelin-throwing players, who had gathered in the field from the villages of Kekeç, Akçakale, Laloğlu, Başköy and Hasbey, offered their spectators an incredible experience by displaying all subtleties and beauty of the game for almost two hours.

Şimşek Yıldırım, president of the Akçakale Equestrian Sports Club, said that with snowfall they have officially started the season and are playing the 3rd Mounted Javelin Games.

Explaining that the games are conducted in an atmosphere of friendliness and sportsmanship, Yıldırım said, "With snowfall we have begun playing mounted javelin throwing; when played over snow it becomes even more beautiful. Here we are keeping our ancestral sport alive. Today we're in the village of Kekeç with players from six or seven villages, and we've played our game in a friendly manner."

Saying that before snowfall they walk the horses to get them in condition for the games, Yıldırım stated, "We begin walking the horses around November, take good care of them, groom them and prepare the necessary equipment. After we get them in condition, we begin playing mounted javelin in certain villages. Showing mercy to your opponent does not exist in any other kind of sport, but it exists in mounted javelin. Showing mercy to your opponent after catching them is the highest value in the game."

"The Eastern Express has greatly contributed to this. Tourists are coming from all across the country and abroad. We have spectators coming in via tours and we organize exhibition games in the villages. This is a source of both motivational and monetary support. About 4-5 years ago very few people came via the Eastern Express but now we receive a lot of tourists. We hope that the popularity of the Eastern Express continues. Our visitors from the West are very surprised by the game and we've even received people who had never seen snow before. We invite everyone to Kars to witness one of our games," he said.

Selçuk Başkaya, president of the Kars Caucasus Equestrian Sports Club, said that tourists from Turkey and abroad have shown a real interest in the game, especially in the last two years. "We have been organizing tours for both national and foreign tourists coming to Kars via the Eastern Express for the last two years. So, we want to bring the game of mounted javelin to an even better state and we're getting good results. We take good care of our horses. We wake up at 5 a.m. in the morning to groom them, water them and feed them. Around 9-10 a.m. we gather in the field to play. Mounted javelin throwing over snow is even more beautiful; it's a bit harder but we're used to it so it's no trouble for us." İzzet Gedik, reminding readers that they take great care of the horses used in mounted javelin games, said, "We feed our horses barley, groom them and after that bring them to the field for a game. We want to keep our ancestral sport alive and bring it to an even better state. We teach this sport to our children. Tourists show a lot of interest, we'd like to see more support."

Emphasizing that mounted javelin competitions are very exciting and fun, amateur photographer Birkan Çelik said, "Mounted javelin throwing is a tradition, and one of its most beautiful aspects is that when you capture an opponent and forgive them you get four points. It's incredibly beautiful that the combat game of the past has turned into a game of peace. And it's great fun that this tradition is being kept alive as a game. The excitement of the horses and people is great to watch. The competitions hold among themselves here feel natural, friendly and are thus incredibly beautiful. I hope this tradition lives on so that future generations too can experience it."