Turkeyu2019s one and only circus which is managed by the Cankurt Family, does not use animals in their shows.
by Anadolu Agency Dec 25, 2018 12:00 am

Circuses changed since their first launch in the 18th century but a couple from Turkey continues to keep the circus spirit alive, living the life of nomads in caravans and traveling from one place to another. One thing that has never change is the lights, fires and people challenging the limits of their bodies

With all the glitter, burning fires and people hanging from ropes, circuses always manage to intrigue people of all ages. When the first circuses were opened in the late 18th century in London and then Paris, audiences were excited to see the animals and people who pushed the limits of gravity as well as their bodies. However, circuses had seen their heyday by the time the following century rolled around and began to close one by one. Today, there are only a handful of circus companies left in the world.

There is only one circus based in Turkey that continues the tradition of the original circus managers, living in their caravans, traveling across the country and putting on shows for people of all ages.

Ulaş and Melike Cankurt decided to bring up their children among magicians, jugglers and acrobats in their caravans that they park next to the circus tent. Unlike the original circuses, the couple does not use animals in their shows and both are strong animals' rights activists.

The idea of founding a circus came from Ulaş Cankurt, who worked as a light technician for an international circus group back in the day. After the circus company disbanded, there was only one thing left in Cankurt's mind: To start his own circus company.

"There was not a single circus group in Turkey, and I thought why don't I do it," said Cankurt.

The circus performed its first ever show in Manisa's Kuyucak village. They earned TL 300 ($56.67) after the first show. For Cankurt, it was very precious.

"We traveled to small places, towns and villages. Eventually, our business grew, and we had a chance to meet and work with some of the best artists in the world. It has become our passion. My wife and I became the bosses as well as the artists in the circus," said Cankurt. 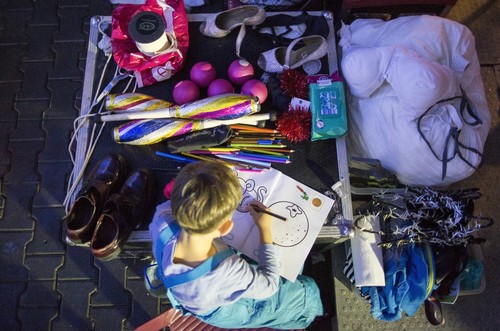 A child of one of the performers draws some pictures while his parents are on stage.

For the Cankurts, managing a circus is not about money but love. They love every aspect of their job, even when they have to erect the tent, sell tickets or sweep the floors. But they are not all happy to be Turkey's only circus company. "I wish there were other circuses so we could be examples and learn from each other," he said.

Cankurt added that they participate in international circus events and festivals. "We Turks have a very different energy compared to others. Our costumes, choreography and music are different from others, and they find it very unique and intriguing. Hence, they want to know more about us and work with us on different projects."

For Melike Cankurt settling down is not an option, and the life of a circus performer is ideally suited for her and her family. The Cankurts tried to settle down in İzmir, Ankara and Bursa but each time they tried to leave their nomadic life behind, they found it difficult and returned to their caravans.

"We just want to be near the circus tent, but it is not just us but all the other circus performers. I am sure that even if they checked into a five-star hotel, they would feel more comfortable near the circus tent. When we go to hotels, even for the holidays, I feel trapped between their four walls," said Melike Cankurt.

Although the circus performers enjoy what they do, they do not deny that their profession has risks. "Broken arms and legs or falling on our heads are normal accidents for us," she said, adding that: "Anything can happen to us anytime, but unfortunately there are no legal regulations to protect us. There is not a single film about us to show people how we live. There is only one film about circus performers titled 'Trapeze,' but as it is a drama and does not fully show our fears and everyday lives. Sometimes, we have no water or electricity in our caravans. As there is no circus tradition in Turkey, it is hard for people to know how we survive."

Melike Cankurt is a dedicated circus performer. She performed just 11 days after having a baby. "As a circus performer, I do not think pregnancy is something that can prevent us from performing. When I went into labor, our tent was being erected. There were no empty cars so I had to go to the hospital on a motorcycle. Even when I was pregnant, I never left the stage. I continued to perform. Because I exercised, I had an easy labor, and my baby was healthy," she added.

When you are working at a circus and it has become a family affair, there is one inevitable fact: the children are born and brought up behind the stage.

"Almost all the performers have children," said Melike Cankurt. "We have to make beds for our children in boxes while we perform on stage. Sometimes, our fans take care of them, feed them and put them to bed."

Ukrainian circus performer Anna Kozhynov and her husband Igor Kozhynov are also bringing up their 1 and a half year old backstage.

The Ukrainian couple and their baby, Milan, travel through Turkey as a family and meet new people every day.

Anna Kozhynov said they love the energy they get from the Turkish audience. "I want to thank our Turkish audience who attend our shows and applaud us. I breathe for the stage and the lights. People applauding me motives me. I am happy to be here in Turkey and to perform for Turkish audiences," she said.