Once upon a time, when West met East 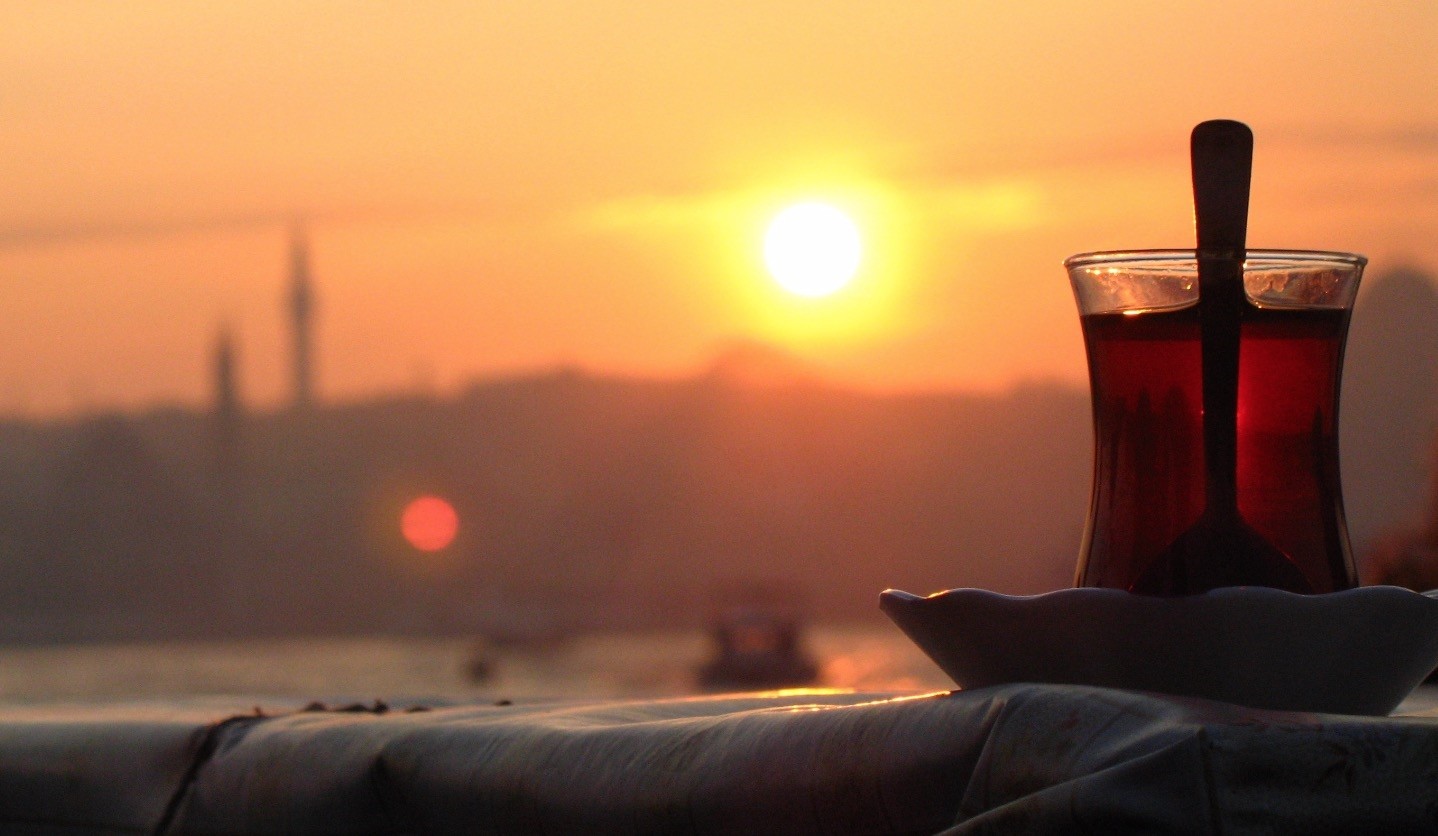 It is important for expats to find the balance of their own culture and the culture of their new home.
by Mindy Yartaşı Jan 09, 2019 12:00 am

Over the years, many people have asked how I got used to living in Turkey. Inevitability, I'd offer generic responses about being young and energetic or pointed to learning the language as a big step. In reality, both responses, although very true, were just the proverbial tip of the iceberg

Expats are often complemented for their "brave" choice to move overseas. Brave for making a huge change, for immersing ourselves in a new culture, having to learn a new language, the list goes on. Things get even more complicated for foreigners who go one step further and marry into another culture. On top of trying to find a balance between ourselves and the general population, we are also attempting to create a new life and integrate into a family that in every aspect is completely foreign to us. In my case, the transition meant finding a balance between my very Western personality, my future family's ultra-conservative expectations and mutual compromises. I guess you could say this is a behind-the-scenes look at when West met East.

I'm from a tiny town in the U.S., population 3,000, where close to 80 percent of the residents' families, primarily Christians of English and Irish decent, have lived for hundreds of years. My parents raised me to be independent – though in hindsight, my mother may say too much so. After making the decision to move to Istanbul, they weren't keen on the idea, but offered tentative support for my life-changing choice when I broke the news. Meanwhile, on the other side of the world, my husband, Bilgehan, who had the courageous task of telling his very conservative Muslim parents he wanted to marry an American, was pleading his case in Istanbul.

Luckily for me, Bilgehan has two curious younger siblings who helped break the ice during my first visit to Turkey and in the end, won over his parents on my behalf. However, families are much more than a mom, dad and siblings; there was also the extended family to contend with.

After suffering from a chronic illness, Bilgehan's paternal grandmother had a hunched back that left her height at around 4 feet 8 inches. Hard of hearing, her covered head always looked at the floor as she shuffled along in her traditional black booties – but don't let her physical frailty fool you. She made up for her limitations with keen eyes and a fiercely powerful presence.

It was the end of Ramadan, and aunts, uncles and cousins from Bilgehan's father's side had gathered at his parents' house for tea. In the crowded room, the only open spot, next to his grandmother, was offered to me. Having grown up in the village and leading a sheltered life in the city, she had never seen a foreigner up close. I could feel her eyes on me as I tried to smile and look engaged in the babble of conversation I didn't understand. Soon, I noticed the chatter had slowed, and all eyes were on me and the tiny woman. With a glance, I realized, while one hand still clutched her prayer beads, the other was tentatively reaching out with henna-stained fingers toward my head. No one else seemed uncomfortable or panicked, so I assumed it was normal. I sat patiently still as she gently touched my hair, proceeded to squeeze my arm – as if checking for ripeness – and gave my ribs a gentle poke. She even went so far as to lift the hem of my pants to check my ankle. I stole a quick glance at the other relatives to discover they were all sporting smiles of disbelief. Finally, I made eye contact with her and was met with a ghost of a smile and small grunt of approval. The conversation bubbled up again, and tea was served.

Not mine to change

Would this invasion of personal space be acceptable in the U.S.? Absolutely not. Honestly, it isn't even common practice in most Turkish families, but I was not trying to become a member of "most Turkish families." I wanted to be respected by this one. Bilgehan's grandmother was around 85 years old at the time and humoring her curiosity not only won her over but also other skeptical relatives in the room – and made a great story to tell for years to come.

Long-term multicultural relationships that extend beyond the interactions of two people require a lot of patience. One of the most important factors I have always tried to keep in mind is that the culture is not mine to change. I didn't move here to shape the country, nor am I powerful enough to do so. There are days this place makes me crazy, frustrated and sometimes feels completely backward but frankly, no one cares about my opinion regarding how they live, what they believe or their traditions. In the end, I am the one invading their space. As such, I have made a real effort to drop the feeling that things needed to adapt to me – at least to a certain extent.

At first, respecting another culture is easy, especially when you're visiting; however, when you've chosen to immerse yourself in it, to live out most of your life there, things get more complicated. It's important to find a balance between being respectful and retaining your own identity. For example, do I hate serving people? Yes. But do I get up and refill my father-in-law's tea when it's expected? Also, yes. Why? Because he has spent 70 years expecting this and though I could say no, his expectation and me meeting it work more in my favor than if I were to refuse the small task. Do I, however, serve tea to my husband? Perhaps once in a blue moon.

To make life easier, I have found there are appropriate moments to swallow my pride and respect what the culture expects of me. In short, I have learned to adjust, within limits, to exceptionally foreign situations. This, in turn, has earned the respect of those around me, who saw I was making an effort to accommodate their expectations. In the end, I married into a conservative Muslim family whom had had little to no contact with foreigners. I was quite literally the "other" in this situation – of which I am no longer because I gave them space to comfortably adjust to me. The same concept parallels my first visits to my husband's village, Demirli Köyü, in Turkey's Çankırı province.

This is a great example of interacting with a community versus building close relationships with key individuals. Respecting the culture and understanding its expectations are important, as is understanding that you will simply remain foreign to many. That was the case in my husband's village, a tiny centuries-old settlement nestled in the rolling plains of central Turkey – winter population 32, summer population 259. Around 80 percent of the locals have the last name that I now claim as my own. As a rule, Turkish women who don't normally wear headscarves do here to respect local conservative Islamic traditions and to avoid – most – curious glances. Quite possibly the first non-Turk to ever visit and definitely the first American, my lack of a headscarf, obsession with the cute livestock and huge DSLR camera may have given me away. Enchanted by the interesting mix of mud-brick houses and modern concrete, I paid little heed to the looks I got from those in the street. To be honest, I didn't care. This was an instance of me being a temporary visitor versus needing to create close, personal relationships.

As a community, I knew they would come to terms with the fact that I was foreign and eventually accept me for me, just as Bilgehan's family had, even in my American tourist mode. In the meantime, I spent my days wandering the beautiful grass-covered plains, taking pictures and drinking sometimes rather awkward teas with the locals – who have since welcomed me as a foreign member of their community.

The door flew open, held by a tiny Turk, all headscarf and smiles, the first time I met Bilgehan's maternal grandmother. "Hello!" she said, one of the few English words she knows, and threw her arms around my neck, stretching her 4-foot-11-inch frame to reach. She beamed as she led me into her living room to introduce me to her mother, a tiny, fragile 95-year-old who patted the spot next to her, took my hand in hers and smiled. The rest of the family filed in, offering warm greetings. "Are you hungry?" she asked in Turkish. Famous for her homemade walnut baklava, baked goods and tarhana, a soup popular in Turkey made from a dried mix of yogurt, tomato paste and spices, she immediately insisted we sit at the table – over the years, I've learned there's no sense to decline the offer; she will sweetly protest your refusal until you give in. Excited to have a foreigner in her home, she immediately grabbed Bilgehan as an impromptu translator, sat near me after we ate and asked questions about me, my family and if I liked Turkey, eager to get to know her new American granddaughter.

In January 2005, I impulsively hopped on a plane heading to the unknown. It has taken an open mind, patience and a lot of stumbling to build a life here. After all the compromises and calculated interactions, do I regret my decision? Absolutely not. Turkey has broadened my perspective about many things, including religion, family ties and deep-rooted cultures. In a tiny way, I've also left my mark on it, or at least on one accepting family and a tiny, secluded village on the plains of Anatolia.