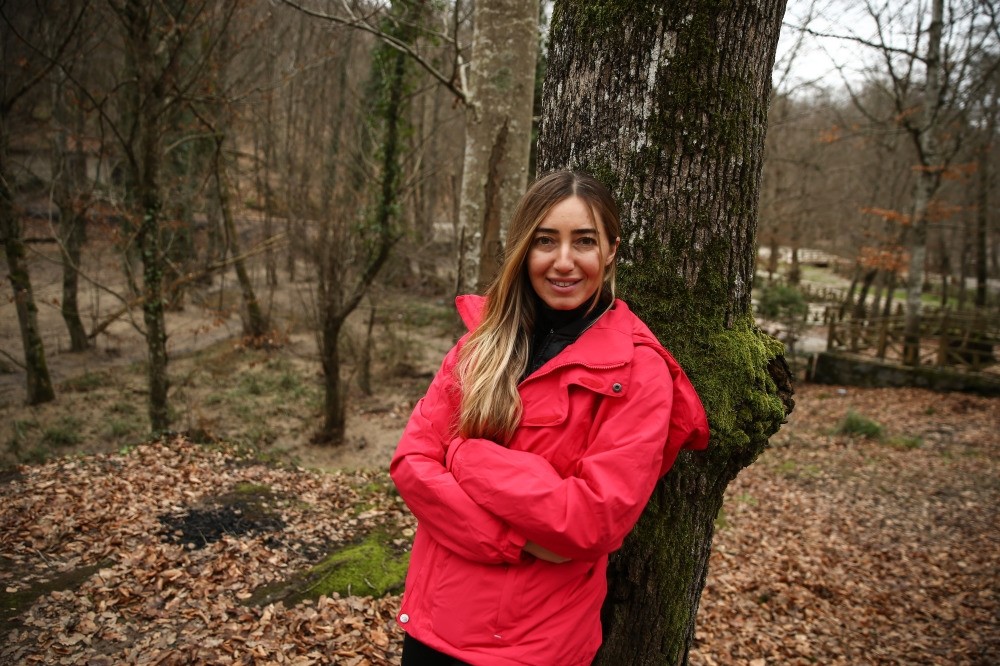 Record-breaking diver Şahika Ercümen will push the limits of her body in Antarctica during Turkey's 3rd National Antarctic Science Expedition. To get ready for this challenge, Ercümen has been training day and night for months

National sportswoman Şahika Ercümen, who will dive in Antarctica at the end of January within the scope of the 3rd National Antarctic Science Expeditions, continues her preparations.

Ercümen will go to Antarctica, also known as the "White Continent," for Turkey's science project conducted with the technical coordination of the Istanbul Technical University Polar Research Application and Research Center under the auspices of the presidency and in the charge of the Industry and Technology Ministry, and will pass the pole in 30 days with a research vessel.

Explaining that she had received an offer from Industry and Trade Minister Mustafa Varank to participate in the project after the record she broke at Salda Lake in Burdur province's Yeşilova district in October of last year, Ercümen note: "When our minister called to congratulate me, he told me that they will send a scientific team to Antarctica so that they can conduct research there in terms of technology. He also added that I could contribute to it by diving. It was so exciting to think that I will dive in the most extraordinary place in the world. I accepted the offer. Then, we started to do research and to work."

She stressed that she supports her preparations in Turkey and that they will go to Antarctica in a week. "I need to increase my body fat in order to be resistant to the extreme cold. This is why I changed my diet. I ate more oily foods. I tried to gain some weight, especially increased the number of the aerobic practices that I do outdoors. I swim in the sea as much as possible. I do running, walking and breathing exercises."

Highlighting that her dive in the South Pole is important in terms of introducing the project in Turkey and the world, the 34-year-old national sportswoman continued: "This time, it is so precious for our country. I am proud to be a part of this. We were the observer country to date. We will have a right to open a base there after this expedition, and we will be one of the adviser countries. We want to wave the Turkish flag."

Şahika Ercümen reported that the air temperature will be around minus 30-40 degrees Celsius in Antarctica, and they are planning to dive in short periods because of the risks of hypothermia.

Mentioning they dive in very hard conditions, Ercümen stressed: "The body spends the highest energy when it tries to maintain its temperature. This is serious. This is why we plan our diving performances as short periods, like 20-30 minutes. We do not have an opportunity to dive in the water for so long. We are not planning to dive too deep, as well. There are whales, penguins, sharks and seals that have never seen a human before. None of them ever aim to attack a human, but we do not know how they will react as they have not seen a human before. We will perform adaptation dives without both disturbing them and taking many risks."

Drawing attention that they will take maximum precautions to prevent all problems that can occur during the diving, she added: "We are trying to take precautions in line with the risk factors. For example, we want to have protective clothes and heated blankets with us in case our ship cannot find us after we dive. If it cannot find us for a while, we will have to wait for it on a glacier. We try to make emergency plans. Some of the teams that have gone before waited for a long time to be taken by their boats. We hope that we will not experience such a situation."

The record-holding sportswoman reported that Antarctica is not preferred by divers much because of its harsh conditions. "The conditions on the White Continent are so difficult. I will be one of the rare sportsmen to have dived in Antarctica. I will be the first Turkish woman who dives by holding her breath without a diving tube," she added.

She spoke about the difficulty of having no communication tools like phones and the internet during the 30-day expedition: "This expedition is organized for the sake of technology and science, but we do not have any technological opportunities there. It is a good thing to see that only natural rules are valid in some parts of the world. This will be one of the hardest parts of the expedition. I will not communicate with my family and loved ones, and will be separated from them. I will not know what is happening in Turkey. There may be good or bad things here. It will be an extraordinary experience. I am very excited. I will be away from the world for 30 days. There, a scientific team in addition to penguins, seals and whales becomes your best friend. You sleep with stars and sound of whales at night. You try to be a part of nature. If being away from technology is necessary for it, we agree."

Having set nine world records in her career, Şahika Ercümen said that the diving, which she will perform as part of the Turkey's science project, will be the beginning of a new adventure.

Implying that she thinks she can do better after every success, she stated: "When you think whether this is the best thing that you can do, you suddenly recognize that you may be able to do even better. When you achieve it, you see there is more. If someone had said to me that I would dive in Antarctica five years ago, I would have probably thought it would be one of the best diving performances of my career and therefore I would end it there. However, the situation is not like that now. There will be other steps then. There will be better ones. I can say that this is the beginning of an adventure. Even if I cannot say in detail, we are planning to perform different dives in which we will push the limits of both nature and human beings."