How the Ottomans would handle protocol crises 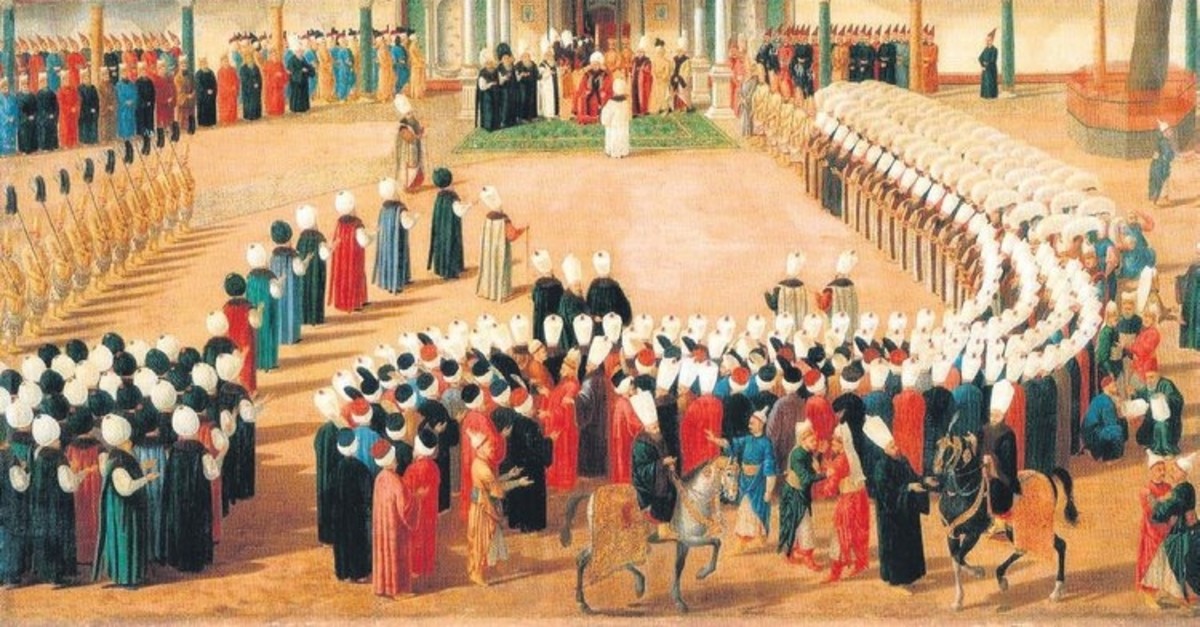 Months ago before the March 31 local elections, a debate regarding the prospective place of official protocol in public life was circulated in the media. This was because of the unclear situation of Binali Yıldırım as he had been the prime minister when he was selected as a candidate for the Istanbul mayorship. During the reign of Ottoman Sultan Süleyman I (Kanuni Süleyman), a similar problem about protocol arose and the sultan solved it by ordering that among the top bureaucrats those with more seniority come before the others regardless of their new positions.

Great states adopt strict protocol rules that display their grandeur. Various ceremonies ranging from the reception of an ambassador to the seating of statesmen in the presence of the sultan are subject to specific rules and codes.

During the Ottoman period, the protocol order, all celebrations and reception ceremonies were overseen by the master of ceremonies. Points like who is to be presented to the sultan and how, who is to gather in the palace on the day of the Imperial Council (Divan-ı Hümayun), the seating order of council members, who is to serve council members and how, how the table is to be laid after the meeting and the etiquette for banquets were described to the last detail.

How the grand vizier, viziers, scholars, bureaucrats and officials should dress during working days, their attire during days of ceremony, how the sultan and grand viziers enter and leave their palaces, how the military campaigns are organized, in what order the tents of state officials are set up, were also regulated in books of ceremonies and laws.

Ceremonies during Eid (bayram) and on holy days (kandil), succession ceremonies of sultans, the sultan's Friday salutation, the sultans' Eid processions and tomb visits, gatherings for the recitation of Mawlid-i Şerif (a poem commemorating the Prophet's nativity), sultans' marriage contract, reception of diplomats and how they are given audience were also described in great detail.

All protocol affairs were defined with meticulous attention to details. For example, there were specific rules dictating who may stand on what side of the sultan and in what position during an Eid ceremony, how the Eid greeting reception is to be held, what kind of gifts to be given during that, in which order and attire soldiers, scholar, bureaucrats, functionaries, and palace officials will appear before the sultan, who will kiss the sultan's hand who will kiss his robe and how will the sultan will treat them.

Celalzade Mustafa Çelebi, one of the greatest Ottoman bureaucrats who served as nişancı (chancellor) for 23 years between 1534 and 1557, left his mark on the 16th century Ottoman bureaucracy. Celalzade gave new direction to the Ottoman bureaucracy with the procedures and principles that he developed. A lot of officers who rose from the ranks during his term also attained important positions within the Ottoman bureaucracy. During the reign of Kanuni, a protocol issue that also involved Celalzade had come up. Historian İsmail Hakkı Uzunçarşılı narrates the issue by quoting from "Kunh-ül Ahbar," a book by Ottoman chronicler Gelibolulu Mustafa Ali: "At the time of Sultan Süleyman, during Celalzade Mustafa Çelebi's tenure as Koca Nişancı (grand chancellor), who was of great help and diligence in arranging and organizing Ottoman laws, Nevbaharzade was promoted to second treasurer (ikinci defterdar) and that caused a shift in the court protocol in accordance with codes and precedents, as he came to sit above his former superior (Celalzade) under whom he had previously served as divittar. Nevbaharzade refused to sit above Celalzade and said, 'I refuse to take precedence over Mustafa Çelebi, my benefactor whom I served and bowed before as recently as yesterday, even if you depose me.' Upon hearing the issue, Sultan Süleyman appreciates Nevbaharzade's concern and he orders that seniority (kıdem) should be observed thereafter to determine the precedence between nişancı and defterdar in protocol and the one with more years of service should take precedence over the other. The grand chancellor was thus placed above the treasurer and that practice became established."

Ottoman bureaucrats and Sultan Süleyman revised the existing protocol rules and solved a protocol issue by taking into consideration the experience and services of state dignitaries and whether they served under each other.

During the Ottoman times, the official in charge of protocol was called teşrifatçı (or teşrifati, master of ceremonies). In the beginning, a treasury clerk carried out that duty, but it became a separate position over the course of time as the workload necessitated. In the early periods, nişancı, (chancellor), one of the six highest-ranking government bureaucrats, was given the authority over the protocol order and the issues pertaining to ceremonies. As the master of ceremonies became a separate position, these powers were transferred to the Office of Ceremonies (Teşrifat Kalemi). Beginning with the 18th century, teşrifatçı acted as a Babıali (Sublime Porte, the government) bureaucrat who was directly responsible to the grand vizier. Teşrifatçı maintained the protocol order and organized ceremonies. Laws concerning the Ottoman protocol and ceremonies were included first into Mehmet the Conqueror's Kanunname (legal codes). Laws that were enacted later introduced new regulations in line with the emerging needs at the time and elaborated the protocol. The registers on daily ceremonies kept by the teşrifatçı had served as sources for later arrangements.

While the Office of Ceremonies remained in place after the Tanzimat (Reformation) era, another office of ceremonies was created within the Ministry of Foreign Affairs (Hariciye Nezareti). Also, during the reign of Abdülhamid II, the General Directorate of Protocol (Teşrîfât-ı Umûmiyye Nezâreti) was established. During the Second Constitutional Period (İkinci Meşrutiyet), all the offices of ceremonies and protocol were brought together under the Office of Imperial Protocol (Teşrifat-ı Umumiye Dairesi).