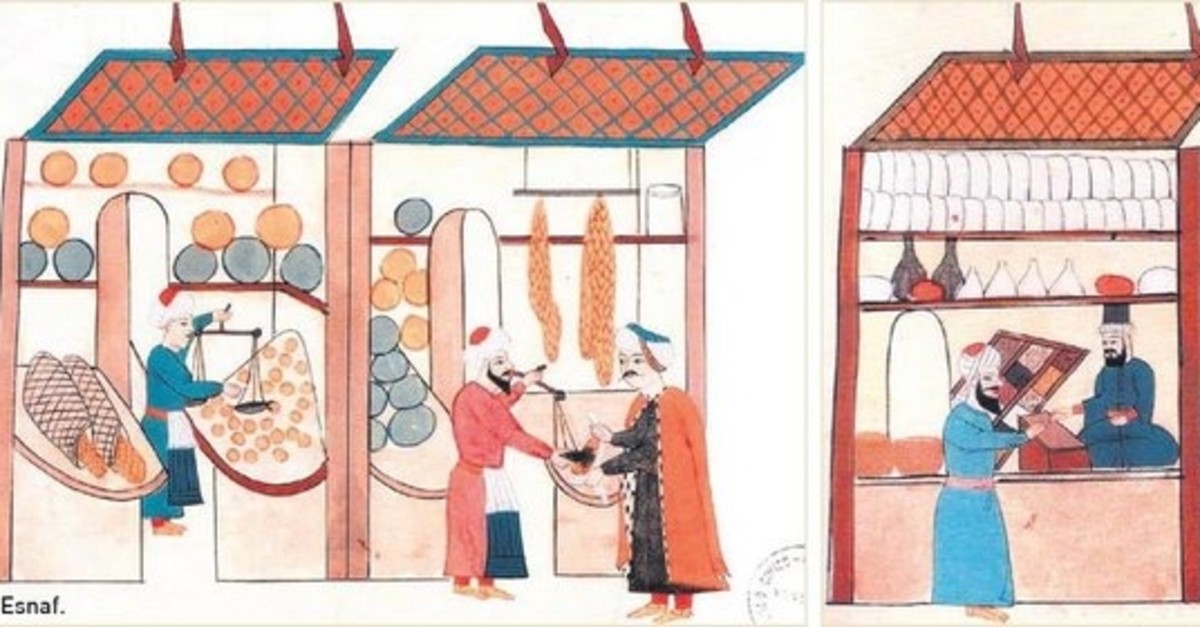 In the Ottoman era, prices of goods to be sold in the market were determined by the state. Tradesmen who charged a higher price for their goods than the one fixed by the state were bastinadoed (beaten on the soles of their feet) in the middle of the market as a warning to all.

During the Ottoman times, tradesmen were classified into two groups: Tradesmen of the palace and independent tradesmen.

Those providing the needs of the palace were called "Ehl-i Hiref-i Hassa." Numbering about 2,000, this group included tradesmen and craftsmen from many different professions like bakers, halva makers, cauldron makers, furriers, paper makers, goldsmiths, locksmiths, tailors and cooks.

Free tradesmen produced and sold goods as part of guilds.

Prices were determined by the state

The Ottoman administration had kept guilds under constant control to protect its subjects from abuse. No tradesman could charge a price higher than the one fixed by the state.

It was the foremost duty of the grand vizier, who acted in the name of the sultan, to make sure goods sold in markets were priced no higher than the state-specified rate. Even a rumor about the neglect of duty of price control, let alone shirk it, would lead to his dismissal from the post. That's why the grand vizier, accompanied by the judge (qadi) of Istanbul and the market inspector (muhtesip, the head of the then-municipal police), conducted shop inspections and had those engaged in black marketeering, charging higher prices or producing low-quality goods bastinadoed.

Many tradesmen, and particularly grocers, could put at most a 10 percent markup on the goods they purchased. If a tradesman was found to be selling goods with more than 10 percent, first he would be taken before the qadi and then given a flogging. Fruits like watermelons, melons, apples, pears and cherries, and legumes like lentils, chickpeas and rice were sold at prices determined by the qadi seasonally.

Also, the prices of clothes made by tailors were set by the state according to type of the fabric used and the accessories on them. Tailors charging prices higher than the one set by the state would be brought before the judge and, if found guilty, exposed by putting a wooden cap on their head.

The two products that were kept under the tightest control in the Ottoman Empire were bread and meat. Meat was priced in accordance with the season and month, being expensive during winter and cheap in summer. During May and June and between September and November it was sold for 1 asper (akçe) a kilogram, 1 akçe for 1.2 kilograms during July and August, and for 1 akçe for 850 grams from December to the end of May. While goat meat was more expensive than mutton, the most expensive was lamb meat. Goat meat and mutton were sold separately and those mixing them were punished by the qadi. Those who charged higher for meat than that set by the state or gave short weight were fined 1 akçe for every 5 grams of the meat they were selling.

A strict inspection system was in place to make sure people ate bread made from cheap and good wheat. As bread was a staple, all state officials in general and the sultan, in particular, kept bakeries under a close watch. If bread was found to contain another material or was not fully baked, the baker would be bastinadoed. If loaves were underweight, the baker would be ordered to wear a wooden cap exposing his guilt, or fined.