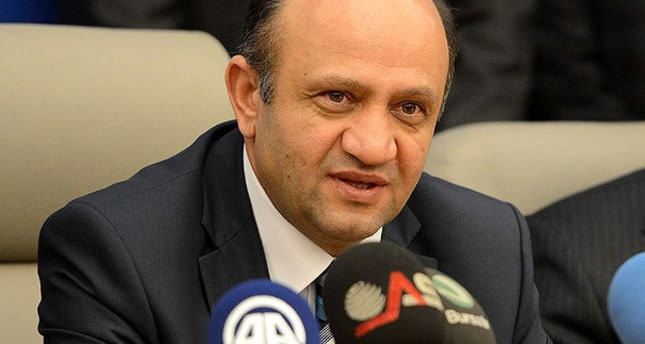 by daily sabah Mar 18, 2014 12:00 am
ISTANBUL – The Minister of Science, Industry and Technology Fikri Işık said, "Net sales in the Turkish manufacturing industry were TL 824 billion in 2012, while it climbed up to TL 921 billion in 2013. This is a significant increase.

The operating profit of companies in the manufacturing industry was TL 39 billion in 2012 and TL 56 billion in 2013. Operating profitability rose from 4.7 percent in 2012 to 6 percent in 2013." The minister stressed that the data showed Turkey did not incur much economic harm. "We have confidence in Turkey," he said. "These figures indicate how right we were in our confidence. Net sales in all sectors increased from TL 3.163 trillion to TL 3.604 trillion, which is a remarkable boost. At the same time, operation profits rose from TL 107 billion to 135 billion, which is an increase from 3.4 percent to 3.7 percent in operating profitability. The data has significant implications. Turkey did not cease growing despite all operation attempts in 2013 and interventions against its stability. The country manufactured and sold more efficiently."

Işık emphasized that this growth will continue in 2014 and all attempts to disrupt Turkey's stability will be rebutted. Işık pointed out that Turkey's economics remained positive despite the "turbulence" the country has been experiencing since the end of May 2013. "In fact, it was the brightest month of the history of the Republic in terms of economic data," he said. "We paid our debt to IMF. Two credit rating agencies increased our credit rating and deemed us investable. The state's borrowing rate of interest declined to the lowest level in history, to 4.61 percent. Real interest declined to negative two. This has a special meaning for manufacturers: interest was no longer a means of investment. Those who have capital were to head for production. The stock exchange broke a record and reached 92,000 points. Tenders for the third airport were completed." The minister noted the operations were an attempt against the government with the intention of discrediting Turkey.

Işık noted some external powers also targeted the stability of Turkey with the Dec. 17 operation and added, "Just to spite these attempts at discrediting Turkey, I wish to share two critically important data points with you. As of the end of 2013, net sales in Turkey's manufacturing industry, operating income and profitability soared in 2013 compared to 2012."