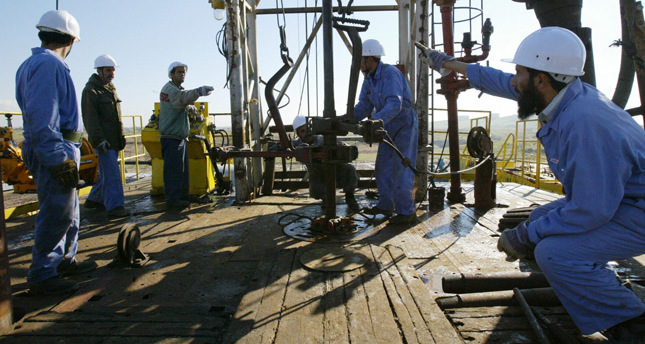 by AA May 03, 2014 12:00 am
BURSA — Turkey is ready to facilitate the sales of Kurdish oil to international markets, Turkey's energy minister said, as the volume of crude oil from the semiautonomous Kurdish region of Iraq reached 1.8 million barrels in tanks at Turkey's Mediterranean export hub of Ceyhan.

The flow of oil from northern Iraq resumed with a capacity of 100,000 barrels a day, Taner Yıldız said on Friday in the northwestern city of Bursa.

Prime minister of Iraq's Kurdish administration, Nechirvan Barzani, said on Sunday his government planned to start the selling of 1.5 million barrels of oil stored in the Turkish port of Ceyhan on May 2. The statement came just before Iraq's parliamentary elections, which started on Wednesday.

"I think Mr. Barzani meant the consignment of the oil, not the sales, in his statement. The sales may begin within 3 days or a week," Yıldız said.

Iraq's central government opposes the sale of the oil, saying it violates the federal constitution and bypasses the national oil company, State Oil Marketing Company. Baghdad also insists that oil revenues generated from the sales must be deposited in a fund at the JP Morgan Chase, the largest bank in the United States, whereas the Kurdish government and Ankara agreed that the revenues, estimated at around US$200 million, would be kept at Halkbank, Turkey's state-owned lender.

"The oil stockpiles belong to Iraq, and, of course, they will sell it themselves," Yıldız said. "Turkey only facilitates the procedure and paves the way."

He said the sales revenues would contribute to stability, growth and normalization in post-elections Iraq.

The tension between the central government and the semiautonomous Kurdish government has remained strained over disagreements on the payment method and control of oil shares in the country.

The tanks at the Ceyhan port, located in the southern province of Adana on the Mediterranean coast, has a storage capacity of 2.5 million barrels of crude oil, which flows via Kirkuk–Ceyhan Oil Pipeline. The pipeline, Iraq's largest crude oil export line, carries oil from Iraq's oilfields in the Kurdish-controlled Kirkuk to Turkey.

The oil flow through the pipeline is frequently hampered by armed attacks and technical breakdowns.