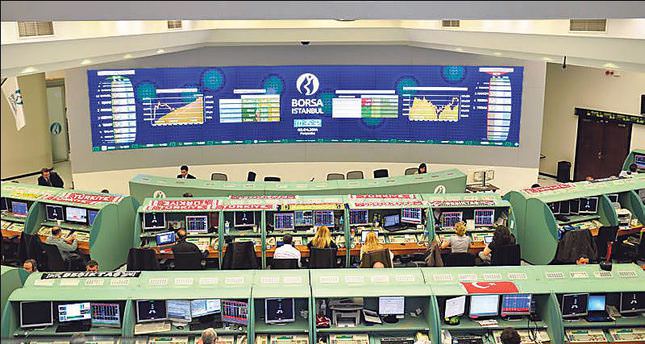 by May 03, 2014 12:00 am
ISTANBUL — Better-than-expected results from several large companies, including Akbank, Anadolu Sigorta and Emlak Konut, lifted the Istanbul Stock Exchange by 1.64 percent to 75,086 points, outpacing the broad
emerging markets index.

Turkish shares were boosted on Friday by a string of forecast-beating first quarter results, while bonds continued to be supported by the central bank governor's hint on Wednesday of a rate cut. Results for several companies, including lender Akbank, insurance company Anadolu Sigorta and real estate company Emlak Konut, beat analysts' forecasts and lifted the equities market.

Fixed income markets were supported by Başçı dropping hints of a rate cut, causing a bond rally. The 10-year benchmark bond yield was 9.27 percent on Friday, down from Wednesday's close of 9.37 percent.

Turkish analysts looked ahead to U.S. non-farm payroll which rose at its fastest clip in five months in April while the jobless rate dropped, building on a strong economic momentum. However, a tone of optimism prevailed. "With one of the highest interest rates among emerging markets, uncertainty in Russia making Turkey look comparatively better and the central bank's desire to keep inflation down, the outlook for Turkish assets is positive," Dernek added.