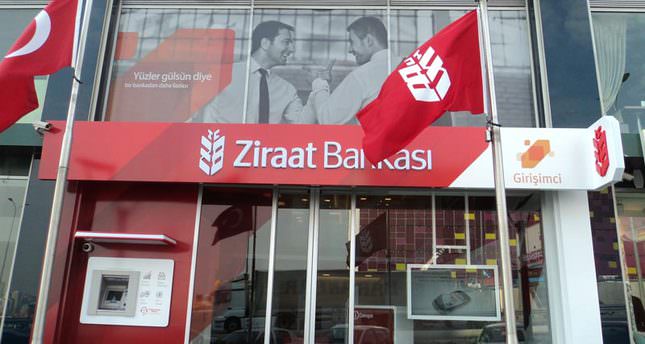 by Daily Sabah May 06, 2014 12:00 am
ISTANBUL — Ziraat Bank, which has one of the largest networks in Turkey and serves at 83 points in 16 countries, is looking to expand. Ziraat Bank will establish a branch in Kosovo and one in Montenegro.

According to Turkish outlets, Osman Arslan, Ziraat Bank's vice general director responsible for international banking and partnerships, announced the bank seeks investment opportunities in seven countries on three continents. As Turkey's Dünya newspaper reported yesterday, Arslan noted Ziraat Bank has growth strategies in numerous countries in terms of international branches or partnerships with banks. "In countries where Turkish investors and entrepreneurs are active, when we recognize a certain potential by also taking into consideration the volume of foreign trade with Turkey, we embark on enterprises in bank or branch status," he said. "If we have cultural and historical bonds with that country, this is also a notable criterion for us."

He further added that in this sense, the Balkans is a region where Ziraat Bank wants to be active. "We now have a bank in Bosnia and Herzegovina," he said. "We serve Greece and Bulgaria with our branches. The executive board decided to start banking operations in Kosovo and Montenegro. We will operate in Kosovo with branch status and in Montenegro with bank status."

Arslan also explained the bank's plans for the upcoming months. "We have subsidiary banks in Kazakhstan, Turkmenistan and Uzbekistan in Central Asia," he said. "Moreover, there is a bank in Azerbaijan, which we have a partnership with. We have appealed to corresponding authorities in China to be able to establish an agency in the country. We are waiting for the favorable reply from Chinese authorities." According to Arslan, Ziraat Bank's management board believes in the importance of being active in the area in order to gain access to Gulf capital and to have a bigger share in national foreign trade with upside trend and transactions of Turkish banks. "We are interested in Dubai in the Gulf area. Moreover, we included Singapore in the perspective," he said.

Arslan also noted the bank will pay attention to South and Central American and North African counties. "We monitor economies like Mexico and Brazil in Latin America," he explained. "Latin America is not our priority, but North Africa bears utmost importance. We want to provide an effective banking service in the area, especially in Libya and Algeria."