Credit Suisse in talks to pay $1.6B to resolve US tax probe 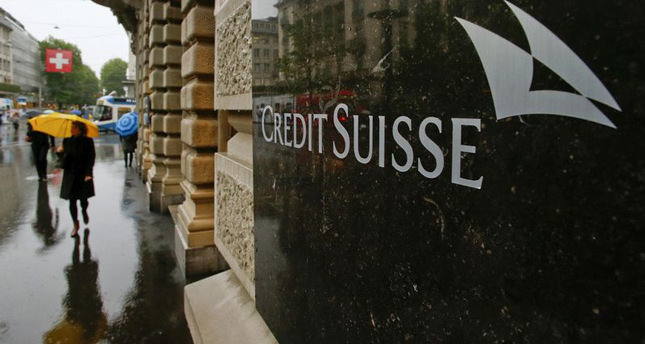 The Swiss bank is accused of helping Americans evade U.S. taxes. It is alleged that the bank and will plead guilty and is in talks with the Justice Department to pay as much as $1.6 billion to resolve an investigation

WASHINGTON D.C. — Credit Suisse Group AG is in talks with the U.S. Justice Department to pay as much as $1.6 billion to resolve an investigation into the bank's role in helping Americans evade U.S. taxes, a person familiar with the matter said on Monday. Prosecutors have also been pushing for Credit Suisse to plead guilty in connection with the probe, two people with knowledge of the talks said. The penalty would exceed the 895 million Swiss francs ($1.02 billion; TL 2.1 billion) that Credit Suisse has set aside to pay potential penalties to the United States. It's also much tougher than the settlement the Justice Department reached in 2009 with Swiss banking giant UBS AG , which was also accused of helping Americans dodge taxes.

In that settlement, UBS paid $780 million to settle similar charges, which is roughly half the amount being discussed for Credit Suisse, even though Credit Suisse's offshore private banking business was much smaller than UBS's. Also, UBS was allowed to enter a deferred prosecution agreement and criminal charges were later dropped against the firm. It is unclear what sort of impact a criminal plea could have on Credit Suisse. Historically, the Justice Department has rarely pursued criminal prosecutions against financial firms, especially global companies that could become destabilized following an indictment. Much of the concern stems from the 2002 indictment and eventual demise of accounting giant Arthur Andersen, which led to the loss of about 25,000 jobs and greater consolidation in the industry. But the Justice Department has recently taken a harder stance, in the face of criticism about its record. The Justice Department on Monday morning posted a video in which Attorney General Eric Holder said close cooperation with regulators was paving the way for criminal actions against financial institutions. "I intend to reaffirm the principle that no individual or entity that does harm to our economy is ever above the law," Holder said. "There is no such thing as 'too big to jail.' The Justice Department came under particularly intense fire from the Senate Permanent Subcommittee on Investigations, which in February accused the agency of not aggressively pursuing Swiss banks that helped Americans dodge taxes, including Credit Suisse.

U.S. lawmakers and influential U.S. District Judge Jed Rakoff of Manhattan have accused the Justice Department of shying away from high-level financial prosecutions.

Credit Suisse in February agreed to pay $196 million to resolve a related case from the U.S. Securities and Exchange Commission, which accused the Swiss bank of providing brokerage and advisory services to U.S. clients without registering with the SEC. In a sign of the delicate nature of the Justice Department negotiations, Switzerland's finance minister met with Holder in Washington on Friday to discuss the investigation of Swiss banks. A Swiss spokesman said the minister, Eveline Widmer-Schlumpf, was seeking "fair and equal treatment" of the Swiss banks involved in the probe. That discussion followed a meeting U.S. Justice Department officials held with U.S. regulators last month to make sure that a criminal plea would not cripple the bank's ability to do business in the U.S., a person familiar with the matter said. A Swiss government source said that the most likely result from the recent negotiations is a guilty plea from Credit Suisse. "My impression is that it will go quickly and it could be in the coming weeks," the Swiss government source said.