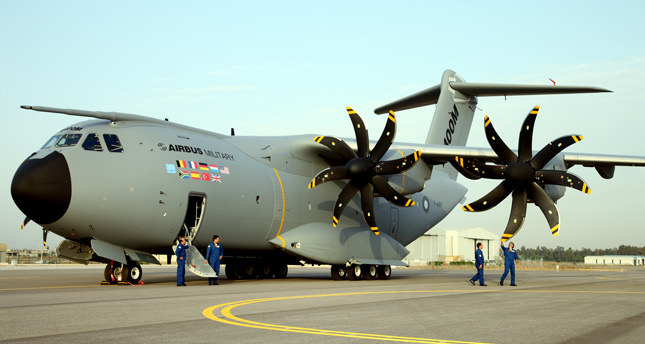 Project Manager of the A400M Transport Aircraft Osman Soylu said that 172 transport aircrafts will be produced with partner countries, each is costing $181.5 million.

All parts of the plane will be produced in partner countries' local units, and Turkey has 6 percent of shares in the production.

According to project manager, it will provide more job opportunities in partner countries.

The transport plane project was launched in 2003 due to the combined needs of 7 European Nations regrouped within OCCAR (Turkey, Belgium, France, Germany, Luxemburg, Spain and the UK).

According to Soylu, A400M project will be an important source for the country's economy. 'Turkey will generate great revenue through A400M project."

Most of the Western military were dependent on the United States for long range transport until the A-400M.


The "versatile airlifter" A-400M performs three very different types of missions: it is able to perform both tactical missions directly to the point of need and long range strategic/logistic ones. And it can also serve as an air-to-air refueling "tanker."

Four unique counter-rotating Europrop International (EPI) TP400 turboprops power the A400M. It offers a wide flight envelope in terms of both speed and altitude. And it can be used to help in humanitarian operations.

The first test flight of the received A400M was held at Etimesgut Air Base in Ankara and the second took place at the 12th Military Airbase Command in Kayseri province in July 2013.

The A400M was designed for military use but can also serve civilian purposes.