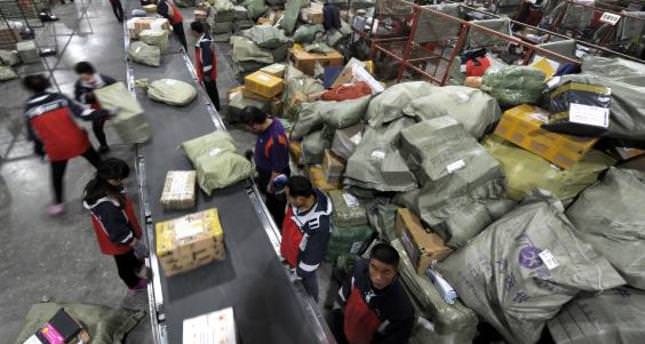 by May 12, 2014 12:00 am
HONG KONG — Alibaba Group Holding Ltd's plans for a giant initial public offering in New York highlight vast potential for e-commerce in China - and the weak link the logistics industry must fix if explosive growth projections are to be reached.

The ageing warehouses that supply goods to customers across the world's second-largest economy are already creaking under the strain, lacking the automation and state-of-the-art technology that has fuelled the rise in the United States and Europe of Amazon.com Inc. By 2020 China's e-commerce sector will be larger than those of the U.S., Britain, Japan, German and France combined, KPMG said in a recent report.

To cope with the China surge, as much as $2.5 trillion may need to be invested in buying land and constructing warehouses alone over the next decade and a half, according to one builder. That's drawing the attention of global private equity firms like Blackstone Group LP and Carlyle Group LP as they seek to benefit from an anticipated investment boom.

"Over the next 15 to 20 years, the real cost of building warehouses is going to be staggering," said Jeff Schwarz, co-founder of Global Logistic Properties Ltd (GLP), the biggest foreign builder of logistics facilities in China.

With each new facility the size of several large sports stadiums, that translates to around 2.4 billion square meters of new warehouses - an area close to two-thirds of the total land mass of Taiwan. And GLP estimates the $2.5 trillion needed over the next 15 years will still only increase per capita fully automated modern warehouse space to just a third of that of the U.S.

Alibaba controls 80 percent of all online retail in China, and its logistics partners delivered five billion packages last year from deals struck on its internet marketplaces.

While transport infrastructure has kept pace so far with Alibaba's rise, warehousing is a key to the supply chain across the e-commerce industry that logistics specialists say is in serious need of a makeover: Boston has more modern warehouses than the whole of China, says Stuart Ross, head of Industrial at real estate consultancy firm JLL China.

Less than 20 percent of China's warehouses are categorized as modern, with fully computerized tracking systems and the latest in retail technology, according to GLP and other warehouse builders. Many facilities serving Alibaba and its peers are located in areas that are tough for trucks to access. They often lack raised loading bays to let packages simply roll off conveyor belts into the back of trucks: Instead, trucks are loaded and unloaded by manual labor.

That's a headache that can cut into profits for e-commerce firms. Despite China's wages being much lower than in the U.S., it can cost over twice as much to transport goods in China compared with the U.S., says GLP.