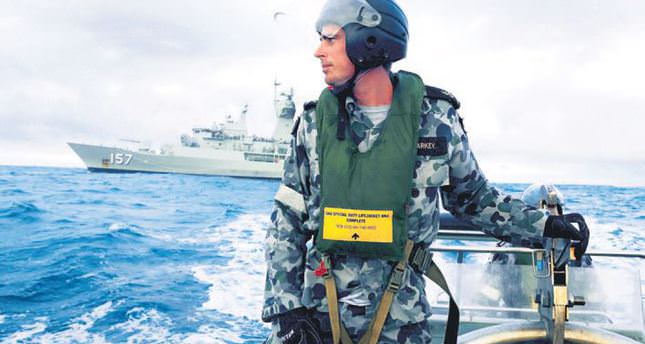 by Anadolu Agency May 14, 2014 12:00 am
Tracking aircraft by satellite, cloud storage of black box data and other technological innovations are being considered by aviation officials in the wake of Malaysia Airlines flight MH370's disappearance. The fate of MH370 has become one of the greatest mysteries in aviation history since it vanished on March 8 during a flight from Kuala Lumpur to Beijing with 239 people on board. Despite a massive international search in the Indian Ocean, no trace of the missing Boeing 777 has been found.

The International Civil Aviation Organization (ICAO) held a special meeting Monday and yesterday in Montreal to discuss how to prevent a recurrence of this tragedy, as well as the mystery that surrounds it. These technologies could allow, for example, basic data such as an aircraft's position, altitude, speed and course recorded and transmitted via satellite in the event of a sudden change, said the ICAO.

Inmarsat Plc, a provider of global mobile satellite communications services, said it will offer free basic tracking services for planes flying over oceans in the hope of preventing another incident such as the loss of Malaysia Airlines Flight 370. The British company said the service is being offered to all 11,000 commercial passenger aircraft already equipped with an Inmarsat satellite connection - most of the world's long-haul commercial fleet. Inmarsat would also offer a "black box in the sky" service under which a plane that had deviated off course could transmit historic and real-time information from the flight data recorder and cockpit voice recorder. These would not be free.
Inmarsat, which has played a role in the search for the missing plane, said the service would allow a plane to determine its location using GPS (Global Positioning System) and send that data over Inmarsat's global network at 15-minute intervals.

French authorities had already lobbied the ICAO to adopt the new standards following the June 2009 crash of an Air France flight from Rio de Janeiro to Paris that killed 228. The jetliner's black box was not recovered from the bottom of the Atlantic Ocean until 2011, after an exhaustive search of a zone not covered by ground radar. "For the general public, it has become unthinkable that a flight can simply disappear," says a European Union discussion paper posted on the ICAO website. "An aircraft should be permanently tracked, even beyond radar coverage and in case of an accident, it should be immediately located."

Ahead of the two-day meeting, the ICAO asked industry groups for a complete list of technologies that might be useful to the airline sector. Twenty-two companies, including Globalstar and Rockwell Collins, responded to the call. "While GPS is commonplace in cars and mobile phones, the international air traffic control network is still almost entirely based on radar. The Boeing 777 with 239 people on board was en route to Beijing from Kuala Lumpur on March 8 when it disappeared. The plane automatically sent signals to a satellite belonging to Inmarsat after the plane's transponder and its communication systems had shut down but researchers were unable to find the plane before the batteries in the black box flight recorder shut down. Malaysia's government said the plane's last position was in the middle of the Indian Ocean, west of Perth, and that the flight ended there. It has not been found.
RELATED TOPICS