Most Asian shares slip on anxiety over Iraq, dollar edges up 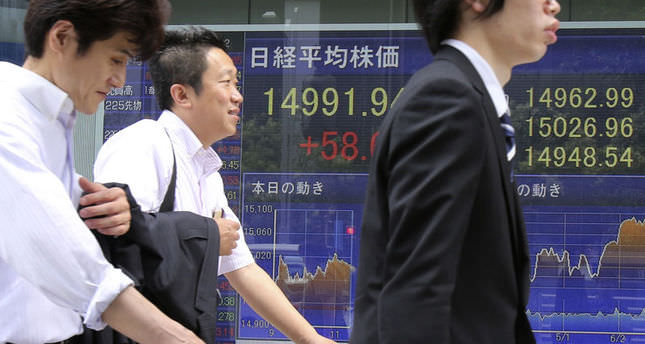 by Jun 17, 2014 12:00 am
Most Asian stock markets fell on Tuesday as the deepening conflict in Iraq and a gas dispute between Ukraine and Russia sapped investors' appetite for riskier assets.

MSCI's broadest index of Asia-Pacific shares outside Japan shed 0.3 percent. Japan's Nikkei bucked the trend with rise of a 0.3 percent, though it was still down on the week so far.

European shares were expected to rise, buoyed by merger activity, with Germany's DAX and France's CAC 40 seen gaining up to 0.3 percent, after Wall Street shares eked out small gains.

Oil prices remained not far from nine-month highs after militants from the Islamic State of Iraq and the Levant seized a large swathe of northern Iraq and threatened to capture a key oil refinery.

The insurgent advance forced Washington to not only consider options for military action but also hold brief talks with Iran, its long-time foe, to support the besieged government in Baghdad.

Although hopes of more support for Baghdad helped U.S. crude futures edge down 0.3 percent to $106.54 per barrel, investors remain wary of potential disruptions to oil exports.

"The advance of extremists to Baghdad or bombing by U.S forces will be a trigger a rise in U.S. oil prices above $110. That would be a burden for the world economy in the near term," said Daisuke Uno, chief strategist at Sumitomo Mitsui Banking Corp.

Higher energy costs are likely to curb growth in oil-importing economies, with the Indian rupee already falling victim to worries over rising inflation and a deterioration in the balance of payments.

The rupee dropped to seven-week low of 60.51 to the dollar, having fallen more than 2 percent in the past three sessions, at which point the Indian central bank started buying the rupee to stem its fall.

Tension in Ukraine showed no sign of abating as Russia cut off gas to Ukraine on Monday in a dispute over unpaid bills that could disrupt supplies to the rest of Europe and set back hopes for peace between the former Soviet neighbours.

The immediate focus is on the Federal Reserve's monetary policy statement on Wednesday, when the U.S. central bank is expected to announce it will continue paring its bond purchase programme.

The Aussie dipped 0.4 percent to $0.9361 as the minutes showed the Reserve Bank of Australia was not sure the current stimulus would be enough to offset a drag from falling mining investment and government belt-tightening.

The British pound held near a five-year high hit on Monday, maintaining momentum after Bank of England chief Mark Carney surprised markets last Thursday by suggesting the Bank of England may tighten its policy before year-end.

The pound stood at $1.6975, near Monday's high of $1.7011, with close attention falling on consumer inflation data due later in the day given the focus on the BoE's policy.

Elsewhere, Argentina's Merval index fell 10.1 percent on Monday after the U.S. Supreme Court declined to hear the country's appeal over its battle with hedge funds that refused to take part in its debt restructurings.

The move risks sending Argentina into a fresh sovereign default.