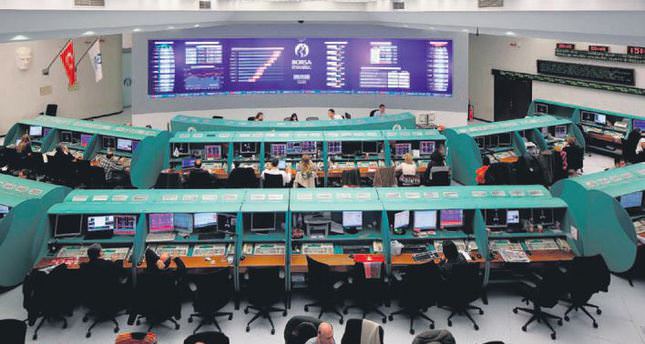 by AA Jun 30, 2014 12:00 am
The Borsa Istanbul 100 Index (BIST 100) is facing a challenging month in order to continue the rising trend observed in Ramadan during previous years.

When the last five years' performance of the BIST 100 index are examined for the month of Ramadan, it can be seen that the index has increased by approximately 4.3 percent in the last four years except for 2011. In 2011's Ramadan, due to the debt crisis in Europe, the BIST 100 Index decreased by 13.4 percent, while it increased by 2.7 percent in 2013's Ramadan. The BIST Food and Beverage sector index, which are calculated based on the increase and decrease observed in the shares of food and beverage companies, are at the top of the agenda during Ramadan,
vary within the last five years.

While the index decreased by 5.3 percent in 2009 and by 13.9 percent in 2011, it increased approximately 4.75 percent in 2010, 2012 and 2013. The tourism sector index, which is calculated based on the shares and stocks of companies active in the tourism sector, has depreciated by approximately 4.78 percent during Ramadan months in the last five years. On the other hand, it does not show much fluctuation for the month of Ramadan with an average increase of 0.5 percent in the last five years, with a 0.73 percent decrease last year.

Işık Ökte from TEB Investment/BNP Paribas Strategies stated that the assumption that "trading volume decreases during Ramadan" is not valid for four of the last seven years in an interview with Anadolu Agency (AA).

The month of Ramadan varies each year according to the Islamic calendar, and it fell in the months of September and October in 2007, 2008 and 2009. "During these months, the markets and the stock exchange are not closed, and everyone is back from their holidays and back at business. Therefore, during those three years, the trading volume even exceeded the monthly average during Ramadan," said Ökte. She further noted that the decrease observed in the trading volume in 2010, 2012 and 2013 was due to Ramadan being in summer months. "We might experience a fall in the trading volume this year as well, but this is only due to Ramadan falling in the two months when most people choose to take their holidays."

The Manager of ALB Security Research, Yeliz Karabulut, also noted that when the last 10 year's stock exchange performances throughout the month of Ramadan are observed, the rates vary, and the main reason thereof is the month of Ramadan falling 10 days before the time it did the previous year.

Karabulut further noted that in 2007, Ramadan fell in September, which is a month where the stock exchange usually shows a rising trend. "While the month of Ramadan doesn't have a seasonal effect, some sectors, mainly the retail sector, are affected. In this respect, stocks showing a rising trend that are backed by high equity capital are usually preferred by investors," added Karabulut.

Data announced by the U.S. recently has also had an effect, especially on the national currencies of developing countries and their stock exchanges. Karabulut also underlined that since the U.K. and the U.S. are both expected to increase interest rates, interest rates in Turkey might also trigger an increase in the month of July. "Therefore, following U.S. data and the speeches of FED members are a must," said Karabulut who stated that if other announcements on interest rate increases are made, this may have a heavy selling pressure on developing economies.
RELATED TOPICS