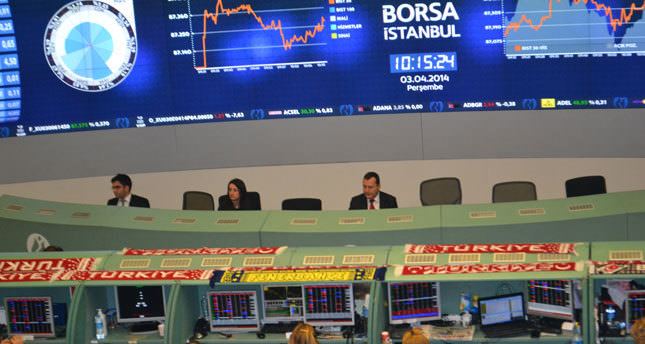 by Daily Sabah Aug 12, 2014 12:00 am
Markets on Monday opened with appreciating TL and a 2.15 percent rise in the Istanbul Stock Exchange. Experts believe Erdoğan's victory in Sunday's presidential election was seen as a sign of continued stability by the international markets, with most expecting a smooth political transition in the near future.

The markets, which were in turmoil due to geopolitical developments, the pressure of Moody's rating agency and the tension of the presidential election, are expected to improve as a result of the political stability experienced after the election. With the announcement of the temporary results of the election, the TL appreciated against the U.S. dollar in the international exchange market. The dollar/lira exchange parity which was around 2.19 on Friday dropped down to 2.15 on Sunday night. Experts expect the lira to remain powerful against the dollar this week and the stock exchange, which increased by approximately 1.5 percent on average, and 6.14 percent on a weekly basis during the past election periods is also expected to continue the same trend, provided that no geopolitical risks arise and that Moody's does not make any adverse announcements regarding Turkey's economy. Gedik Yatırım's Domestic Sales Manager Eral Karayazıcı noted that the election results, which are yet to be finalized, have had a positive effect on markets, however the question about who will become the new prime minister will still be pressurizing. Stating that at this point the plusses and minuses will balance each other out, Karayazıcı added that the stock exchange market may target the 82,000 level and that the dollar/ lira exchange rate would decrease down to 2.09-2.10 level.

Integral Menkul Değerler's Research Manager Egemen Candır also said that an increase up to the 81,000 level is possible in the stock exchange market but in order to achieve a more stable increase, a positive evaluation from Moody's is required. Candır further noted that he expects interest rates to remain in the 8.58-8.90 percent range. ALB Menkul Değerler's Research Manager Yeliz Karabulut noted that if the current price of gold, which is around $1,305 per ounce, is at a crucial level and if it increased above that level it may climb up to $1,320.
Last Update: Aug 12, 2014 12:28 pm
RELATED TOPICS