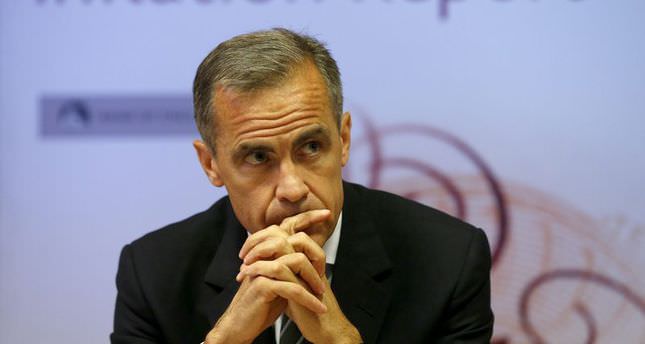 by Sep 10, 2014 12:00 am
The Bank of England (BoE) might start to raise interest rates next spring although the labour market is still in the process of recovering from the financial crisis, Governor Mark Carney said on Tuesday. Carney pointed to last month's BoE forecasts which showed that if rates started to rise when markets predict, in the spring of 2015, inflation would be on course to settle close to the Bank's 2 percent target in three years' time.
At which point, "we would achieve our mandate", he said. "With many of the conditions for the economy to normalise now met, the point at which interest rates also begin to normalise is getting closer," Carney said in a speech to representatives of trade unions.

But he stressed there was no timetable for rate hikes. "We have no pre-set course, however; the timing will depend on the data," he said in the speech.

Sterling rose and British government bond prices fell. Carney said the pace of wage growth in Britain had been very weak - it actually fell in year-on-year terms in the most recent reading. But this reflected how the country had seen a surge in people seeking work, and there were signs that wages could pick up modestly in the coming months, Carney added.

The Bank of England would watch closely how pay settlements turn out at the turn of the year and "take a steer" from growth in starting salaries for people starting new jobs, he said. This would be consistent with most economists' expectations that the BoE will not raise interest rates before February, despite the fact that two of the BoE's nine policymakers voted for a rate rise in August.

The BoE put wage growth more explicitly at the centre of its thinking on when to raise interest rates last month. Carney reiterated the view of the BoE's policymakers that the amount of slack in the labour market was equivalent to around 1 percent of Britain's economic output.