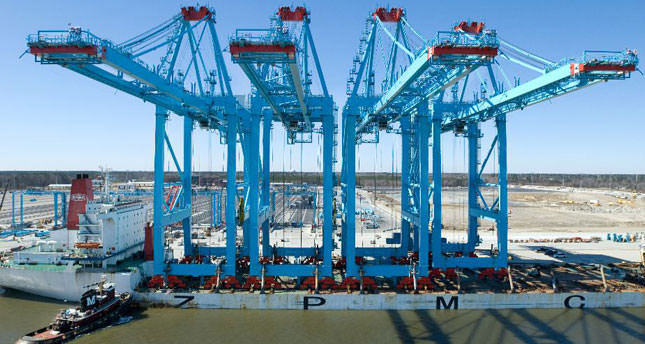 Turkish exports increased by 6.5 percent last month compared to September 2013, the largest September rise since 1923, the Turkish Exporters' Assembly (TİM) announced. Exports totaled $13.3 billion (TL 30.3 billion), the assembly (TİM), announced on Wednesday, as the economic recovery in Europe continued. Speaking in the eastern province of Ağrı, TİM President Mehmet Büyükekşi said: "Turkey has achieved a positive atmosphere in the EU and is still progressing. The country's exports to the bloc increased by 13 percent in 2014. Over the first seven months, global exports from 70 countries increased by 2.8 percent, while Turkey achieved an increase of 6.1 percent - more than twice the world average. Therefore, Turkey is hopeful for the rest of the year." The demand for the dollar is increasing worldwide after the Fed's decision to hike interest rates.

CONTINUED FROM PAGE ONE-

As exporters, we want a stable exchange rate instead of a high rate," he added. For the first nine months of 2014, exports increased by 5 percent in comparison with the same period of 2013, totaling $118.2 billion, according to Büyükekşi.

Exports to Germany rose 13 percent year-on-year, and the automobile industry alone registered $1.9 billion in exports for September. Exports to neighboring Iraq fell by 14 percent in September, TİM declared, as recent turmoil in the country hampered exports. According to TİM's figures for August, Iraq has dropped from second to fifth place among Turkey's top export markets.

Speaking to Daily Sabah, Istanbul University's Dr. Dündar Demiröz said that the figure regarding exports in September should not surprise the business circle. "Turkey has diversified its export markets in the last decade. During the recession in the European economies in 2008 and 2009, Turkish exporters focused on Middle Eastern markets and now, exporters gear up to expand their market in EU countries when regional crises started to impede business in Middle Eastern countries. This diversity shows that Turkish productions are easily marketable and have no demand problems," Demiröz said.

He added that Turkey's private sector is dynamic and can adjust its position in line with global and regional political and economic factors. "The increase in the ratio of industrial productions to total exports indicates Turkey is becoming a country that exports high-value-added products, which is quite pleasing," the economist told Daily Sabah. Commenting on the export figures, Science, Industry and Technology Minister Fikri Işık highlighted that industrial exports increased by 7.7 percent in September. "We appreciate the contribution of industrial production and exports to growth rate. The increase in industrial production brings more employment. We, as the government, prioritize raising the weight of the manufacturing sector in gross domestic production," the minister said.

Turkey is the 16th-largest economy in the world, according to last year's GDP figures, and its major markets include Germany, Iraq, the U.K., Russia and Italy. Union of Chambers and Commodities Exchanges of Turkey President Rifat Hisarcıklıoğlu said Turkish companies had faced problems in Iraq. Hisarcıklıoğlu said: "The country had become the most important trading partner after Germany. However, recent developments in Iraq have negatively affected our economic relations. Turkish exports have declined 40 percent since June."

Economy Minister Nihat Zeybekci said in July that the continuing decline in Turkish exports to Iraq would create a $2.5 billion loss by the end of 2014. Iraq has faced violence and political turmoil since ISIS seized large areas of the country in June. An increase in exports is crucial for fixing Turkey's economy long term.

The Turkish economy has been recovering with a rise in exports of almost 6 percent over the last nine-month period, thanks to improvements in the Eurozone - Turkey's biggest trading partner.