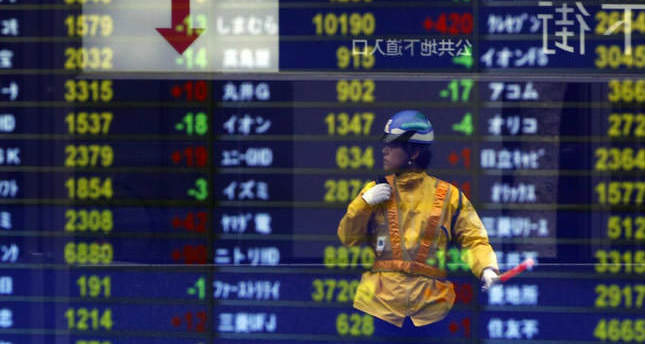 by Oct 03, 2014 12:00 am
A mishap on the Tokyo Stock Exchange resulted in a trading error that nearly caused $617 billion (TL 1.4 trillion) in unintentional trades in some of Japan's biggest companies. Once the mistake was discovered the stock orders were cancelled. Dozens of trillions of yen in stock orders were placed, and then cancelled at 9:25 a.m. Tokyo time, according to an official at the Japan Securities Dealers Association (JDSA). Shares in 42 companies, including car makers Toyota and Honda, Japan's biggest bank Mitsubishi UFJ, and imaging company Canon were almost affected by the glitch. Nearly 57 percent of Toyota's stock, 1.96 billion shares, was accidenta lly placed. The $116 billion trade was cancelled before it was completed, according to an association official. "I've never heard of orders this big being cancelled before, although we haven't put together specific reports on previously cancelled orders," the JSDA official said. The blunder was first noticed early in the trading hours when the industry regulator said it received a report about an error.

"It's not rocket science that there was a fat finger here, but it reopens the question about accountability," Gavin Parry, managing director at Hong Kong-based brokerage Parry International Trading, told Bloomberg News. "Fat finger" is a slang term for a trading error that occurs when the incorrect transactions are placed due to a typographical error. "There is a probability a broker mistook the number of shares for the value of the shares. We guess that's why the OTC market sees big crosses - it's easier to cancel errors," Parry said. Fat-fingering isn't that uncommon. In 2005, during the initial public offer of J-COM, a trader accidentally typed an order to sell 600,000 shares at 1 yen when he meant to sell 1 share at 600,000 yen. The trader's company didn't catch the typo in time which resulted in a $347 million loss, split between the exchange and the trader's company, Mizuho.