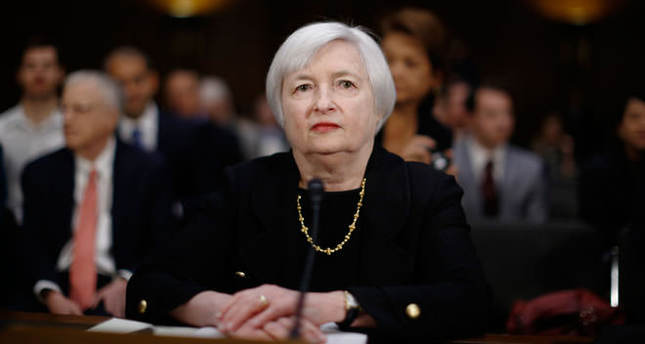 World stock markets roared their approval on Thursday from reassurances that the U.S. Federal Reserve will not rush into raising interest rates, with risk appetite flooding back into almost every asset class

The dollar jolted lower, while oil and commodity prices rose. Bond yields in large parts of Europe, which have plunged during years of cheap funding from the Fed and the world's other major central banks, hit new record lows. Minutes of the Fed's Sept. 16-17 meeting published late on Wednesday showed officials were wary about the dual threats of a stronger dollar and recent wobbles in the world economy as they seek an eventual exit from record low rates.

There were big gains on Wall Street and for Asia stocks, and European shares duly followed suit as Britain's FTSE 100, Germany's DAX and France's CAC 40 rose 0.7, 1.2 and 0.8 percent respectively in early trading.

"It (the Fed's message) has stabilised risk appetite and it was well needed following the macro economic disappointments we have had recently," said Hans Peterson, global head of asset allocation at SEB investment management. "It is a burning issue, the pace of U.S. interest rate rises. They will tighten of course, but it will probably be very slow."

Spanish and Belgian bond yields hit record lows and German Bunds edged towards them in a broad-based euro zone debt rally, while many emerging market bonds and currencies jumped.

MSCI's broadest index of Asia-Pacific shares outside Japan, which touched its lowest level since March in the previous session, was up about 1.2 percent in late trade. Japan's Nikkei share average skidded 0.8 percent, however, as the yen rose against the weakened dollar.

"Fed officials have concerns on the impact of a strong dollar, which undermines the scenario held by some that Japanese shares will benefit from further strength in the dollar against the yen," said Masayuki Doshida, senior market analyst in Tokyo for Rakuten Securities.

European shares bounced back on Thursday from the previous session's two-month lows on expectations the U.S. Federal Reserve will not start hiking interest rates until the economy is strong enough to absorb the move.

The Fed expressed concern the rising dollar could slow a needed rebound in inflation and highlighted economic turmoil in Europe and Asia, another factor behind its stance towards keeping an accommodative policy for the near future.

"Overall the Fed still seems to be very cautious and that might lend some support to equity markets. It has to sharpen its forward guidance in the next policy meeting, given the problems that we still see in the global economy," Gerhard Schwarz, head of equity strategy at Baader Bank in Munich, said.