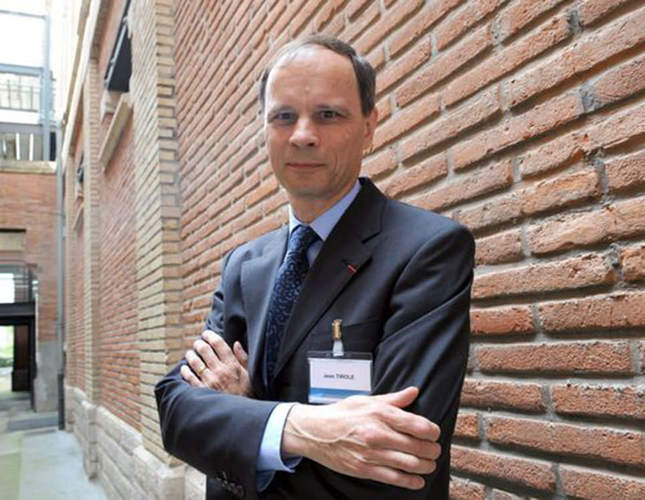 by Anadolu Agency Oct 13, 2014 12:00 am
French economist Jean Tirole won the Nobel prize for economics Monday for research on market power and regulation.

The Royal Swedish Academy of Sciences cited Tirole for clarifying "how to understand and regulate industries with a few powerful firms."

Tirole, 61, works at the Toulouse School of Economics in France and has a Ph.D. from Massachusetts Institute of Technology.

"From the mid-1980s and onwards, Jean Tirole has breathed new life into research on such market failures," the academy said, adding his work has strong bearing on how governments deal with mergers or cartels and how they should regulate monopolies.

"In a series of articles and books, Jean Tirole has presented a general framework for designing such policies and applied it to a number of industries, ranging from telecommunications to banking," the academy said.

It was the first economics prize without an American winner since 1999.

"I'm so moved," Tirole said, speaking to a news conference in Stockholm on a telephone link from Toulouse.

Before Tirole, the academy said, policy-makers advocated simple rules including capping prices for companies with a monopoly and banning cooperation between competitors. Tirole showed that in some circumstances, such rules can do more harm than good.

Drawing on insights based on Tirole's work, "governments can better encourage powerful firms to become more productive and, at the same time, prevent them from harming competitors and customers," the academy said.

The economics prize completed the 2014 Nobel Prize announcements. Last week, different panels of Nobel judges announced the awards for medicine, physics, chemistry, literature and the Nobel Peace Prize. The awards will be presented on Dec. 10, the anniversary of prize founder Alfred Nobel's death in 1896.

Even though the economics award is not an original Nobel Prize it was added in 1968 by Sweden's central bank it is presented with the others and carries the same prize money.

Last year the economics prize went to three Americans who shed light on the forces that move stock, bond and home prices.

The economist will receive an 8 million Swedish crown ($1.1 million) prize.

The economics prize, officially called the Sveriges Riksbank Prize in Economic Sciences in Memory of Alfred Nobel, was established in 1968. It was not part of the original group of awards set out in dynamite tycoon Nobel's 1895 will. (1 US dollar = 7.1780 Swedish crown)