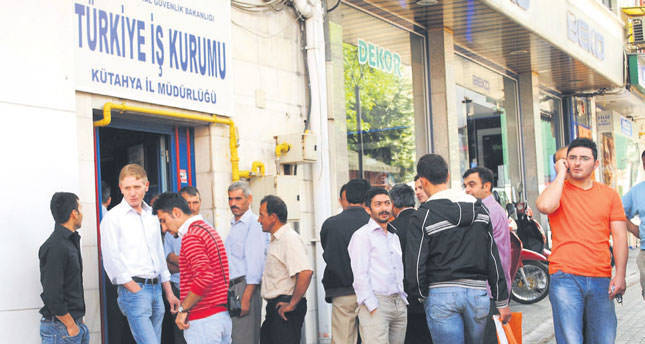 The Turkish Statistical Institute (TurkStat) announced a moderate 0.7 percent increase in the unemployment rate from June to July yesterday, continuing to outpace end-of-year government estimates, which appear to be less concrete at a time of volatile regional and global economic change.

TurkStat revealed yesterday that 2.867 million people aged 15 years and over in the country were jobless during the month of July 2014. "The unemployment rate was realized as 9.8 percent [...] 8.8 percent for males and 12 percent for females," TurkStat said in a press release Wednesday.

The number of unemployed in the country has gradually swelled since last year, up 0.5 percent since the same month last year, with youth unemployment - the 15 to 24 age group - also edging up by 0.2 percent from 18 percent over the year, according to TurkStat.

Turkey fared better than its European neighbors who struggled with an 11.5 percent seasonally-adjusted unemployment rate for two straight months - July and August - with youth unemployment at 21.7 percent in the 28-member bloc and 23.2 percent in the eurozone. This was in fact good news for Europe compared to 23.6 percent and 24 percent respectively for the same month in 2013. "This is the lowest rate for the EU28 since September 2011 and for the euro area since June 2012," Eurostat said in an announcement.

In a press conference on Oct. 8, Turkey's Deputy Prime Minister Ali Babacan announced the government's Medium Term Program (MTP) for the 2015-2017 period citing a 9.6 percent unemployment rate estimate for year-end 2014 to decrease by a further 0.5 percent by 2017.

Babacan further stated that 1.2 million jobs have been created over the last six years, citing that the country's growth is creating employment opportunities that have drastically accelerated over the past six years.

Although it is difficult to assess the exact composition of the Turkish labor market and whether the government will meet its target due to the large amount of informally employed labor, which has showed massive improvement contracting from 48.2 percent in 2005 to 36.8 percent in 2013, formal labor figures are sure to be volatile in the coming months amid massive refugee influxes from Iraq and Syria fleeing their embattled countries. The Disaster and Emergency Management Agency (AFAD) of Turkey announced on July 24, 2014, "The total number of Syrians registered and assisted in 22 camps located in 10 provinces was 218,731," while the U.N. High Commissioner for Refugees (UNHCR) stated there were approximately 869,500 registered Syrian refugees in all of Turkey.

Minister of Labor Faruk Çelik, in an announcement on Oct. 8 also, stated that all refugees coming from Syria will be admitted according to the Immigration Act that was passed by the Grand National Assembly of Turkey recently. Çelik also added that under the auspices of the act, Syrians living outside the camps will be assimilated into the labor market. "In this respect, all our guests from Syria will receive identity cards and will be placed in suitable open employment positions if possible," Çelik said. In addition to the uncertain impact refugees will have on the Turkish labor market, it is also unsure as to how the import and export labor markets will be affected by the sliding value of the lira and the euro against the dollar, which has had a trade-weighted rise of 4.1 percent since June this year, and whose value is also uncertain as recent bull market gains begin to wane on the back of lower-than-expected growth.