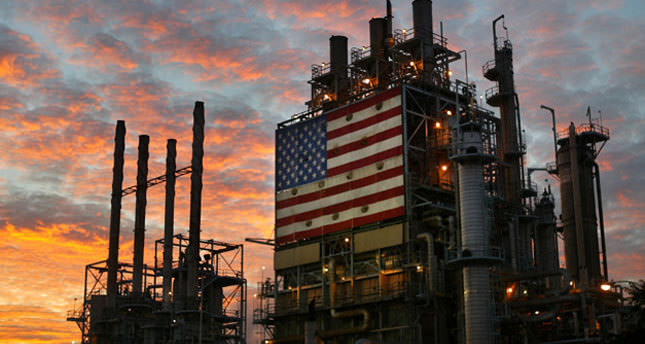 Propelled by surging shale output, the United States is fighting for supremacy in the global oil market even as a pullback in crude prices threatens to challenge the boom. It is also rethinking its ban on oil exports

The U.S., which only a few years ago seemed to be in the midst of an inexorable decline in domestic petroleum production, may have already overtaken other petroleum giants. In terms of crude alone, the U.S. pumped 8.8 million barrels a day in September, behind Saudi Arabia's 9.7 million and Russia's 10.6 million barrels, according to official sources. But when liquefied natural gas is included, the U.S. extracted 11.5 million barrels in August - essentially level with OPEC kingpin Saudi Arabia - according to data from the International Energy Agency (IEA). Regardless of whether it is at or near the top of the global petroleum pecking order, the U.S. is rethinking its decades-old ban on oil exports in light of the boom as energy emerges as an increasingly important foundation of the U.S. economy. At the same time, the U.S. boom "has been changing the worldwide market. It's the thing that has put pressure on OPEC," said James Williams, energy economist for WTRG Economics.

The pace of growth has been staggering, with U.S. output rising nearly 60 percent since its low in 2008. During previous booms, the U.S. added one million barrels per day of output over the course of a decade. "Today we're growing supplies by one million barrels every year. This is by far the biggest and fastest expansion in U.S. oil production in history," said Francisco Blanch, head of commodity research at Bank of America Merrill Lynch.

The boom in U.S. oil output has sharply cut the amount of crude the U.S. imports from leading petroleum producers, freeing up more oil for overseas markets and sometimes even putting pressure on prices. For instance, in July, the U.S. imported no oil from OPEC member Nigeria for the first time since 1973. "There's no reason for it now, because we have more light oil from Bakken, Eagle Ford and the Permian Basin. We have too much light oil," Williams said.

The boom has also spawned calls from oil industry players to ease the U.S. embargo on crude exports, which has been in place since the 1970s oil shocks. Some manufacturers also endorse the move. A report Tuesday by the Aspen Institute said lifting the ban would boost durable goods production by some $8 billion (TL 18.1 billion) by 2017, in part, due to increased sales of mining and construction equipment. Even as the crude exports ban remains in place, U.S. regulators have shown leniency in allowing more oil-based exports. Exports of diesel and other petroleum products have soared over the last five years. U.S. oil exports reached 420,000 barrels a day in early October, the highest level since 1957. These gains have come from shipments of minimally refined oil. Some companies are also building special refineries to permit such exports. Consultancy Wood Mackenzie predicted "incremental policy changes" to U.S. trade practices rather than "a material change in the overall export policy." The IEA has projected that U.S. oil production will continue to increase through 2020, but will level off soon thereafter. However, continued growth depends heavily on commodity prices, and U.S. output could suffer disproportionately from a big retreat in prices. Surging U.S. production has been a major factor in the 20 percent decline in oil prices since June, even though political tensions have remained high through many parts of the oil-rich Middle East and North Africa region. On Tuesday, U.S. oil prices sank nearly five percent to $81.84 a barrel, the lowest price since June 2012. Analysts note that high expenses for key shale technologies like horizontal drilling and hydraulic fracturing, or fracking, mean the cost of production in major shale plays stand at three to four times the level in the Middle East. "If crude oil prices continue to drop, it won't be economical to produce oil out of the Bakken and Eagle Ford. If they were to drop another $10 or $15 a barrel, our production growth would come to a stop," Williams said.