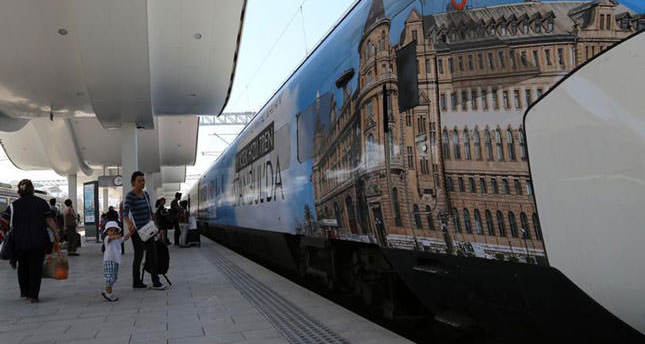 by Daily Sabah Oct 18, 2014 12:00 am
The 2015 budget bill, which was approved by Parliament General Assembly last week, is built around 14 main targets from the fight against inflation to savings. While public investments for next year have been set at TL 88.5 billion ($39.3 billion), investment expenditures have increased by 11 percent, a rise from TL 36.7 billion to TL 41 billion. There won't be any expenditures outside the pre-determined projects and the liability undertaken by the Treasury will not exceed $3 billion (TL 6.75 billion). The 2015 Centralized Administration Draft Law prepared by the Ministry of Finance has been submitted to the Parliament speaker.

The total value of the budget proposed was TL 473 billion and the main targets in the proposal were "the fight against inflation, reduction of the current account deficit, maintaining high growth rates, increasing savings, minimizing the effects of instability in the global economy, fiscal policies with measures against exogenous shocks, achieving income, expenses, middle-term financial targets, establishing resource-expenditure balance, elimination of unproductive expenses, allocating more resources for incentives and research and development, efficiency in social programs, qualified infrastructure investments, efficiency in agricultural support and financial transparency."

According to the proposal no expenses will be spent on any projects that are not included in the additional investment tables of the 2015 investment program. To implement the projects included in these tables and other works within the scope of the projects for which an allowance has been paid as a lump sum according to the related years, project allowance cannot be less than 10 percent of the total project cost. The projects include dam and hydroelectric power plants with an installed power of 500 megawatts, improvement project of the Gebze-Haydarpaşa and Sirkeci-Halkalı suburban lines and construction of the Railway Bosporus Tube Tunnel Project, inner-city rail transport systems and subway construction projects along with other railway and tractive stock projects to be assumed by the Ministry of Transport, Maritime and Communication are not subject to this restriction. The limit for guaranteed facilities and foreign debt loans has been set at $3 billion.

Accordingly, the limit for loans undertaken within a year will not exceed the debt undertaking limit determined as $3 billion, which will be provided by the Undersecretariat of the Treasury for 2015 according to the regulations of the budget code that will enter into force.

The highest budget increase after the Presidential Palace was in the budget of the Ministry of Development. The ministry's budget increased from TL 971 million to TL 1.9 billion. Tax income is projected to increase by 10.7 percent from TL 351.6 billion to TL 389.5 billion. This figure does not include restructuring expectations.

High-speed rail projects will also be prioritized in order to start carrying passengers over the core network consisting of the Istanbul-Ankara-Sivas, Ankara-Afyonkarahisar-İzmir and Istanbul-Eskişehir-Antalya corridors, with Ankara as the central point. Further, signalization and electrification investments, logistic center investments and secondary line building and similar projects for increasing freight trains will have top priority. Minister of Finance Mehmet Şimşek noted that there was no increase in defense expenses or any kind of weaponry, tool and equipment purchases and other expenses for defense and NATO infrastructure investments in accordance with the strategic targets of the Turkish Armed Forces that will be met by the resources of the Defense Industry Support Fund and other allowances included in the budget. The Defense Fund has resources equal to TL 5.7 billion.