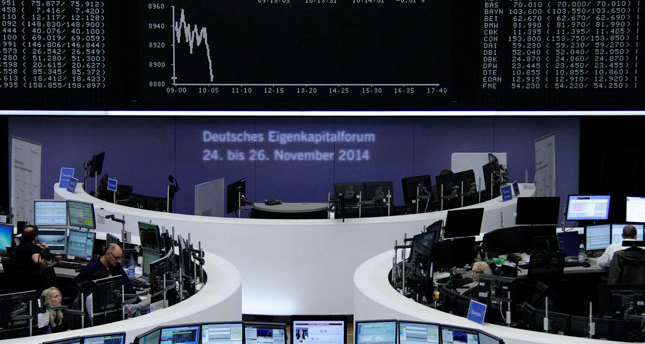 European and U.S. markets stabilized after a tumultuous week upon receiving guarantees of central bank intervention in the event of further economic slowdowns. Japanese markets benefited from the yen's slide against the strengthening dollar while also riding the positive gains on Wall Street yesterday.

The S&P 500 index rose another 2 percent yesterday - after hitting a six-month-low a week earlier - building on a four-day rebound after positive corporate earnings and speculation that the Federal Reserve will step in with further stimulus in the event of continued slow growth - which was upwardly revised by the IMF to 2.2 percent early this month. The Stoxx Europe 600 Index increased 0.2 percent finishing up at 323.55 midday yesterday in London, after earlier gains of 0.3 percent and a fall of 0.5 percent during previous trading periods. The FTSE Eurofirst 300 slumped 0.2 percent on the back of falls in the tobacco sector after British American Tabacco Plc said cigarette shipments had fell further for the January-September period.

Much of the positive activity in European markets seems to be inspired by the European Central Bank's second day of covered bonds purchases with Reuters reporting the bank will possibly buy, as early as 2015, riskier corporate bonds on the secondary market in attempts to galvanize the market and stave off deflation. "The ECB buying bonds is just speculation, but investors are thinking there's no smoke without fire, so the sentiment is better," Christian Stocker, a strategist at UniCredit Bank AG in Munich, told Bloomberg.

"The general takeaway here for a lot of people is that it shows commitment from the ECB trying to find ways to expand its balance sheet. And also it shows ... the ECB wanting to pick up the pace," Paul Robson, a currency strategist at RBS, told Reuters News Agency.

The late Tuesday reports on bond purchases pushed down the euro against the dollar and the yen however, according to National Australia Bank note: "The slippage in the euro-dollar rate was exacerbated by comments from German Finance Minister Wolfgang Schaeuble that a lower euro exchange rate helps the (German) economy."

Elsewhere, Tokyo stocks surged upward by 2.64 percent adding 391.49 points to finish at 15,195.77 on Wednesday a day after a 2.03 percent fall in the Nikkei 225 index. Shares on the wider-ranging Topix index also rose 2.58 percent, or 31.05 points, closing up at 1,236.41. CLSA equity strategist Nicholas Smith told Dow Jones Newswires: "Now that the 'panic attacks' of the last several days are beginning to subside, we should see something of a recovery for the Tokyo market."

"The government and Bank of Japan (BoJ) have assumed that the domestic economy may be weak due to the consumption tax rise, but that it would be offset by foreign demand," Takeshi Minami, an economist at Norinchukin Research Institute, told AFP.

The disappointing figures released on Wednesday have reignited speculation that the BoJ will be expanding their stimulus measures in efforts to try and weaken the yen against other currencies to aid exports. This has partially worked, with the yen receding from 106.56 to 106.90 in the last two days alone however, according to data this has not translated into resurgence for exports even with September's figures beating economists' expectations of 6.5 percent by 0.4 percent.