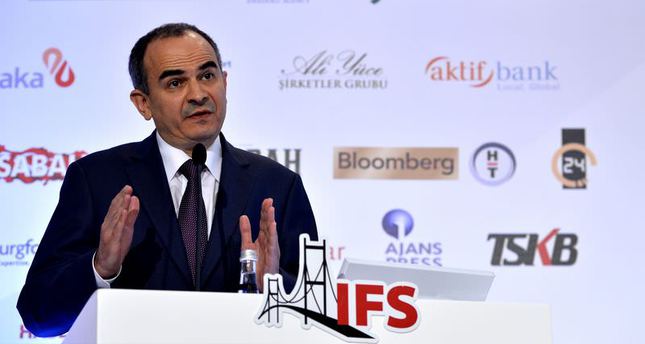 by Şeyma Eraz Oct 24, 2014 12:00 am
The Monetary Policy Committee (PPK) of the Central Bank of the Republic of Turkey (CBRT) yesterday decided to keep the one-week repo interest rate at 8.25 percent, ignoring concerns about the negative effects on real sector investments. According to an announcement by the CBRT, the PPK, the bank's main decision-making board, convened and CBRT Governor Erdem Başçı, presided over the meeting. The board decided not to alter the one-week repo interest rate, the interest rates applied in the interbank monetary markets and the interest rate applied on the Borsa Istanbul Repo Reverse Repo market.

The PPK kept the overnight marginal funding rate at 11.25 percent, borrowing facilities provided for primary dealers via repo transactions at 10.75 percent and the borrowing rate of interest of the central bank at 7.5 percent along with the one-week repo interest rate. According to the late liquidity window, the borrowing rate of interest for the TCMB, which is applied between 16:00-17:00 in the Interbank Monetary Market, was also unchanged at zero percent and the lending interest rate, which was 12.75 percent, was also kept steady. The announcement further stated, as a result of the tight monetary policy stance and with macro-precautionary measures being applied, the credit growth rate is at acceptable levels and despite the decline in the global demand exports are supporting balanced growth. Speaking to Daily Sabah, economist and president of Nişantaşı University Dr. Kerem Alkin said, "The capital adequacy and financial structure of the banking sector are important for supporting growth and also for making sure that Turkey's credit note awarded by international credit rating agencies remains at the same level. Therefore, we are observing important work to preserve the current conditions in the Turkish economy. If we list these one by one, decreasing export or investment costs is one of the most important measures, which the central bank of Turkey also supports. The central bank is trying to maintain a strong financial structure in the banking sector by implementing the payment of interest on the required reserves kept in TL and is also planning on encouraging banks to offer better and easier credit facilities to the real sector."