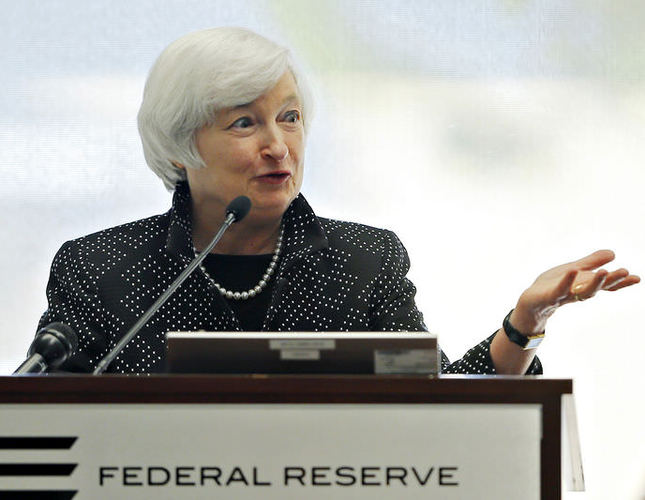 by Oct 27, 2014 12:00 am
The U.S. Federal Reserve is likely to make a final push into the post-crisis era this week with a decision to finally wind up its six-year-old economic stimulus operations. A few worrisome clouds over the global economy might be expected to give Fed Chair Janet Yellen's Federal Open Market Committee pause when they meet on Tuesday and Wednesday. But after repeatedly signaling the end this month of the bond-buying program known as quantitative easing, the Fed is unlikely to change course, analysts say.

The Fed is currently adding $15 billion in cheap funds to the economy per month under QE, down from $85 billion last December. Injecting tens of billions of dollars each month into the economy to repress longer-term interest rates has had less and less real impact, while generating what some worry are fresh bubbles in stock markets. And despite deflation worries in Europe and a surge of concern over the global economy generally, QE3 - the third edition of the operations - has already been tapered to the point that continuing would be symbolic.

However, there is still a chance that the FOMC might hold off. Last week, James Bullard, head of the Fed's St. Louis branch and a former FOMC member, said QE should continue until the data is clearer. U.S. inflation expectations are dropping, Bullard told Bloomberg TV. He said: "And that is something that a central bank cannot abide ... We could go on pause on the taper at this juncture and wait until we see how the data shakes out into December." But analysts point out that the Fed does not act on one or two months' data, but looks at the trend, which has been steady if modest improvement in the U.S. economy. "The decline in the inflation expectations will undoubtedly take the center stage of FOMC discussions," said economists at BBVA in a client note. "At the same time, the focus of the committee's discussion is expected to progress beyond the timing to end QE3." More important, they said, is what the FOMC says about the next phase of policy: the initial increase in the benchmark fed funds interest rate, which has been held at zero since the end of 2008. Right now that is not expected until mid-2015. But any change in FOMC guidance language could give a start to rate-sensitive markets. For the Fed the move signals the beginning of policy "normalization" after six years of a crisis stance.

In all, since 2008, the Fed has pumped around $3.5 trillion of easy money into the economy through QE operations, buying Treasury and mortgage securities to push down long-term interest rates to encourage investment and spending. That was achieved, but with limited impact in part because while the Fed injected cash into the system, the government has slashed spending for the past three years. One clear result though has been to re-inflate the value of stocks, property and other assets that collapsed during the crisis. Now U.S. stocks have soared to record levels, sparking recent calls for caution, including from the International Monetary Fund, that QE operations have overheated markets. But at the same time, the IMF and others have warned the Fed to be extremely careful gearing down for the turbulence that could come with rising interest rates around the world. Despite Bullard's view, said Chris Low of FTN Financial, "We expect the committee will stick to its guns and shut the controversial program down after Wednesday's FOMC meeting." The end of QE technically will not amount to tightening. The Fed says it will not sell off the assets, and for those maturing it will roll them over in the near term. The FOMC does not plan to begin reducing its balance sheet until after it raises interest rates. Last month, Yellen said it could "take to the end of the decade" for the Fed to get rid of the assets it bought under QE.