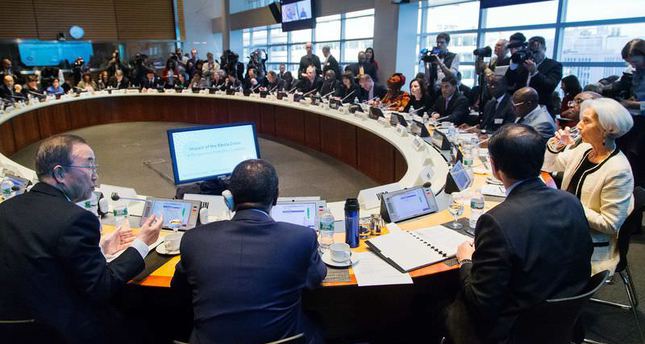 The IMF predicts sub-Saharan Africa's economy will expand by 5.1 percent this year and 5.8 percent in 2015 - the highest growth outside Asia - despite the heavy economic toll from the Ebola epidemic.

"The Americans are beginning to take a look, the whole world is looking, because it's the last big territory with a lot of opportunities for fast growth," said Hubert Segain, a partner at law firm Herbert Smith Freehills, at a recent conference.

This new appetite for African investments has driven a proliferation of stock exchanges across the continent, with countries such as Mozambique, Uganda and Tanzania setting up their own markets.

"In the 1990s, there were a dozen, today they have more than doubled," said Segain.

These markets offer African companies a means to access Western capital in a stable and transparent environment, governed by more defined rules than private investments.

The BRVM exchange based in Ivory Coast, which covers eight West African countries, already gets more than half of its volume from international investors, according to its chief executive. Western exchanges are also looking to get into the game, linking up with their African cousins and tempting companies to double-list.

Segain said more than 10 African companies, or those with assets on the continent, have debuted recently on the London Stock Exchange.

The exchange operator in March signed a cooperation deal with Algeria's stock exchange and agreed to provide Tunisia and three Middle Eastern exchanges with trading technology. But the potential for profits also comes with many challenges. Anthony Attia, chief executive of Euronext Paris, said "The first hurdle is seeing Africa as a single entity. It brings together very different geographical areas with varied levels of political and economic stability," said Attia. Another major problem is liquidity, as there are still only a limited number of players in Africa's financial markets.