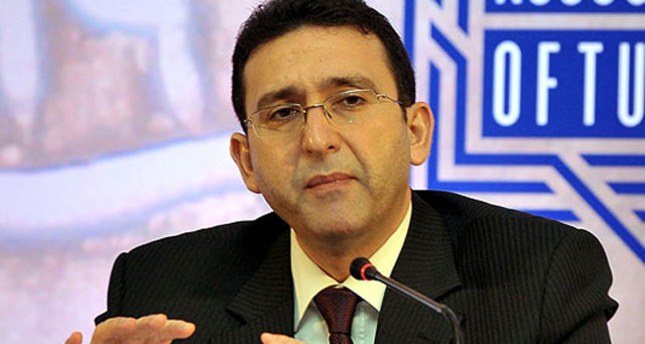 by Daily Sabah with AA
Nov 07, 2014 12:00 am
The chairman of Istanbul's Stock Exchange, İbrahim Turhan, has said that public offerings of debt instruments is increasing. He made the comments in response to questions from press members after the 11th Synergy Meeting held in Bursa by the Balkan and Rumelia Industry and Business Association (BALKANSİAD). "There has been an acceleration in public offerings of private sector bills and non-interest bearing notes, which are included in the debt instruments market," said Turhan.

He also announced for the first time that the Islamic Development Bank, of which the Turkish Treasury is also a shareholder, will be quoting non-interest bearing notes (sukuk) of $10 billion at Istanbul's Stock Exchange Market. "The Islamic Development Bank is an international financial institution, with its headquarters in Jeddah and was founded by the members of the Organization of Islamic Cooperation. It is an investment and development bank and has a credit note of '3A' and our deal with them has been approved by the Capital Market Board. These non-interest bearing notes will be bought and sold at the Istanbul Stock Exchange Market. This is a very important step for our country," Turhan said, underlining that this is the first time he has announced the news.

He also said that there has been a great increase in public offerings in the last quarter of this year and added that soon a major insurance company will be offered to the public, followed by an important bank due for a capital increase. "These are extremely high amounts and there are other public offerings that will be executed until the end of the year," Turhan said.

When a reporter brought up the fact that the U.S. Federal Reserve has stopped its monetary expansion, which is expected to have an adverse effect on developing countries, Turhan said that since such steps were expected, precautions have been taken and an increase in interest rates is anticipated in the second half of next year. He also underlined that certain monetary tightening policies have already been balanced with the decisions of the central banks of Europe and Japan.