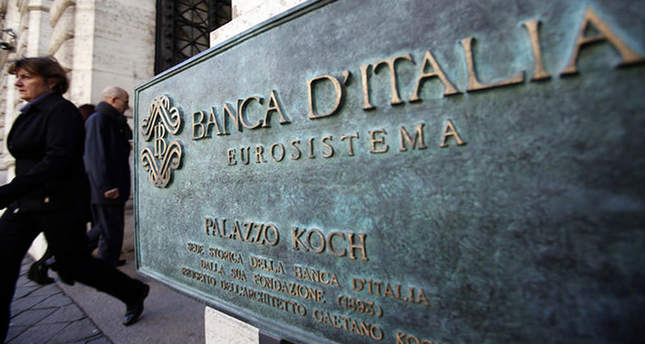 by reuters
Nov 14, 2014 12:00 am
A prolonged period of consumer price stagnation would significantly impair Italy's hopes of lowering its huge public debt, the Bank of Italy warned yesterday.

Italy's economy is shrinking and its inflation rate is close to zero, the central bank noted in its twice-yearly Financial Stability Report, making it difficult to reduce debt from its current record highs.

Italy's public debt, at a projected 132 percent of gross domestic product this year, is the highest in the euro zone after Greece.

"The speed of adjustment in the debt-to-GDP ratio will depend above all on trend of nominal GDP," the Bank of Italy said. Nominal GDP incorporates both economic activity and increases in prices, meaning that growth is harder to achieve if prices are stagnant.

Excessively low inflation is a threat to the economic stability of the whole euro zone, the central bank said, but "it has more serious effects if there is high debt ... with negative consequences for the solidity of public finances."

Italian EU-harmonised inflation stood at just 0.2 percent in October, below a euro zone average rate of 0.4 percent, having posted annual declines in August and September for the first time in half a century.

In a section of its 58-page report dedicated to the risks of too-low inflation, the bank calculated that, all else being equal, Italy's public debt would be at least 3 percentage points lower than currently projected in 2017 if inflation could be brought back up to near 2 percent.

With Italy still struggling to emerge from recession, bank credit to companies would probably contract again in 2015, the report said, though at a slower rate than this year.

On the other hand mortgages to households are expected to rise in the first quarter after a long decline.

Italy's economy has not posted a single quarter of growth since mid-2011. Gross domestic product is projected to shrink about 0.4 percent this year, after declines of 1.9 percent in 2013 and 2.3 percent in 2012.