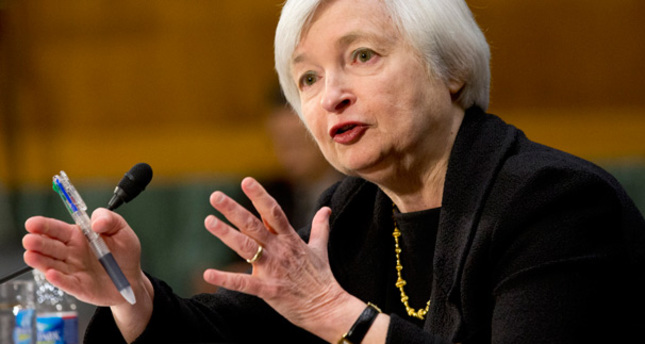 by Şeyma Eraz Dec 19, 2014 12:00 am
Stock markets across the world powered higher yesterday, sweeping aside worries about a flagging global economy after the U.S. Federal Reserve said it would remain "patient" in its approach to raising interest rates.

The positive results of the Fed's decision were also seen in the Turkish financial markets. Borsa Istanbul's BIST-100 index closed the day at 82.895, increasing 2.57 percent as the U.S. dollar continues to slide against the TL.

The dollar was around 2.3140, decreasing 1.01 percent after hitting a historic low of 2.42 per dollar on Tuesday. Speaking to Daily Sabah, economist Taha Meli Arvas said that despite robust numbers in manufacturing and unemployment, the total U.S. employment participation rate is at its lowest percentage in 40 years, which means that of the total number of Americans that can work, only about 62.8 percent are working.

"The participation rate is the one major metric that continues to fall in the United States since the 2008 'Great Recession.' Something is broken in the U.S. economy. That something needs to be changed before interest rates continue to rise" said Arvas.

The world's most powerful central bank is edging closer to raising interest rates from record lows given a strengthening U.S. economy. But it will be "patient" in deciding when to do so. That was the message sent Wednesday as the Fed ended a meeting amid heightened expectation about a forthcoming rate increase.

At a news conference, Chair Janet Yellen said she foresaw no rate hike in the first quarter of 2015. "With a week to go to Christmas, Santa seems to have finally arrived for global equities," said Stan Shamu, market strategist at IG in Melbourne, Australia. "It was always important for the Fed to get the language right so as not to spook markets at such a fragile time and it seems it has done just that."

Russia remained in focus over concerns about the impact of the recent slide in the ruble. The currency has lost more than 50 percent of its value this year as the oil price slump and Western sanctions over Russia's actions in Ukraine hit the Russian economy. After falling again Wednesday, the ruble remained volatile but recovered somewhat and was at 61.90 to the dollar.