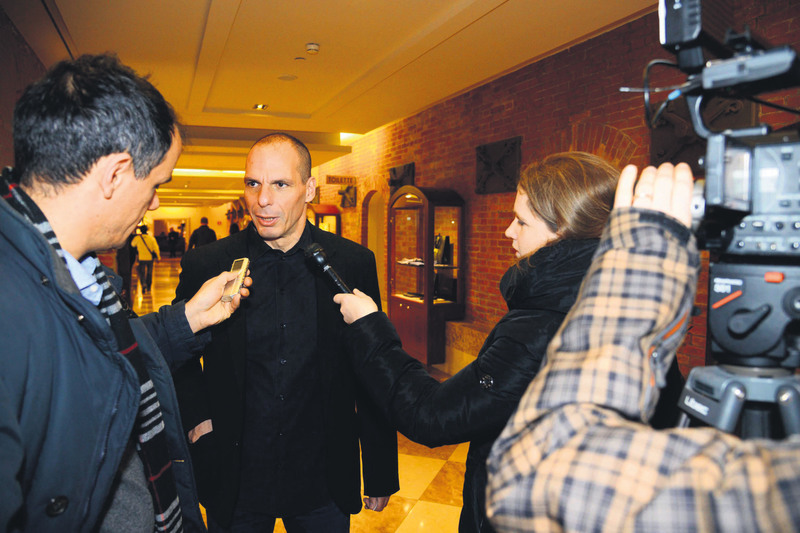 Greece could call a referendum on the euro or early elections should its eurozone partners reject its plan to restructure debt and make public investments to boost growth, the Greek finance minister said

Finance Minister Yanis Varoufakis upped the stakes sharply ahead of today's crucial Eurogroup meeting in Brussels by raising the prospect of new Greek elections or even a referendum on any debt deal. If eurozone ministers do not accept seven major reforms Greece has put forward to unlock the next tranche of its much-needed bailout, "there could be problems," he warned in an interview with Italian newspaper Corriere della Sera on Sunday. "We can go back to elections. Call a referendum," he told the daily. "But, as my prime minister told me, we are not glued to our seats yet."

The last time Greece threatened a referendum on its bailout in November 2011, it sent global markets into panic, infuriated its European partners and led to the fall of then Prime Minister George Papandreou. The veiled warning was echoed by Panos Kemmenos, the leader of the radical Syriza government's coalition allies, the Independent Greeks. "If our creditors raise a question about the support of Greek people, a referendum is an option," the defense minister told Agora newspaper.

The huge public support enjoyed by the far-left government has slipped markedly from 83 percent last month to 64 percent, according to a Marc poll published Saturday. Varoufakis dismissed reports Greece was hoping to secure a new loan in his interview, given on the sidelines of a conference in Venice. He said the country would "not return to the mechanism of loans in exchange for a program to be respected." And he accused the EU of hampering Greece's efforts to pull clear of a deep recession by spooking investors with warnings Athens could crash out of the eurozone.

There was further fighting talk from Interior Minister Nikos Voutsis. He told parliament Friday that Greece "is at war with the lenders... Every month the leash is getting tighter for us. But in this war we won't proceed like happy scouts ready to follow bailout policies," he warned. The Greek ministers' comments came as the European Central Bank took a hard line ahead of the Brussels meeting, saying it would not allow Athens to take out any more of the short-term loans it has been using to keep public services going. ECB director Benoit Coeure told the German weekly Frankfurter Allegemeine Sonntagszeitung that "the ECB cannot finance the Greek government. We're not allowed to. That is illegal." However, Eurogroup Chief Jeroen Dijsselbloem and European Commission head Jean-Claude Juncker took a much more conciliatory line, with the Dutch finance minister responding "positively" to the reforms proposed in a widely-leaked letter from Varoufakis, according to Greek government sources. "We must be sure that the situation does not continue to deteriorate in Greece. What worries me is that not everyone in the European Union has understood how serious the situation is," Juncker told German paper Die Welt.
Last Update: Mar 09, 2015 12:34 pm
RELATED TOPICS