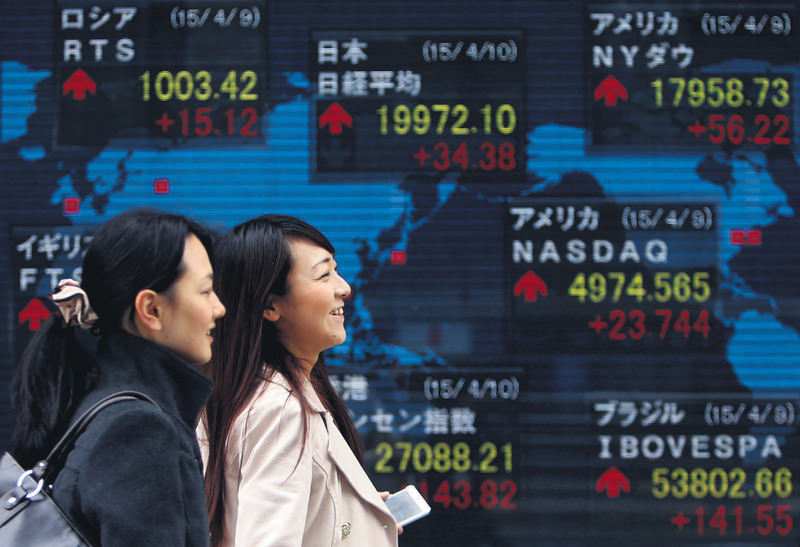 by reuters Apr 10, 2015 12:00 am
World shares tested record highs on Friday as hopes of more easy money from top central banks pushed Japan's Nikkei past 20,000 points for the first time in 15 years and European stocks reached similar heights. The stock market push was set to keep Wall Street going up when it resumes later and complemented more lows for eurozone bond yields after Greece repaid a loan tranche to the International Monetary Fund to keep alive its hopes of more aid.Subdued Chinese inflation also fuelled talk of additional stimulus from Beijing and came after data this week from top economies like the United States and Germany has generally bolstered the view that world growth is slowly perking up. "We are in a honeymoon period for risk assets, and will be for another quarter," said Sandra Crowl, an investment committee member at fund giant Carnignac Gestion.

With the Federal Reserve unlikely to start the process of gradually raising U.S. interest rates until the third quarter follow a softer last couple of months, she added: "There is no reason for us to move out of being fully invested in equities and no reason for us to move out of our predominant positions of the last two years in the European periphery (bonds)." In the currency market, the idea that the Fed will still be the first to move up rates meant the dollar remained king. It was heading for its best week since 2011 against a basket of other top currencies as the euro limped to its worst since 2011 and sterling slumped to a five-year low after poor UK industrial production data. Buoyed by gains in Asia and the latest slide in the euro, the pan-European FTSEuro first 300 share index reached a 15-year high of over 1,640 points as its ninth week of rises in the last 10 took it to its best level since 2000. Germany's DAX also scored a new record high and Britain's FTSE 100, France's CAC 40 and the region's other main indexes all made ground.

Along with the ECB's stimulus programme and the weak euro, news that Greece had made a 450 million-euro loan payment to the IMF and secured extra emergency funding from the ECB for its banks also helped the mood.

Greek markets were closed for an Orthodox Christian holiday, but Greek bonds have seen their best week in two months with yields down almost 3 percent. German Bund yields were also grinding back towards record lows. "There was a bit of relief that they made that repayment yesterday and it looks like they're going to be able to pay that T-bill next week," Rabobank fixed income strategist Lyn Graham-Taylor said. "But the market is whipping around. We're very, very far from any sort of resolution that gets us through the next six months to a year."
Last Update: Apr 10, 2015 11:38 pm
RELATED TOPICS