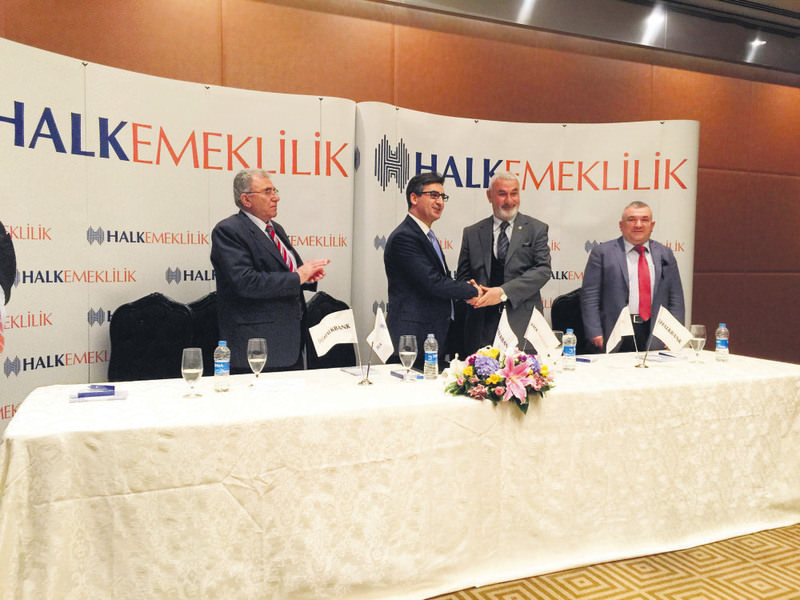 by Merve Aydoğan Apr 20, 2015 12:00 am
Turkey's state-run Halkbank has signed a collaboration agreement between its Private Pension System (PPS) with the Electricity Consumption Aid Workers Cooperative (EKOP) on Friday at a gathering in Ankara. The event began with opening remarks by Nurullah Okur, the general manager of Halkbank Life and Pension. Okur said that Halkbank aims to provide a "financial supermarket" for EKOP members by offering access to make use of all financial services. The PPS is a special pension system that drives individuals to create savings during their working life for a comfortable retirement as a supplement to the Social Security System, providing an additional pension income.

While EKOP Vice President Bayram Eren said at the event that the cooperation has obtained proposals from four other banks and the administrative body of EKOP has decided to accept Halkbank's offer. With the newly signed agreement, EKOP members will be able to include their spouses and children who are older than 18 in the special pension system. In this regard, the agreement provides a profit sharing system to EKOP members in which 1 percent of the profit from average funds growth will be added to the participant's profit sharing system. Additionally, the fund management fee refund will also be able available under the agreement for the participants in the PPS. The PPS is based on collection and investment of savings and payment to individuals as a lump sum payment or a regular pension. The contribution payments that a participant makes to the private pension account are invested in the pension funds one chooses. Starting from Jan. 1, 2013, a state contribution has been applied, which is practiced in no investment instrument other than the PPS. At this point, for each contribution that a person has invested in the system, they will receive an additional state contribution of 25 percent of the amount they contributed, which accumulates in one's state contribution account connected with their contract.
Last Update: Apr 21, 2015 9:46 am
RELATED TOPICS