Deutsche Bank Co-CEOs Jain and Fitschen to step down 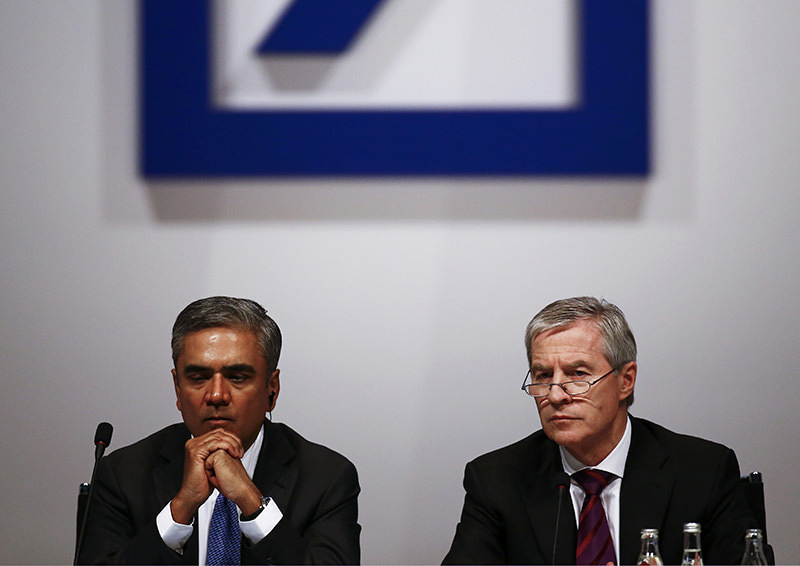 Deutsche Bank co-CEOs Anshu Jain (R) and Juergen Fitschen address a press conference in the headquarters of the bank in Frankfurt, Germany on 27 April 2015 (EPA Photo)
by Jun 07, 2015 12:00 am
Deutsche Bank on Sunday confirmed the resignation of its co-chief executives, Anshu Jain and Juergen Fitschen, who will leave the bank during the course of the next year and be replaced by banking veteran and former UBS chief financial officer John Cryan.

Jain, who has come under fire in recent months in relation to a series of financial missteps and Deutsche's flagging profitability, will officially resign on June 30, but remain with the bank as a consultant until January.

Fitschen, meanwhile, will remain co-chief executive of the bank until its annual general meeting in May 2016.

Jain will be succeeded by Deutsche Bank board member John Cryan, formerly the chief financial officer of Swiss bank UBS, who will take over as the bank's co-chief executive on July 1, 2015, and become its sole head after Fitschen's departure next year.

The news comes two weeks after Jain and Fitschen survived a contentious shareholder vote with the lowest level of support in the bank's recent history.

The vote, which saw the senior executives drawing support from only 61 per cent of shareholders, came against the backdrop of a series of financial missteps and costly legal cases at the bank.

Under Jain and Fitschen's leadership, Deutsche Bank was forced to pay a 2.5-billion-dollar fine for its attempts to manipulate benchmark interest rates such as Libor.