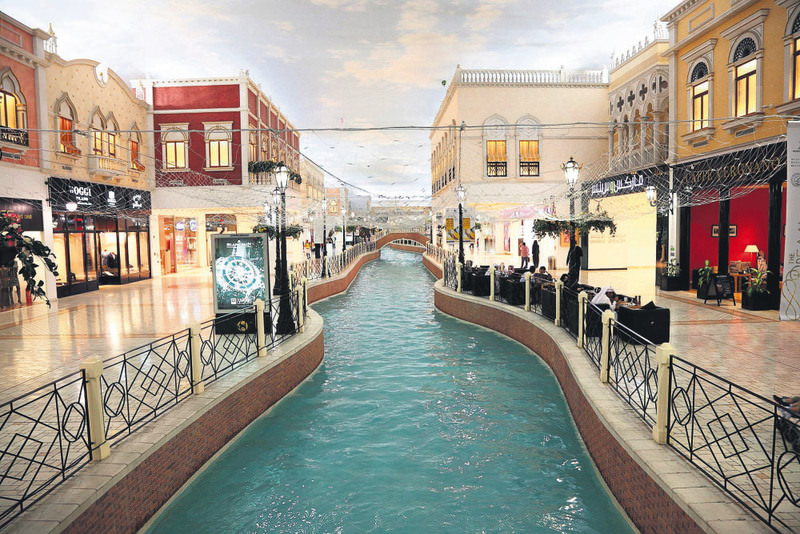 Villaggio Mall Shopping Center in Doha, Qatar. With population growth and an increasing number of expats, Qatar is no longer a market to ignore.
by Daily Sabah Jun 08, 2015 12:00 am

Despite the record drop in oil prices, Qatar is emerging as the most attractive market for retailers in the Middle East and the retail space pipeline remains strong according to the Global Retail Development Index

Qatar is emerging as the most attractive market for retailers in the Middle East, according to a new index produced by AT Kearney. The Gulf state was a new entry at fourth in the latest Global Retail Development Index (GRDI), ahead of the region's shopping hub of the UAE, which boasts two of the world's largest retail hubs, according to arabianbusiness.com.

The GRDI placed a total of six Middle Eastern countries in the top 30 most attractive markets for development opportunities in retail. Following a year that saw oil prices drop, AT Kearney said the region has remained an attractive destination for retailers. As well as Qatar (four) and the UAE (seven, down three places on 2014), Saudi Arabia 17 (down one), Oman 26 (down nine), and Kuwait 27 (down 19) all featured in the index.

The report said: "In the past year, the Middle East has faced substantial economic and political upheaval, and the ranking drops in this year's GRDI reflect the varied environment - market saturation (UAE), increased country risk (Jordan), and GDP slowdown from falling oil prices (Kuwait).

"Despite the record drop in oil prices, retail sales growth is expected to continue. Indeed, the retail space pipeline remains strong, with several major projects underway in Qatar, the UAE, and Oman. Kuwait has felt the impact disproportionately, due to its high reliance on oil and relative lack of diversification."

The study added: "The Middle East continues to welcome international brands such as Macy's (in the UAE) and Harvey Nichols (in Qatar), and expansion from existing retailers." Shamail Siddiqi, principal of the Consumer and Retail Practice, AT Kearney Middle East, said: "The Middle East has once again demonstrated its strength as a region of opportunity for the retail sector. It's clear that strategies implemented by each country has allowed it to flourish. The demographics and mega-projects make this is a very exciting time for retailers in the region to develop long-term success in the Middle East."

Last month, shopping center expert Phil McArthur told Arabian Business that retailers in Qatari malls could make as little as one-third of the sales recorded in Dubai's Mall of the Emirates and only half that of stores in Dubai Mall.

The ultra-luxury brands, such as Chanel, Prada and Gucci, also are uninterested in opening second stores in Doha, despite having an average of three in Dubai, the founder and managing director of shopping center analysts McArthur+Company said, speaking on the sidelines of Cityscape Qatar.

McArthur said retailers in Mall of the Emirates - the most successful super-regional mall in the world - earn an average of $1,800 in sales per square foot each day. The world's largest mall, Dubai Mall, recorded an average $1,000-1,200 in sales per square foot, with stores on the lower levels achieving the higher results.
Last Update: Jun 08, 2015 1:26 am
RELATED TOPICS