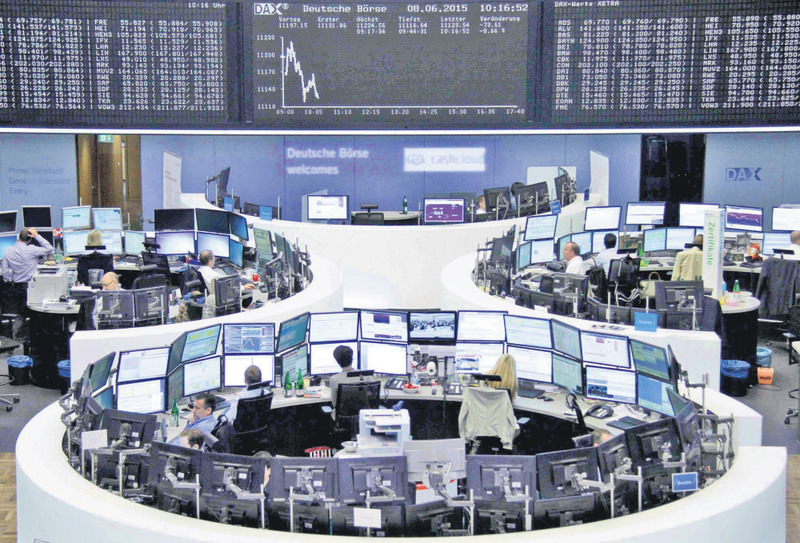 Traders work at their screens in front of the German share price index DAX board at the stock exchange in Frankfurt.
by Associated Press Jun 09, 2015 12:00 am

Fears over a Greek debt default following an acrimonious few days between the government and its creditors weighed on European stocks, particularly in Germany where the main index hit official correction territory

The talks between Greece and its creditors have been deadlocked since late last week, when Greek Prime Minister Alexis Tsipras rejected as unacceptable a proposal made by the three institutions overseeing the country's bailout the European Central Bank, International Monetary Fund and European Commission. Talks are set to resume but time is running out. A solution is needed by June 30, when Greece's bailout program ends and the remaining 7.2 billion euros ($8.1 billion) in rescue loans will no longer be available. Without the funds, Greece is unlikely to be able to repay its debts and could end up crashing out of the euro. Jitters over Greece's financial future have been a cloud over markets in recent days, notably in Germany where the DAX is down more than 10 percent from its April peak that's the official term for a correction. "Once again, the ongoing uncertainty over Greece continues to weigh on sentiment," said Fawad Razaqzada, an analyst at Forex.com.

One German stock bucking the trend was Deutsche Bank, which saw its share price rise by around 6 percent Monday after the company said its co-CEOs, Anshu Jain and Juergen Fitschen, will step down early. The rise follows Sunday's statement from Germany's biggest bank that Jain will depart at the end of this month while Fitschen will follow next May. Their successor will be British banker John Cryan, initially as co-CEO with Fitschen and then in sole charge. Cryan is currently a member of the company's supervisory board.

In addition to Greece, investors are worried about the pace of growth in China, the world's second-largest economy. Figures Monday showed Chinese exports contracting 2.8 percent from a year earlier in May while imports shrank 18.1 percent. China's economy expanded 7 percent in the first quarter, the slowest quarterly growth since the global financial crisis in 2008. The latest data adds to pressure on Beijing to avoid a sharp slump. That helped the Shanghai Composite Index jump 2.2 percent to 5,131.88.