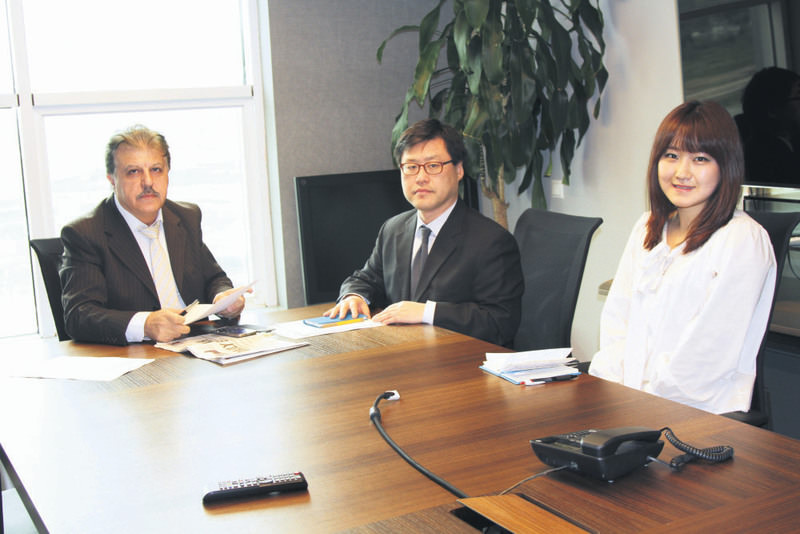 by Hayrettin Turan Jun 14, 2015 12:00 am
The Export-Import Bank of Korea, also commonly known as the Korea Eximbank (KEXIM), serves in 18 countries including Turkey at its Istanbul representative office. In an exclusive interview with Daily Sabah, Seok-chan Cheong, the chief of KEXIM's Istanbul office, said the bank's main reason for opening a liaison office in Turkey is to increase commercial relations between Turkey and Korea. Cheong said that Korean companies have increased their investments in Turkey and there are high expectations about Turkey's growth rates. As of 2014, the number of Korean companies in Turkey was over 100 while the amount of the investments of Korean companies was over $1 billion in Turkey until last year. KEXIM is a policy bank and government institution wholly owned by the Korean government. Specifically, the major shareholders of KEXIM are the South Korean Ministry of Strategy and Finance and the Bank of Korea. Since its establishment in 1976, the bank has often functioned as a government vehicle to fill in market gaps.

As an official export credit agency, according to Cheong, KEXIM strives to play the role as a leading bank for global business, especially in emerging markets, by supporting Korean enterprises with comprehensive export financing programs. KEXIM's biggest investments in Turkey are the credit provided for the Eurasia Tunnel project and third Bosporus bridge project. The Eurasia Tunnel project will connect the Asian and European sides with a highway tunnel underneath the seabed of the Bosporus. The Eurasia Tunnel will serve the Kazlıçeşme-Göztepe route where vehicle traffic in Istanbul is most intense and will cover a total of 14.6 kilometers. KEXIM has provided credit of $280 million for the Eurasia Tunnel and a guarantee of $101 million for the third Bosporus bridge project.

The bank has 800 staff in total and approximately 400 people are based at its headquarters while the rest work at local branches or in overseas countries. The organization is divided into eight groups by function and each group is composed of a number of related departments.

"We have an extremely well-established network all around the world such as 20 representative offices in Asia, Europe, the Middle East and the Americas. We have four subsidiaries in the U.K., Hong Kong, Vietnam and Indonesia. We have a representative office in Saudi Arabia as well," Cheong said.

KEXIM's role in the Korean economy

"The growth path of the South Korean economy is simply astonishing. One of the poorest countries scarred by a civil war has turned itself into the seventh largest exporter in the world. KEXIM was established in 1976 to facilitate the nation's cross-border trade," Cheong said. Riding on this remarkable growth, South Korea has become the ninth country in the world with a record $1 trillion in cross-border trade volume in 2011. South Korea's gross domestic product (GDP) per capita, which was $79 in the 1960s, has exceeded $20,000 50 years later. Thirty-seven years ago, South Korean automobiles were first introduced to the international market with 1,341 vehicles. Now there are more than 3 million South Korean vehicles sold annually on the overseas market. South Korea's display panels dominate the global market share as a market setter in terms of quality 36 years after its first export of color televisions."Without any doubt, exports have been the major driver of the South Korean economy," Cheong said. "Today, many South Korean companies are global leaders in the high-end IT and heavy industries with significant market share in mobile devices, semiconductors, display panels, shipbuilding, automobiles and steel production. Notably, South Korea is home to numerous global brand names including Samsung, Hyundai, LG, and POSCO," he concluded.
Last Update: Jun 14, 2015 11:18 pm
RELATED TOPICS