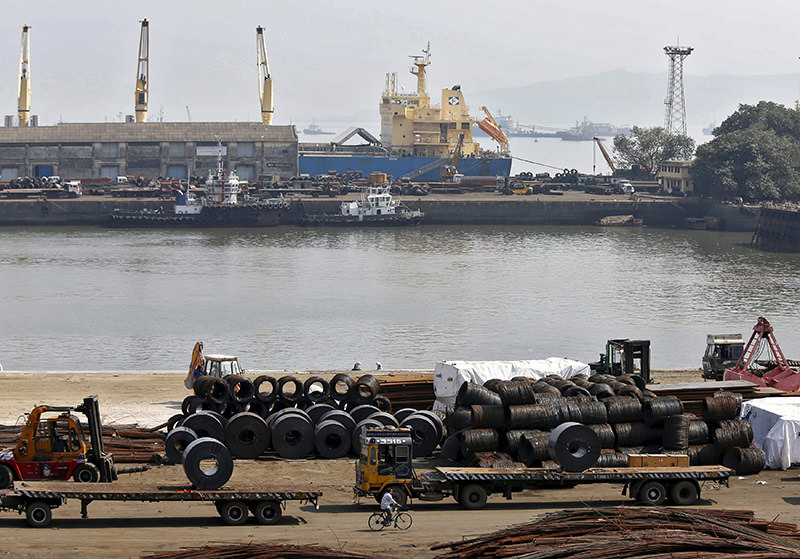 A worker rides his bicycle past steel rims in a dockyard at Mumbai Port Trust in Mumbai in this November 17, 2014 file photo (REUTERS photo)
by Anadolu Agency Jul 14, 2015 12:00 am
Brent crude oil prices fell 2.6 percent Tuesday as Iran and the P5+1 group reached a final nuclear deal that will see the removal of the sanctions on Tehran.

The price of the global benchmark decreased to as low as $56.76 per barrel, after it opened at $58.28 per barrel on Tuesday, according to official data.

A lifting of sanctions on Iran means the country will be able to increase its oil exports, which would raise the glut in global oil supply and create downward pressure on prices.

In addition, Iran is planning to increase its oil production by attracting foreign investment into its oil sector.

Although Iran cannot increase its oil production or exports immediately, this nevertheless creates expectations in the oil market that crude oversupply will rise globally.

"Any positive outcome of the deal will have an immediate downward effect on the prices, even before any actual Iranian production rises," a report by SVB Energy International LLC, a global energy consulting firm, claims.

Iran is estimated to have around 36-37 million barrels of stored liquids, oil and condensate, in floating storages that could be released immediately to the global oil market once sanctions are lifted.