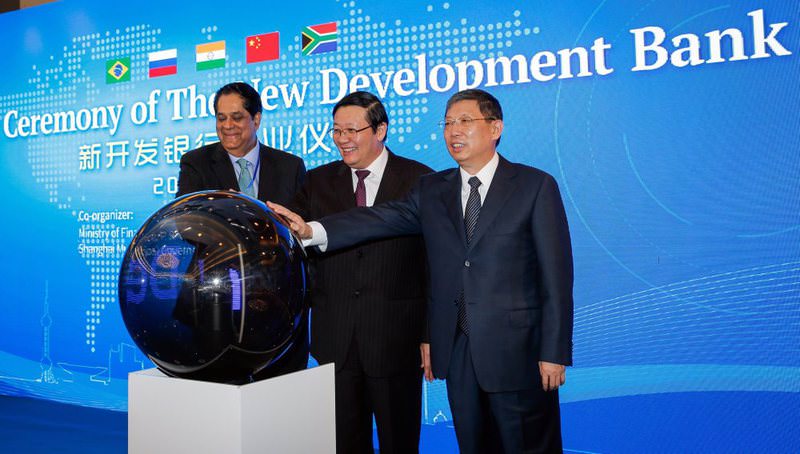 The New Development Banks launched in Shanghai with $100 billion of capital, 41 percent of which was financed by China, as an alternative to other multilateral lenders, particularly to the U.S.-dominated World Bank and IMF

The New Development Bank (NDB), backed by the emerging BRICS nations Brazil, Russia, India, China and South Africa, has been viewed as a challenge to Washington-based institutions.

The NDB's website explicitly describes it as an "alternative to the existing U.S.-dominated World Bank and the International Monetary Fund," which will address needs for infrastructure and sustainable development. China, the world's second largest economy, is also setting up a separate Asian Infrastructure Investment Bank (AIIB).

Chinese Finance Minister Lou Jiwei played down the competitive aspect. "The NDB will supplement the existing international financial system in a healthy way and explore innovations in governance models," he said at the NDB's opening ceremony in Shanghai, as quoted by the official Xinhua news agency.

The bank says on its website that it will have authorized capital of $100 billion, with $50 billion paid in initially.

Xinhua quoted bank President K. V. Kamath, formerly a private banker in India, as saying the institution's management was "working on initiation of operations," including "making business policy" and "developing project preparations." Operations would begin late this year or early in 2016, he added.

The opening comes two weeks after a BRICS summit hosted by Russian President Vladimir Putin. Moscow, which has suffered huge currency fluctuations and struggled to attract investors since the outbreak of the crisis in Ukraine, sees the bank and a BRICS currency reserve pool as alternative global financial institutions. At the time of the summit, Russian Foreign Minister Sergei Lavrov said in a statement that BRICS "illustrates a new polycentric system of international relations," demonstrating the increasing influence of "new centers of power."

The BRICS nations, which represent 40 percent of the world's population, formally agreed to establish the bank at a meeting in Brazil in July last year.

The World Bank said it hopes to work with the newcomer. "We are committed to working closely with the New Development Bank and other multilateral institutions, offering to share our knowledge and to co-finance infrastructure projects," World Bank President Jim Yong Kim said in a statement.

The regionally focused Asian Development Bank also said it would "look forward" to working with the NDB. Chinese analysts denied that the BRICS bank was aimed at challenging other multilateral agencies. "It's a complement, instead of a challenge, to existing international institutions," Li Daxiao, chief economist of Yingda Securities, told AFP. "It can help strengthen currency markets and maintain a stable financial order through the internal stabilization of the BRICS countries," he said.

The other new Chinese-based multilateral lender, the AIIB, will be headquartered in Beijing, and China will be its biggest shareholder with about 30 percent, according to the legal framework signed late last month by 50 founding member countries.

Major European and Asian economies, including Germany, Britain, France and Australia, have joined the AIIB, but the United States and Japan, the world's largest and third-largest economies, respectively, have declined to do so.
Last Update: Jul 22, 2015 2:15 am
RELATED TOPICS