Dollar exceeds 2.75 against Turkish lira amid operations against ISIS 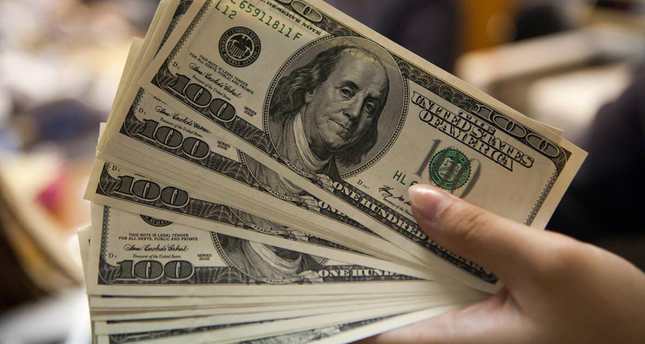 The Turkish lira struggles to keep its value against the dollar despite the central bank's move, while the Borsa Istanbul's BIST-100 index fluctuates amid the Turkish Army's operations against ISIS in the southeast

After Turkish fighter jets bombarded Islamic State of Iraq and al-Sham (ISIS) positions early Friday, the dollar reached 2.75 against the Turkish lira, its highest level since early June as political risks increase.Borsa Istanbul's BIST-100 index was also down at the opening of the second session on Friday. The benchmark index decreased by 182.49 points to open at 78,300.69 points. Stocks on the index lost 0.23 percent in value.

The Turkish military launched airstrikes against ISIS in Syria for 13 minutes early today, destroying two ISIS headquarters and one rallying point with guided missiles. This caused the dollar to reach a one-month high. The Central Bank of the Republic of Turkey (CBRT) lowered the dollar deposit rate 0.5 percentage points to stabilize the currency's surge on airstrikes targeting ISIS in Syria and speculation regarding a high possibility of a November election among political figures in Turkey. "Due to recent global and local developments, the USD deposit rate at one-week maturity has been reduced from 3.5 percent to 3 percent," the CBRT said in a statement. The dollar fell back to the TL 2.74 level, from TL 2.7490 after the central bank's move.

After Prime Minister Ahmet Davutoğlu announced that operations against ISIS would continue, the dollar climbed back to 2.75 against the Turkish lira. "The new rate will be effective from July 27, 2015. At this rate, the banking sector will be able to borrow from the central bank at one-week maturity. When deemed necessary, without any need for a press release, these rates for the USD and EUR will be adjusted in either direction at 9:30 a.m. on business days and will be valid for the same business day," it added. On July 16, the last day before the three day-long Eid al-Fitr holiday, the dollar was around the TL 2.65 level. With the deadly terror bombing in Suruç that claimed 32 lives on Monday, the rate exceeded TL 2.70. Following the news of the death of two police officers in Şanlıurfa province and increased tension throughout the country, the rate exceeded TL 2.7230 on Wednesday.

Lindsey Liddell, the financial institutions director at Fitch Ratings, an international credit rating agency, said it is expected that Turkish banks, according to the basis scenario, will continue to access capital markets in a positive way. During an interview with Anadolu Agency (AA), Liddell suggested that expectations for an interest rate hike in the U.S. might affect Turkish banks' margins, as they are highly dependent on dollar-denominated financing. In total, foreign currency-denominated liabilities, including deposits, constitute more than half of the banking sector's non-equity financing. The net foreign-currency borrowing of banks was in the long-term in 2013, while a major part of outstanding foreign currency debt is in the short-term. The Turkish banking sector, on the other hand, has aspects to resist risk, Liddell said, adding that Fitch's basis scenario suggests that Turkish banks' access to capital markets will continue in a positive way and they will be able to convert their debts. Liddell further stressed that the foreign currency liquidity of banks enable them to have a good position to cope with long-term interruptions experienced while accessing markets. A long and sharp interruption might increase financing risks, she added. Underlining that the recent slowdown in the credit growth of the Turkish banking sector is a positive development, Liddell said Fitch considers moderate credit growth in Turkey in the first quarter of the year a positive sign for the banking sector. The slowdown in credit growth will prevent banks from greatly expanding their financial statements, will help control problems with asset quality and will reduce risks stemming from broader macroeconomic disparities. The International Monetary Fund (IMF) warned banks against interest rate differences that will result from the strong dollar and banks' diversifying policies, underscoring that the atmosphere that will follow falling oil prices, loosening monetary policies in the eurozone and Japan as well as the U.S.'s and U.K.'s interest rate hikes will have risks for other countries. The fund named Chile, Hungary, Turkey, Malaysia, Poland and Thailand, which have high debts in foreign currency, among the countries with high levels of risk.
Last Update: Aug 03, 2015 1:35 am
RELATED TOPICS