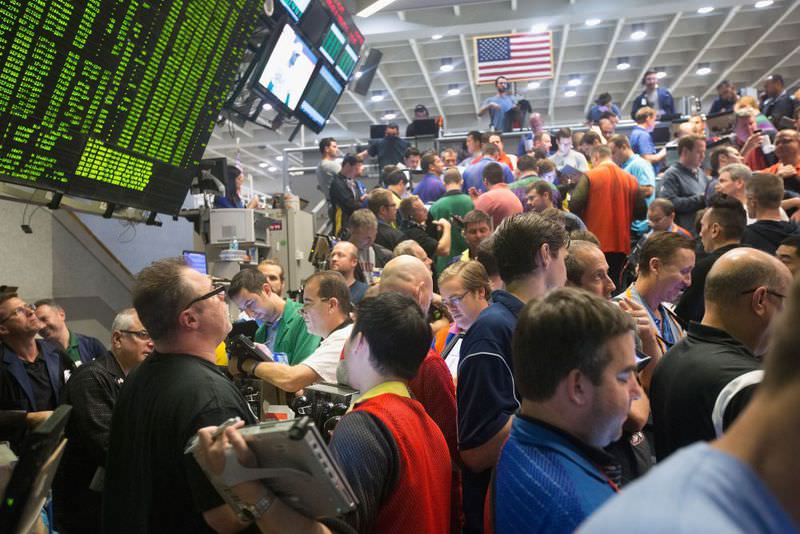 Traders works on the floor of the New York Stock Exchange after the Fed chose not raise interest rates on Sept.17 in New York. Traders had speculated for weeks over whether the Fed would raise rates or keep them at near zero percent interest.
by Sep 19, 2015 12:00 am

Currencies of emerging countries improved after the Federal Reserve's decision to keep rates steady at a historical low, while experts warned against the damage that an eventual rate rise could cause

The US central bank's decision to hold off hiking interest rates sent emerging market currencies and most Asian markets advancing Friday, as concerns eased over an outflow of cash as the global economy suffers a painful slowdown.

After one of the most eagerly awaited meetings in years, the US central bank's head Janet Yellen said the ongoing crisis in China and recent turmoil on world markets had played a role in keeping borrowing costs at zero.

The Fed's decision followed widespread warnings about the dire impact a rate increase could have, with the World Bank predicting this week it would cause a "perfect storm" in financial markets.

It also came despite a string of data in recent months showing the US economy, the world's biggest is well on track to recovery.

Yellen told a news conference: "A lot of our focus has been on risks around China, but not just China, emerging markets more generally and how they may spill over to the United States.

"We've seen significant outflows of capital from those countries, pressures on their exchange rates and concerns about their performance going forward," Yellen said of the emerging market economies.

"The question is whether or not there might be a risk of a more abrupt slowdown than most analysts expect."

The news pushed the dollar lower. It was buying 119.40 yen in Tokyo trade, compared with 120.90 yen in Asia Thursday. The euro was at $1.1433 against $1.1302 a day earlier. Struggling emerging market currencies, which have been rising this week on hopes the bank would hold fire, were also higher. The South Korea won added 0.27 percent, the Malaysian ringgit gained 0.64 percent, India's rupee was one percent higher and the Singapore dollar was up 0.06 percent. The Thai baht and Taiwan dollar also laid on further gains.

"For emerging-market central bankers, the Fed has given them some much-needed breathing room," said Jonathan Lewis, a principal at New York-based Samson Capital Advisors LLC.

"Postponing a Fed tightening gives these central bankers room to be more accommodative, without their actions being offset by a tighter Fed," he added, according to Bloomberg News. Economists had warned a rise now could severely hurt emerging economies as investors would likely withdraw more cash to the United States for better and safer returns. This, in turn, would have forced other central banks to hike rates -- at the same time as trying to foster growth -- in a bid to support their currencies and prevent a flight of capital.

However, analysts pointed out that the uncertainty of when rates will rise could be as damaging to emerging markets as an actual lift off. There is now increasing talk the Fed could wait until 2016 before moving.

Most Asian stock markets advanced with Shanghai ending 0.38 percent higher at the end of another roller-coaster week, while Seoul put on almost one percent and Sydney ticked up 0.46 percent. Hong Kong ended 0.30 percent higher. However, Tokyo finished almost two percent lower with investors spooked by Yellen's downbeat assessment of the global outlook while exporters were also hurt by the stronger yen.

The comments also weighed on US stocks, with the Dow, S&P 500 and Nasdaq all ending in negative territory.

Matt Maley, an equity strategist at Miller Tabak & Co LLC in New York, said that with the decision now out of the way, traders "are going to start focusing more on the problems that caused the correction in August, which is weakness in China and other emerging markets and a rough time on the earnings front".

World markets have witnessed more than a month of wild volatility after China devalued its yuan currency, fuelling worries about the state of the world's number-two economy and main driver of global growth as well as its leaders' crisis control.

The concerns have been exacerbated by a series of weak indicators suggesting growth will come in this year lower than 2014, which was the worst performance in a quarter of a century.

The index surged more than 150 percent in a year before hitting a June 12 high, since when it has plunged about 40 percent on fears about high prices and the state of the Chinese economy.
RELATED TOPICS